Hafting a Tomahawk in the Wilderness

Amidst talk of rain, the two geese Gardant Smith killed, Brazile David returning with the meat of a deer and two otters, and the wife of Ouaisza who was ill, Curot simply says Joseph Boisvert broke his ax. Being more interested in the hunting and game gathering aspects of the journal, I read over this sentence without giving it much thought. My mind was well into the next week’s activities, pondering more ducks, geese and venison haunches, when a little voice said, “Wait a minute, Denny, they broke an ax.”

Neither the passages before, nor those that came after gave any clue as to what Curot meant. At first, I based my interpretation on modern experience; I thought Boisvert broke the ax’s handle, but breaking an ax handle did not seem noteworthy enough to include in the journal, given the unique nature of the other circumstances recorded that day. If a splintered wooden handle was important enough to write about, then there should be similar entries in Curot’s journal, or those of his contemporaries, but I find none. I now believe the iron ax head broke. 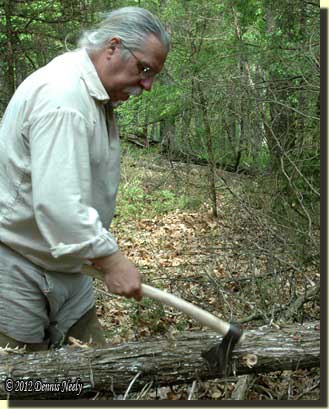 As a traditional black powder hunter, I learned long ago that wilderness classroom lessons have strange beginnings. A few weeks after reading Curot’s journal, a fellow asked a vendor at the Kalamazoo Living History Show for replacement tomahawk handles. Then during spring turkey season I “remodeled” a fallen tree top. As my hawk hacked and hacked, I paused and held the product of David Monds’ anvil in my hands. The handle was a work of beauty: sanded smooth, fire-striped and finished with a dark stain. The handle, at least, was hardly a working woodsman’s tool.

In 1777, William and John Kay outfitted a “Montreal canoe” (35 to 40 foot birch bark canoe) and sent it to Michilimackinac for David McCrea, along with a compete inventory of goods, broken down by bales, crates and kegs. “Case 47” contained axes, tomahawks and other cutting tools, but makes no mention of handles, which would have added unnecessary weight:

In 1966, Claus Breede, a diver with the Quetico-Superior Underwater Research Project, returned to the surface all excited after discovering a submerged crate containing fur-trade era iron axes in the Winnipeg River:

“…Claus Breede surfaced to tell us he had found what appeared to be a large lump or cluster of iron trade axes…” (Wheeler, Voices, 28)

This lump contained 29 axes (Ibid, 82). Portions of the crate’s pine boards still clung to the rusted mass, and Breede’s drawing shows the axes stacked in a manner indicating they were not yet hafted (Ibid, 29).

On the Basswood River, the underwater archaeologists found 36 axes, along with 19 ice chisels and 6 spears.  The recovered ironware weighed 73 pounds, and allowing for rust, the researchers postulated that the find was all part of the same crate (Ibid, 69).

In a later work, A Toast to the Fur Trade…, Robert Wheeler states:

“…Trade axes were imported in great numbers and a variety of sizes. These were shipped to the wintering posts in wooden crates. Handles were fashioned and installed by the buyers.” (Wheeler, Toast, 61) 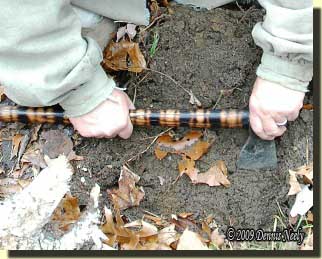 When I purchased the tomahawk, Monds, a seventh generation blacksmith whose ancestors made similar hawks for the Hudson’s Bay Company, explained that the haft’s dark rings were “forge burned.” He stated that when a hunter asked a local blacksmith to forge a new tomahawk or belt ax, the blacksmith furnished the handle. But what of the hired hunter who traded two prime beaver pelts for an ax from a North West Company post in 1794 (M’Gillivray, 31)? Or what did one of Little Turtle’s Miami warriors do when a tomahawk handle broke at the Battle of Fallen Timbers in August of that same year?

I wondered if Monds would be upset as I thumped the grip end of the HBC tomhawk’s handle hard on a melon-sized rock. It took a half-dozen tries to free the head. Following Jonathan Alder’s advice to young Tom Springer, I entered the glade with Old Turkey Feathers, a butcher knife, my blanket roll and the tomahawk’s head, the bare necessities of a backcountry woodsman (Alder, 126). 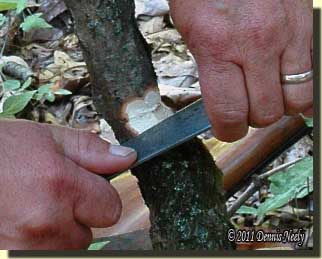 Using the hawk’s eye as a guide, I selected a broken-down wild cherry sapling with an almost straight trunk. I leaned the trade gun against a nearby oak, pulled the butcher knife from its leather sheath and started whittling a “felling notch” in the cherry. The first cuts were shallow and hard; I soon learned two hands controlled the blade better and sliced deeper. I notched around the tree’s little trunk, but grew impatient as the sapling started to wobble and broke it off, leaving a splintered stub. 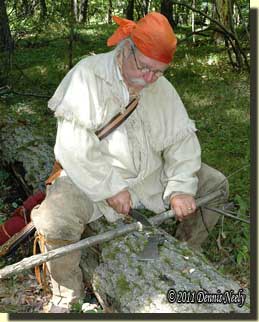 On that warm August afternoon, I sat in the shade on a fallen oak trunk. Using the Biblical cubit, the distance from my elbow to the tip of my middle finger, I measured the cherry sapling, added a couple inches for final trimming and mistakes, then whittled the handle blank to length. 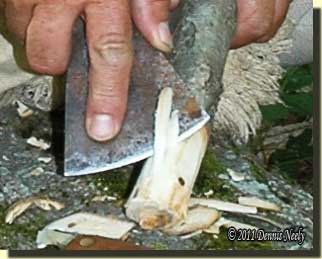 With the haft’s grip end pressed firm against the log, I first tried peeling the bark using the hawk’s sharp cutting edge, but quickly switched to the butcher knife. The blank had a natural curve to it, so I sliced a flat spot on the handle to remind me how I wanted to orient the head in relation to the curve. Long, cream-colored sapwood shavings fell away, and soon the hawk’s teardrop eye slid onto the blank. 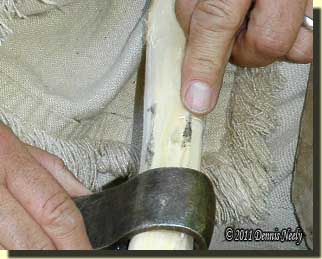 With a few more slices, the forged head moved up the handle. The eye’s inner surface left faint, black marks where the wood was too thick. By whittling away the marks, trying the head again and then cutting away the new black lines, the head inched farther. Halfway up the blank I realized that after removing all of the bark, the head end of the handle might not fit as tight as I wanted. 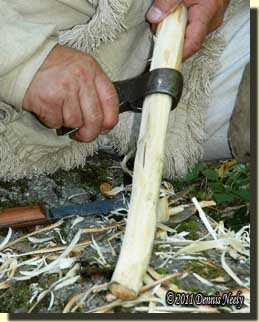 Like most lessons in the wilderness classroom, the quality of the final result is dependent on learning through trial-and-error experimentation. Even though the sapling appeared dead, the wood was still green and shrinkage from drying was a certainty. As the head approached the end of the blank, I stopped with the idea of letting the wood dry out before the final fitting. I wondered if the old woodsmen sped up the final fitting process by slowly drying the blank over the evening campfire, for that is what Native Americans did with fresh scalps. 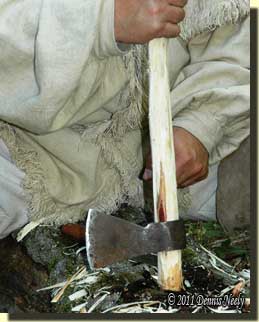 With the eye’s fit still an issue, I decided to continue the lesson, knowing I needed to try again with a larger sapling. For the final few inches, I took thinner cuts with the butcher knife, scraping away fine marks rather than removing too much wood. I pounded the haft’s head end on the log more often, seating the forged eye firm, then thumping the grip end to release it. Finally, I was satisfied. 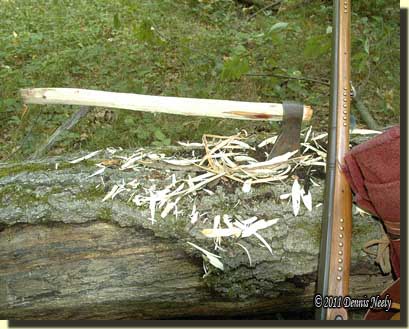 The tomahawk’s head held tight through repeated tests over the next several days. After three or so weeks, the cherry handle seasoned to the point where that no matter what I did I could not keep the head from moving when it struck a limb. The next handle took longer to make, but remedied the first’s imperfections. I now have a tomahawk hafted in the wilderness, a woodsman’s tool that possesses the feel and look that I expect Joseph Boisvert’s ax had.

8 Responses to A New ‘Hawk Handle