Experiencing “daily life” from a bygone era is the essence of any traditional black powder hunt. The trials and tribulations of surviving in the 1790s did not stop when a charger of shot delivered the death message. Backcountry life continued on. Yet, today many living historians do not partake of the full potential of “continuing on after the smoke clears.” Early on, I was such an individual.

The emphasis of my research is on the actual pursuit of wild game in hopes of sharing a pristine moment with one of my hunter heroes. But in the mid to late 1980s, most hunts stopped with the taking of game, just as they had when I started out with the modern shotgun. As I read and studied, I realized this was not the case for our forefathers.

Mark Baker’s early writings introduced me to one classification for hunting camps, at least with respect to the longhunter era of the mid-1700s in the area west of the Cumberland Gap. Baker’s “open” and “closed” station camps are taken from the writings of Reuben G. Thwaites and the recollections of and reflections about Daniel Boone. Baker writes:

“When Elisha Walden and his crew began building their station camp along the banks of Wallen’s Creek, they most likely followed a convenient building style common throughout the Virginia and Carolina frontiers. Since no member of Walden’s brigade left a written record, nothing is certain, but a wide girth of recorded evidence encircles the frontier years which suggests that station camps followed certain time-proven traditions…when woodsmen found themselves ‘upon the move, which meant sleeping in their blankets upon ground wherever darkness or weariness overtook them,’ the travelers referred to such camps as ‘open’ (Thwaites Boone 63). However, as Thwaites elaborates, when hunters remained for sometime in one locality, making a working station and home in some secluded hollow, the men called their semi-permanent shelters ‘closed’ camps (Boone 63-64)…” (Baker, 207) 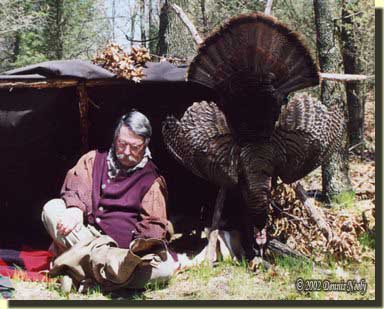 My research into the practices of backcountry hunters in the Lower Great Lakes region during the last decade of the 18th century never included references to “open” or “closed” hunting camps. To the contrary, my hunter heroes spoke of the time spent in a camp, the type of shelter employed and the intended use of that camp. It took a while to realize I was trying to incorporate the names and practices of a different geographical region in a different historical location. With time, the “open” and “closed” camp labels disappeared from my vocabulary.

Mark Baker’s writings often referenced the flowery prose of Joseph Doddridge. In those early years, I put great store in Doddridge’s descriptions of life in the settlements and backcountry of Virginia and Pennsylvania. He addressed the time period from 1763 to 1783, which predated my 1790s romps.

Just as with the longhunters’ camp names, questions arose concerning the relevance of Doddridge’s descriptions with respect to my portrayal of a hired hunter for a local trading post. He wrote of woodsmen and all manner of common folk in the eastern settlements as opposed to the lower Great Lakes region. But his passages and recollections paralleled those of my hunter heroes, and since they predated the 1790s, they came to reinforce other primary documentation upon which that characterization was based.

The hunting camps that weaseled their way into my simple pursuits began reflecting those described by the backcountry woodsmen who wandered in and out of my nightly study sessions. In addition, their comings and goings matched those described in a classic passage from Joseph Doddridge:

“The toilsome march of the day being ended, at the fall of night he seeks for safety some narrow, sequestered hollow, and by the side of a large log builds a fire, and, after eating his coarse and scanty meal, wraps himself up in his blanket, and lays him down on his bed of leaves, with his feet to the little fire, for repose, hoping for favorable dreams ominous of future good luck, while his faithful dog and gun repose by his side.” (Doddridge, 23)

Thanks to Doddridge, the “night-fall camps,” as they came to be called, represent a brief period of time spent in an area with the intent of moving on the next morning. Thus, a night-fall camp is a camp of convenience, and in most cases, of little consequence. The morrow’s camp would be someplace else, intended for one night of use.

The fall of night camps appear in many narratives and are often overlooked in passing. The fur trade clerks—Duncan M’Gillivray, George Nelson, Daniel Harmon, John Sayers, Michel Curot, Francois Malhiot, and others—who form the foundation for the trading post hunter all describe setting up a temporary camp as daylight dwindled.

Likewise, the missives of the returned captives include campsites established while on the move, during a chase or during seasonal migrations. As James Smith writes:

“About the first of December, 1756, we were preparing for leaving the river: we buried our canoes, and as usual hung up our skins, and everyone had a pack to carry: the squaws also packed up their tents, which they carried in large rolls that extended up above their heads; and though a great bulk, yet not heavy…At night we lodged in our flag tents, which when erected, were nearly in the shape of a sugar loaf, and about fifteen feet diameter at the ground. In this manner we proceeded about forty miles, and wintered in these tents…” (Smith, 71-72)

Camp at the fall of night, be safe and may God bless you.