Fifteen years ago, most traditional hunters carried a sewing kit in their shot pouches, hunting bag or knapsack, but that practice has changed. 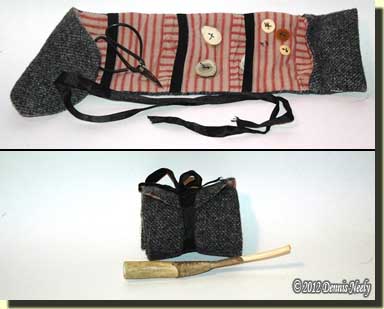 Rolled out, the housewife includes a series of pockets that hold scissors, needles, thread, spare buttons, beeswax, pins or other sewing notions. Rolled up, the housewife is lightweight, but a bit bulky.

Sometimes this kit was a buckskin or linen pouch that contained the bare essentials, and other times it was the more elaborate “housewife,” a small folding wallet made of scrap cloth that holds needles, pins, hanks of thread, thread winders, thimbles, spare buttons and sometimes the scissors and an awl (Gilgun, 16-19). Although a housewife weighs only an ounce or two, the big drawback is that it takes up valuable space, compared to its frequency of use.

The Great Lakes hunters that I try to emulate make no mention of carrying any sewing supplies, other than an awl and the occasional needle. Sewing around the campfire is mentioned, most often associated with moccasin repair, primarily in a station camp or similar setting.

In addition, a living historian’s persona’s station in life dictates the abundance or meagerness of the sewing tools and equipment he or she possesses. It is important to realize this caveat also applies to the resources and supplies carried on a wilderness hunt, whether left in a cassette, portmanteau or snapsack, or packed along on every pursuit.

But based on primary documentation, the fabrication of new garments, and oftentimes the repair of damaged clothes, commonly fell to a woman in the context of the individual’s circumstance: long hunter, trader or Native American. Thus, the majority of sewing activities, other than emergency repairs, took place in a camp, cabin or native lodge.

A needle, thread, a cutting tool, a chunk of beeswax and an awl (not just for leather work) are the basics; scissors, a thimble, a leather finger protector, straight pins, chalk, rulers or other measuring conveniences, or “notions” as they are called, all ease any sewing project, but they may not fit a given persona’s financial means or be readily available.

As an example, a list of gifts (attributed to 1780) to be given to Native American women from the British Indian Department includes “beads, sissors [sic], needles & thread, thimbles, a clasp knife and awls…” (O’Neil II, vol. II, 77-78), which forms the bare necessities of a late 18th-century Native woman’s sewing kit. 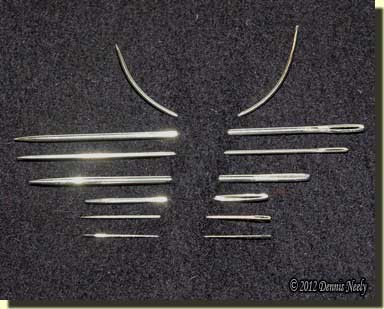 Top to bottom: A curved leather or “glover’s needle, three canvas needles of varying lengths and weights, a blunt tapestry needle, a “sharps” needle and a thin beading needle.

Contrary to most seamstresses’ recommendations, I prefer to use a blunt tipped tapestry needle for both basic fabric sewing and leatherwork. The needles come in a variety of sizes; I buy a package of six assorted sizes from #18 to #22 for about two dollars per package. The tips still poke my fingers, but they are not sharp and don’t draw blood. The eyes on a tapestry needle are large and easy to thread, but they also tend to break after average use in thick buckskin, especially when the holes are not big enough to accommodate the threaded eye. Now and again I find I have to “wobble” the needle to work it through several layers of linen, for example, where a pointed needle will easily pass through the weave, but I’m used to that.

Over the years I have accumulated an assortment of thin beading needles, “sharps,” quilter’s needles and several large needles (three inches long or longer) for sewing packs and canvas. Keep in mind that different fabric weaves and/or weights sometimes require different sized needles, and the smaller the needle, the smaller the stitch one can make. The finished look of the stitches might require a specific needle, or in order to maintain authenticity, a special project may dictate what needle must be used. And an additional consideration is what needles were available in one’s chosen geographical area and time period.

Cotton, cotton wrapped polyester, linen, multi-ply linen, sinew, artificial sinew, and threads from the material itself are all possibilities, again, depending upon the project and level of authenticity (i.e. machine sewn, etc). 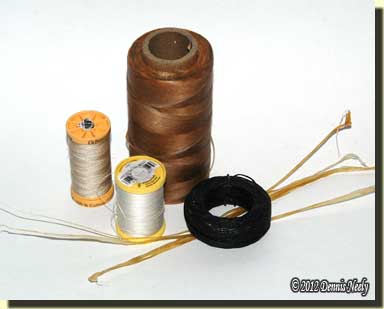 When choosing a thread type, I try to match the choice to the project, guided by the original maker’s preference, if that is known. When in doubt, I often refer to period inventories of trade goods available “for sale” in my persona’s area. I have several lists that I rely on, rather than depending upon one or two, yet even then I find that I am at the mercy of the clerk’s sketchy notation—“2 lb. White thre’d” (Armour & Widder, Crossroads, 201), which isn’t much help.

A number of years ago, a seamstress who is a living historian shared that she used the “warp threads” from the cloth itself. I had never considered this option, and I wonder how often the cloth itself was the thread source in the 18th-century. The lengthwise threads in a piece of fabric are called the “warp” and the crosswise filler threads are the “weft.” I can never keep the two straight; I try to remember that boards warp lengthwise, another construction analogy, but even then, most times that is a lost cause.

At any rate, when examining a new piece of fabric, it is usually obvious which threads are stronger and will work best for sewing thread. An added advantage is the thread is a perfect match color-wise and will take any dye the same as the fabric. And as a warning, do not use 100-percent polyester thread, or any synthetic fiber thread, as it will not take a dye.

Threads come in various weights or sizes, but in practice I have a natural linen thread or a 100% cotton thread that I use for most garments when not using the warp thread. Recently I switched to a multi-ply linen thread for leatherwork, because I found I can separate the plies and create a sewing thread of the proper diameter and strength for the project.

And to be honest, I sometimes use artificial sinew with buckskin when the seam will not show. I realize it is a synthetic fiber, a dreaded “no-no” with respect to authenticity, but I subject my leather accoutrements to hard use. For some high-stress seams the artificial sinew holds up better than linen. It’s getting easier to shun the artificial sinew, but tried-and-true habits are hard to break. 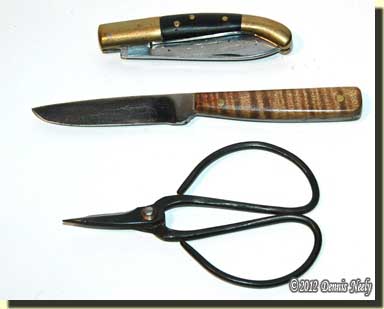 Top to bottom: A common reproduction folding knife, a neck knife and a pair of scissors.

From a traditional black powder hunter’s perspective, the basic cutting tool for any woodland sewing task is a knife, either a butcher knife or a folding knife. A close second choice, consistent with the trade inventories, is a small pair of scissors, like those sold by many living history traders and vendors that are similar to the originals.

But in the case of scissors, taking into account my chosen persona, I find myself wrestling with one recurring question: “If a market hunter owned scissors and carried them on the hunt, where did he keep them?” I have yet to find an answer.

A chunk of beeswax is an important, although often overlooked, sewing item. The beeswax can be the stump of a burned-down candle, a hunk of used beeswax, softened and rolled into a ball, or it can be a modern round cake from the local fabric store’s notions department, less the plastic case.

The sewing thread is pulled over the beeswax cake’s edge, giving a light coating to the outer fibers. I find beeswax keeps the thread’s fibers from fraying, eases the thread through the fabric and helps prevent tangling. And beeswax definitely lubricates heavy linen thread and eases “pull through” on most leather projects. 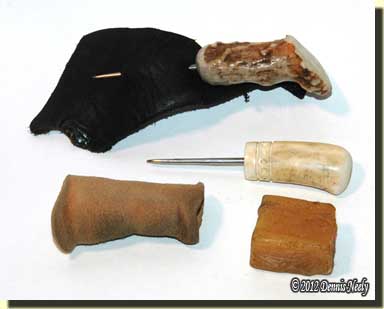 Top to bottom: A stout awl with the point protected by a thick piece of leather, a small awl with a decorated antler handle, a hand-stitched buckskin finger protector and a chunk of beeswax.

The awl is a multipurpose tool that a traditional hunter may or may not stow with his or her sewing supplies. The style and provenance of an awl is, or can be, specific to one’s persona or it might be the simple, hand-forged, offset pointed tool tendered at trading posts and common to archaeological digs across the United States.

An awl is subject to personal preference, and I have two, both with antler handles, one larger than the other. Depending on the portrayal, one stays with my sewing supplies “back at the cabin or lodge,” and the other is carried on my person, either in my hunting bag or split pouch.

For leatherwork, the awl punches a clearance hole in the buckskin or hide for the needle. When sewing fabric the awl is indispensable for pulling stitches sewn in error, for unraveling linen to make fringe or as a quick “pin” to align a difficult seam or stress point.

Again, an alter ego’s historical circumstance should always be the driving force behind any accoutrement choice. A widowed backcountry woman, trying to protect a homestead and raise young children most likely would possess more sewing supplies than a backcountry hunter engaged by the North West Company clerk to supply meat for the trading post’s inhabitants. 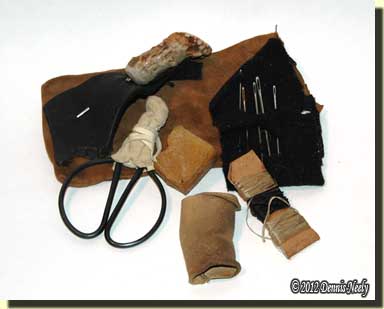 The basics of a traditional woodman’s sewing kit: an awl, assorted needles stored in a wool scrap, thread wrapped around a cowhide keeper, a buckskin finger protector, a hunk of beeswax and a pair of scissors with deerskin protecting the sharp points.

In the widow’s case, an ivory thimble, straight pins, a heavy pair of scissors, a horn needle case, a seam ripper, a forged buttonhole cutter, chalk and a cloth ruler or other measuring device might be considered necessities, depending upon the lady’s expertise and upbringing. In the hunter’s case, such luxuries might be considered frivolous, and yet, that grizzled woodsman just might carry one or two of these items as a treasured remembrance of a beloved and talented wife who took sick and died.

Being right handed, I tend to rest the tapestry needle’s eye against the side of the middle finger on my right hand and use the finger’s muscle/flesh to help push the needle through, either on leather or cloth. I do this without thinking, but in a short while the skin gets red, and if I keep going, a raw sore develops. I tried a brass thimble, but it always seemed awkward. Frustrated with a sore finger, I grabbed a small cutting of buckskin one evening and quickly stitched a leather sleeve that slipped over my finger and covered the affected area. I’ve used a similar finger protector ever since.

Is a leather finger protector period correct? And if so, do any still exist? I doubt it; I’ve never seen one or read of one. Is it born out of experience in the wilderness classroom? Yes, and that is why I keep it with my “period” sewing supplies.

Start a traditional sewing project today, be safe and may God bless you.