Powdery snow exploded. Young white tines sprung up from the doe’s trail. In a heartbeat, maybe two, haunches flexed, and hooves over antlers, the startled 6-point buck fled unharmed. On that snowy December morn in 1977, an errant musket ball changed the course of my life.

In the haunting stillness that always seems to follow a woodland blunder, I succumbed to the enchanting mystique of the old muzzleloader’s orange fire and sulfurous stench. The passage was subtle; deer didn’t matter after that shot. Instead, bare fingers caressed the Zouave rifle’s warm barrel, the oiled walnut stock. I fiddled with the rear sight leaves while my mind wandered far, far away, trying to imagine what it must have been like to hunt the River Raisin’s bottomlands in a bygone era.

Exploring the Overgrown Path to Yesteryear…

The modern me sought quick answers to what turned out to be a complex historical question. A year passed quickly, then one night while reading an old woodsman’s journal, I discovered a passive observer—the historical me—lurking in the shadows of the hunter’s revelations. Night after night, that faint apparition grew bolder, yearning for, then finally demanding, a chance to experience firsthand the forest happenings the ancient hunter wrote about. 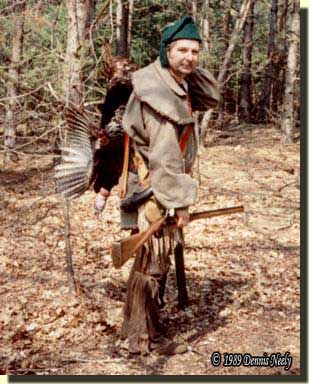 Two muzzleloading deer seasons later, a smooth-bored, flintlock Northwest trade gun, appropriate for the 1790s, replaced the borrowed, 1860-era Civil War musket. However, gallivanting through the glade with a muzzleloader in hand produced few answers to the underlying question: “What was it really like…?”

The historical me decided the best chance for success involved duplicating an authentic, 18th-century hunting environment, and to do so meant exchanging modern garments and accessories for the clothing and  accoutrements described in the old narratives. Linen, leather and wool replaced acrylic fibers, neoprene and synthetic thermal blends. Two-track roads, woven-wire fences and other 20th-century intrusions were avoided. Tree stands and pop-up blinds stayed in the garage. In essence, the technology of yesteryear replaced the technology of today.

The Quest for “Pristine 18th-century Moments”…

Then one morning, hip-deep in sedge grass and marsh elder, I encountered my first pristine, 18th-century moment. A wild tom turkey flushed from under the tangled grasses. In a handful of unbelievable heartbeats, time’s shackles fell away. The English flint rose to attention. The Northwest gun’s tarnished brass butt plate slammed into my shoulder. The muzzle’s turtle sight chased the fleeing fowl, and then, a pulse before my finger released the death sphere, the reality of 20th-century game laws and hunter ethics stepped in and halted the inevitable.

I stood shaking, in the midst of the River Raisin’s wild bottomland. I tried to make sense of what happened. For a few heartbeats, at least, that simple pursuit paralleled the sensual and emotional impressions penned in an almost forgotten journal. The historical me, my “living history persona,” shared an unmistakable, joyous, exhilarating and somewhat bewildering moment of kinship with a long-dead woodsman. In those few fleeting seconds, I gained a firsthand glimpse into “What was it really like…?”