Sorting Through the Confusion

Continued use with little conscious thought sometimes downplays historical importance. As accoutrements go, a “hoppis strap,” “portage collar,” or “burden strap” by any other name falls square in this category.

For most traditional black powder hunters, this leather or woven-hemp strap melts into the overall complexion of the individual’s historical simulation and becomes an invaluable asset that musters little conscious thought. Such anonymity mirrors the narratives of ancient backwoodsmen who wasted few words describing their basic accoutrements. Likewise, mention of the portage collar in the scribbled phrases of my alter egos’ musings is infrequent and scattered at best:

If one of living history’s major goals is to travel back in time and arrive unnoticed among one’s peers, is not a humble accoutrement that disappears within an impression’s context a huge success? 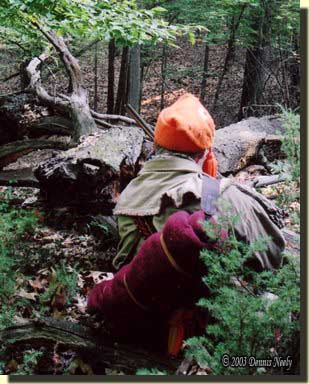 More by luck than diligent research, my first leather portage collar is the sole survivor, other than “Old Turkey Feathers,” of my original persona: a retired voyageur hunting to provide meat for a local trader’s post near the headwaters of the River Raisin in the Old Northwest Territory.

As the voyageur persona progressed, I acquired a red, four-point, Whitney wool blanket with the intention of hand-sewing a capote to ward off the Michigan cold. Before I could hack the blanket apart, the historical me learned how to “wear a blanket,” but carrying a folded blanket while taking a shot at a white-tailed deer or a flushing rooster proved difficult.

About this time, Mark Baker began writing his column, “A Pilgrim’s Journey,” in MUZZLELOADER MAGAZINE. Early on, Baker described his bedroll and how he used a “tumpline” to secure the blanket and its contents, which he carried slung over his shoulder (Baker, I, 10). His bimonthly columns popularized the word “tumpline,” which in his case represented a specific style of burden strap. Unfortunately, “tumpline” became synonymous with any carrying strap, regardless of style, time period, geographical location and/or station in life.

Baker’s leather tumpline seemed like a good solution to my blanket problems, but as luck would have it, I did not have an appropriate piece of leather. In the meantime, I kept researching voyageurs and turned to Grace Lee Nute’s classic book, The Voyageur, which in the mid-1980s was considered the bible for Great Lakes voyageur-type re-enactors. Nute paraphrased the description of a “portage collar” taken from the September 18, 1832 entry in Sherman Hall’s diary :

“For portaging, a sort of harness, called the ‘portage collar’ was used. This consisted of a strap of leather about three inches wide, to which smaller straps were attached of sufficient length to tie around the packages…” (Nute, 47)

The late Chuck Leonard introduced me to The Museum of the Fur Trade Quarterly. In the Summer 1980 issue, Charles Hanson, Jr. published an article entitled “The Portage Collar.” Hanson quoted Malcolm McLeod, the editor of Archibald McDonald’s fur trade journal, who wrote:

“…the collars were of strong, stiff tanned leather, eighteen inches long and four inches wide at the center (broadest part) with ten foot straps of the same leather, tapering from two inches to a half inch in width, sewed to each end. He added that the best collar had the center part and two or three feet of each string made in one piece and the rest of the strings made of finer leather to tie easily.” (MFTQ. Vol. 16: No. 2, 3)

Leonard also showed me a copy of James A. Hanson’s Voyageur’s Sketchbook which included a loosely dimensioned drawing of a “Tumpline (collier or portage collar)” that carried the following footnote:

In hindsight, my research techniques and documentation sources at that time were limited—everybody’s were. Despite possessing a rudimentary understanding, I realized Baker’s longhunter persona differed in many ways from my Great Lakes voyageur. The tumpline he used was not the same item as the portage collar I was reading about, and I felt the latter was more in keeping with my new-found hunting companion. As I say, more luck than astute research.

By the time I found a cowhide cutting on a trade blanket, I had abandoned Mark Baker’s design and set about combining the descriptions of Nute/Sherman Hall, McLeod/Archibald McDonald and the James Hanson illustration. I measured across my chest and back to where I thought the blanket roll should ride. Based on that dimension, I cut the brow band forty-two inches long and three inches wide in the center, tapering to two inches at each end.

I stitched two pieces of the same leather together to make the tails, which are a few inches under eight feet long and taper from one inch to one-quarter inch. The one inch ends are sewn to the brow band. The entire strap was treated with neatsfoot oil, and after twenty-five-plus years of faithful service, the leather is still soft and supple, yet strong enough to drag a white-tailed buck from the glade in the manner Colonel James Smith described (Smith, 81).

Thoughts and Considerations to Ponder…

The first concern of all living historians is safety. Safety is especially important for traditional black powder hunters who push beyond re-enacting to the actual taking of wild game in a woodland setting. The few narratives that I relied upon told of placing the brow band upon the forehead to carry any kind of load. I resisted that temptation, and still do, because I did not wish to risk injury to my neck.

Further, my primary need for the portage collar was to transport the blanket roll. I surmised lugging the bedroll around the forest with the brow band across my forehead would prove just as disruptive and unproductive as carrying the blanket folded and draped over a forearm. On many sojourns the portage collar’s wider center passes over my right shoulder, across my chest and under my left arm, the opposite of how I carry my shot pouch and horn (being right-handed). This practice distributes the weight of the shot bag, horn and blanket roll evenly on both shoulders, and I find it more comfortable for still-hunting or long-distance traveling. 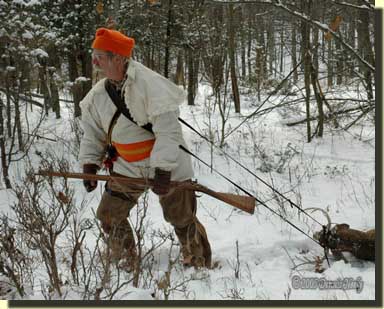 For short forays, I rest the collar’s brow band across my upper chest and around both shoulders. This method restricts upper arm movement to some extent and hampers mounting the Northwest gun in a fluid manner. I reserve this technique for situations when the probability of a quick shot is low or when the portage collar is used to pull heavier weights such as skidding a canoe or bateau, dragging a deer out or transporting bundled shelter rafters to a campsite.

Spreading the burden across the chest distributes the load evenly on the upper body and the effort feels more natural without putting undue stress on the spine and especially the neck. And from later research I learned utilizing the upper body and/or shoulders is period- correct.

In 1790 Charles Johnston was captured by Indians on the Ohio River, near the Scioto River. He was ransomed at Detroit and returned to New York City where he was interviewed by George Washington. Published in 1827, his captive narrative includes a footnote where he describes a “hoppas strap” used by the Native Americans and tells how the brow band crossed the chest:

“…The hoppas is so tied to the pack, that the ornamented portion passes over the breast and upper part of the arms, and is all that can be seen in front…” (Johnston, 38)

But looking further, Johnston’s description of a “hoppas strap” closely resembles the portage collars of Nute/Sherman Hall, McLeod/Archibald McDonald and the James Hanson illustration, raising a second concern: the proper name for this accoutrement:

“The hoppas is a strap, fourteen or fifteen feet long, by which the pack is secured to the back. It is about two and a half inches wide in the middle, and gradually narrows towards each end to the width of one inch, or three-fourths of an inch. A length of near two feet, in the middle or broadest part, is very closely woven, and neatly ornamented with beads and porcupine’s quills, stained of various colors, and tastefully wrought into fanciful forms…It is curiously plaited by the hand, and is made from the bark of a wild plant closely resembling hemp, and quite as strong.” (Ibid)

From the mid-18th century through the close of the 19th century, backcountry observers describe these pack straps by a variety of names: burden strap or band, carrying belt, strap or string, squaw line, hoppus, hoppas or hoppis strap, matump, tumpline, tump strap, portage sling, and of course, portage collar. No doubt there are other names hidden in journals and narratives of other ancient woodsmen, and attempts to clarify the intended meaning by editors and writers often muddy the waters, rather than clarify them.

For example, the tumpline Mark Baker introduced and illustrated appears to be based more on militia or military use, at least up through the American War for Independence. Baker illustrates a leather belt with a hole in each end with a braided rope or buckskin thong attached to one hole. This rope or thong secures the load or slips through a rolled blanket and is then tied to the other end of the leather belt. (Baker, I, 11)

In contrast to Baker’s tumpline and in comparison to Nute/Sherman Hall’s portage collar, “hoppus strap” seems to apply to a woven strap, as described by Charles Johnston, used or closely associated with Native Americans and constructed by weaving natural fibers.

But at the end of his “List of Supplies” for the Corps of Discovery in 1803, Meriwether Lewis adds in “Dress’d leather for Hoppus-Straps.” (Brandt, 432) So can I call my portage collar a hoppus-strap?

Likewise, Joseph Doddridge retold the story of the taking of two brothers, John and Henry Johnson in the fall of 1793. At night the boys were “…made to lay down together. The Indians then placed their hoppis straps over them…”

What appears to be a later editor’s footnote attempts to clarify Doddridge’s mysterious hoppis strap. In typical muddy fashion, this footnote mixes three names together, plus states as fact that hoppis straps were synonymous with prisoner ties, which is contrary to current thought:

“A hoppis strap was probably the tump-line strap, or burden band, carried by all Indian hunters and travelers in the early days. It was both used to carry burdens and fasten prisoners…” (Doddridge, 237–238)

In part, the confusion arises based upon the observer’s (or editor’s) background, woodland experience and to some degree, time period. Yet, despite the sketchiness of a narrator’s choice of words, the use of a burden strap by whatever name appears to be more common than many re-enactors think. This is an important consideration for the traditional black powder hunter.

In the end, a living historian bent on re-creating a hunter hero’s exploits must pay careful attention to match the name, the material and the construction technique to the implement he or she chooses—and be ready to support those choices with solid primary documentation, existing artifacts and period illustrations based on a persona’s time period, geographical location and societal station in life.

Thus, by luck, the term “portage collar” best fits the leather burden strap of my current trading post hunter persona, centered in the lower Great Lakes region, near the headwaters of the River Raisin in the Old Northwest Territory of the 1790s.

And with the development of the returned native captive persona, that of Msko-waagosh the Red Fox, the portage collar name has changed, but not the design. John Tanner implies his pack strap was made of leather, and he referred to it as a “carrying strap.” (Tanner, 171) Now I just have to get used to scribbling “carrying strap” instead of “portage collar” in my journal…