A Wool Breechclout, Plain and Simple

The breechclout attributed to Sir John Caldwell’s famous portrait, “III-X-248,” has the best description with regards to size and the materials used:

“118: Breechclout: Made of blue stroud, the middle portion backed with unbleached cotton. Ends decorated with edging of white glass beads and appliques of silk ribbon and wool tape in green, mauve, and deep pink. Sewing is with cotton thread and indigenous vegetable fibres. L 127 cm…”(Brasser, 130)

The question of “social standing” plays an important role in defining and reproducing any artifact, and the answers gained from careful research must contribute to a meaningful and believable portrayal. The question of how ornate a returned native captive’s breechclout, worn in the lower Great Lakes region in the 1790s, and the importance of the Caldwell examples will be expanded upon in the discussion about adding ornamentation to a breechclout. This discussion focuses on the breechclout’s physical attributes only.

From my research, I had little doubt the final breechclout design would display ornamentation consistent with the Ojibwe style, but I did not want to spend the time hand-sewing ribbons and/or beads only to find the garment was not a good fit for my stature and the hard hunting I engage in.

In addition, the construction of a breechclout suitable for the returned native captive persona starts with making the basic garment. I find no documentation that indicates such an individual would not hunt with a basic breechclout. To the contrary, Oliver Spencer describes Simon Girty visiting Blue Jacket, the Shawnee chief, at his village along the Auglaize River:

“…[Simon Girty] wore the Indian costume, but without any ornament…” (Quaife, 92)

The context of Spencer’s comments raises additional questions and leads to other suppositions, but on that particular day it appears Girty dressed plain and simple. And for those who are not portraying a returned native captive, the steps for creating the basic breechclout will produce a clout suitable for a backwoodsman of Irish lineage living and hunting somewhere in the western border country of New York State, or into the upper Ohio wilderness, or even off near the headwaters of the River Raisin in the Old Northwest Territory. Again, the decision depends on an alter ego’s time period, geographical region and station in life. 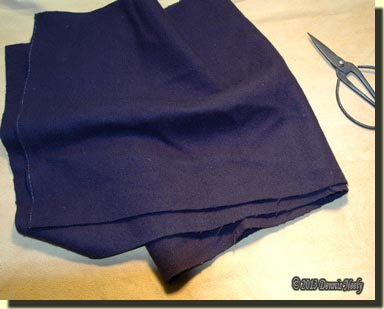 After washing in mild soap and water, rinsing and air-drying outside, the fabric was smoothed by hand and ready to cut.

The first concern with the breechclout project was getting the size right from both the historical and personal fit perspectives, which I viewed much like trying on clothes at the department store. Too large is not good, but neither is too small.

John Rutherford described the breechclout he was given as “a piece of blue cloth about a yard and a half long and a foot broad,” which is 54 inches by 12 inches. Sir John’s clouts measured roughly 51 inches and 50 inches, with the latter being 15 inches wide. From my early voyageur persona days, I had a wool breechclout that measured 56 inches by 14 inches. Being of average height and build, I felt that clout was a bit long and a tad too wide when hunting in heavy brush, thus establishing a maximum size. 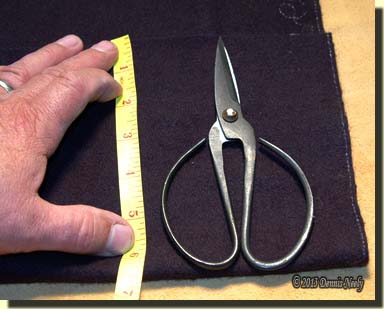 After folding the wool lengthwise, the fold was measured at close intervals to make sure the cut would be uniform.

The “future projects fabric stack” included a piece of dark blue wool that happened to be 54 inches long and 28 inches wide. After hand washing the wool in mild soap and water, rinsing it twice and lightly wringing out the excess water, I laid the fabric out to dry in the shade. The wool shrunk about an inch and a half in length, which was less than I expected.

With the washed and dried length established at a little over 52 inches, I folded the wool lengthwise and made sure the ends were even. Half of the 28-inch width would yield two clouts from the piece, but I already knew from experience that 14 inches was too wide. I adjusted the fold to 6 1/2 inches using a tape measure and checked that dimension the full length of the fabric to make sure the fold would yield a uniform width. After pressing the blue wool flat with my hands, I cut along the folded-over edge with a pair of scissors. The end result was a length of blue wool 52 1/2 inches long and 13 inches wide.

Lessons in the Wilderness Classroom

Once cut, the first question that came to mind was “Did they bind or hem the edges to prevent unraveling?” 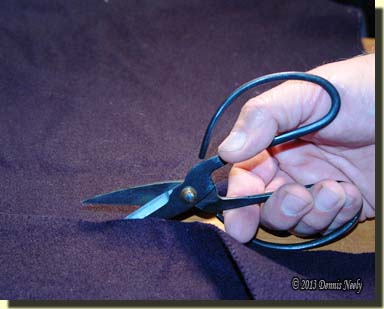 Cutting the full length of the fold’s exposed edge resulted in a breechclout twice the fold’s width, or in this case 13 inches.

My research did not find an abundance of 18th-century breechclouts, other than those attributed to Native American makers. The existing artifacts had ribbon binding or bead work along the edges of the flaps. It appeared to me this served two purposes: it bound the edge and thus prevented unraveling, and it provided ornamentation that added a unique individuality to each clout, either intended or not.

My experience with wool is limited. By observation, washing the wool tightened the weave a bit. Gentle tugs at the cut edge failed to pull a warp yarn free. Further, the blanket I wear in the winter has a bound edge. The wool trade shirt I use is made from an old blanket and the hem is rolled and sewn. The seams of the wool weskit my trading post hunter persona uses are all finished, too. To my delight, I had little choice but go hunting and experiment in the wilderness classroom.

Following John Rutherford’s instructions, I tied a buckskin strap around my waist, slipped one end of the clout through the back of the strap and let it hang a foot or so over my rump. After passing the other end “betwixt” my legs, I slid the flap under the buckskin strap, snugged the clout up and let the flap fall where it may. The clout was longer in the front than in the back, so I evened out the flaps, donned a trade shirt, moccasins, leggins, “Old Turkey Feathers” and struck off squirrel hunting. 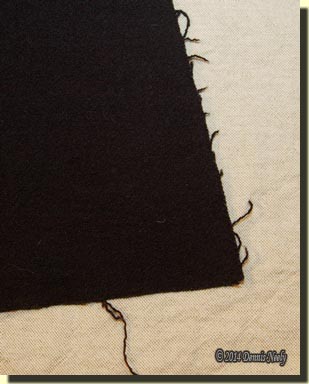 After a seasons worth of hunting adventures, the wool breechclout’s unbound edges showed modest fraying.

My original intent was to try the breechclout for two or three hunts, adjust the size and then adorn the garment with hand-dyed silk ribbons. Well, the squirrel forays blended with waterfowl adventures and wild turkey ambushes, then the fall white-tailed deer seasons came and went. After all that, warp and weft yarns hung from all the clout’s cut edges, not in excess, but enough to be a semi-constant irritation.

One of the lessons learned from that fall’s hunting excursions was that the edges of a plain wool breechclout should be bound and further, that that should be the case with any clout—linen, cotton, linsey-woolsey, etc.. A simple whip stitch would suffice; folding the edge over and hemming it might be better.

And based on actual hunting experience and after revisiting some of the period artwork consulted in the original design phase, I adjusted the final length to 50 inches and the width to 10 inches. Again, this size fits my stature; the look when worn matches period paintings and illustrations, is consistent with written primary documentation and is similar in dimension to existing museum artifacts.

It is important to note that these dimensions include no allowance for hemming, because for my testing I knew silk ribbons would eventually bind the clout’s edges. For a linen breechclout, for example, I would add at least 3/4-inch to the width and length to allow for hemming, perhaps more depending on what type of hem was used.