Assembling an alter ego’s wardrobe demands patience. Yes, there are reputable vendors or living history trade fairs where a traditional black powder hunter can acquire an entire set of history-based clothing. But knowing what to buy, or what to make, is often a problem for individuals wishing to wrap themselves in period-correct garb.

Some character types come with more primary documentation than others. In addition, current published research might shed light on a specific person’s life or offer general guidelines for a particular occupation and/or social group, such as French voyageurs, British rangers or Shawnee villagers. Yet, even when attempting to portray a flesh-and-blood character of historical significance—Boone, Girty or Kenton—the task of choosing proper 18th-century attire is never simple.

And to add to the consternation, the best of the old journals and narratives still contain gaping holes, always in the area one needs the most guidance with, or so it seems. In the end, if one wants a true and meaningful personification, one must search out a number of primary documentation sources and use a combination of the written word, period paintings or illustrations and existing artifacts.

Again, using the returned captive persona as an example, I needed to define what type of breechclout fit my new persona. For those unfamiliar or new to traditional hunting methodology, it is best to step back a bit and ask the question in a broader sense: “What would this 1790-era person from the lower Great Lakes region wear for a garment to cover the lower torso?” The question changes as the persona emerges: “…the upper torso,” “…the feet,” “…the legs,” “…the head,” “…in winter,” etc. 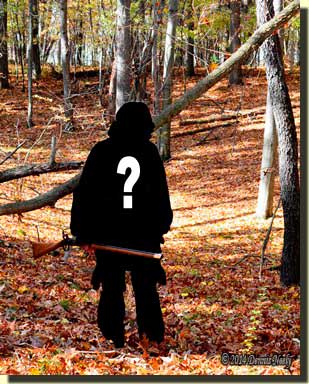 Having chosen a suitable character as a hunting companion, the traditional woodsman, in his or her new role as a living historian, must determine the answers to these questions, keeping a watchful eye on the persona’s chosen time period, geographical location and social standing. Notice in the previous paragraph I loosely applied this guideline: “1790-era,” “lower Great Lakes” and “returned captive.”

From extensive reading and study, there was a high probability the common lower torso garment for a captive was the breech-clout. After their return, many captives chose the clothing of “civilized society” for daily wear, but some did not, choosing instead to retain the basic elements of Native dress. But again, let me step back to the beginning and walk through the process I used to come to this conclusion.

The first task is to review primary documentation (narrative accounts, drawings or actual items described, used or created by historical individuals who actually lived the life) in search of answers to a particular question, like the one posed above. It is best to understand from the outset that a given hunter hero’s writings rarely give a complete description of a specific article of clothing, and only on rare occasions offer step-by-step instructions for making or using that garment.

I started by reviewing the narratives of my three main sources, the journals of John Tanner, Jonathan Alder and James Smith, for any mention of what they wore on their lower body. As I just warned, my primary hunter hero, Tanner, does not say what he wore, but he does mention a “breech cloth” in a context that leads one to believe that was the common lower body covering within the Ojibwe/Odawa society. In this instance, he is speaking of his adopted brother at a graveside:

In his introduction, Larry L. Nelson, the historian who edited A History of Jonathan Alder…, outlines a series of problems with the manuscript. Alder dictated the original manuscript to his son, Henry Clay Alder, but that copy was lost. After Alder’s death in 1849, Henry Clay Alder “recreated” the manuscript based on his memory of the stories told by his father. Nelson summarizes the history of Alder’s story with the admonition:

I mention this background caveat, because the credibility of each source must be questioned if an honest portrayal is desired. Nonetheless, the overall story told through Alder’s journal helps support the creation of a returned captive character. At Alder’s adoption ceremony the Henry Clay Alder version, the one taken from his son’s memory, relates:

“After she got through washing me, she brought out a new suit of clothes that I suppose she had been preparing for a week before. I was dressed all up from head to foot with the finest of goods in perfect Indian style: brand new moccasins very ingeniously made and covered with beads and silver buckles, and a silk handkerchief tied on my head…” (Ibid, 45)

Henry Howe’s Historical Collections of Ohio… includes a “breech-clout” in the clothing list given to Alder at his adoption. Howe states he took his information from the original manuscript dictated by Jonathan Alder: “It was about one hundred MSS. pages and I copied from it all that was of value.” (Howe, 168) Howe’s version says:

“…His Indian mother thoroughly washed him with soap and warm water with herbs in it, previous to dressing him in the Indian costume, consisting of a calico shirt, breech-clout, leggings and moccasins…” (Ibid, 170)

In Scoouwa, James Smith mentions his breechclout as a part of the preparations he underwent after his capture and before the ceremonial washing in the river:

“…then they ordered me to strip off my clothes and put on a breech-clout, which I did…” (Smith, 29)

Smith was led up to the council house, then given a new set of clothes:

“…They gave me a new ruffled shirt, which I put on, also a pair of leggins done off with ribbons and beads, likewise a pair of mockasons, and garters dressed with beads, Porcupine quills, and red hair—also a tinsel laced cappo…” (Ibid, 30)

As Smith’s narrative continues, he cements the “commonality” of the breechclout in his circumstance as a captive and daily life among his adoptive family:

“In the morning early we left camp, and about sunrise we started after them, striped [sic] naked except breech-clouts and mockasons…” (Ibid, 56)

And further: “I stripped off my blanket, (which was all the clothes that I had, excepting a breech-clout, leggins and mockasons,)…” (Ibid, 77)

Then later in life, James Smith was appointed captain of a “company of rangers” charged with protecting the settlers in the Conococheague Valley in backcountry Pennsylvania and he says:

“…As we enlisted our men, we dressed them uniformly in the Indian manner, with breech-clouts, leggins, mockesons, and green strouds, which we wore in the same manner that the Indians do…” (Ibid, 121)

While researching, I came upon a passage in the journal of Oliver M. Spencer, taken captive in the summer of 1792. I found this particular passage significant, because it falls in the early part of my chosen time period, takes place at the Maumee River not that far south of the River Raisin, and represents regional clothing choices (“full Indian costume”) for cold weather wear, of particular importance for those of us who hunt in Michigan:

“The weather had now become cold and my summer clothes, being not only too thin for the season but nearly worn out, were thrown aside; and a white shirt, blanket capote, blue leggings, and a waist cloth supplied their place, so that I was dressed in full Indian costume.” (Quaife,117)

As a corroborating point for this example, continued reading produced a number of other statements that dealt with captives wearing a breechclout. John Rutherford’s captive narrative, taken from the time of Pontiac’s siege of Fort Detroit in 1763, again of regional importance, gives a reasonable “how-to” description for wearing a breechclout:

“…his father stripped me of my clothes and told me I should wear them no more, but dress like an Indian. He accordingly gave me a blanket and breech-clout, which is a piece of blue cloth about a yard and a half long and a foot broad [54 inches by 12 inches] which they pass though betwixt their legs, bringing each end under a belt which is round in the middle for that purpose…” (O’Neil II, vol. I, 32)

After securing “written word” primary documentation, the research effort moved on to the second step for defining a proper breechclout, examining “period paintings and illustrations.” There are many examples of breechclouts displayed in 18th-century artworks. The period oil painting of Sir John Caldwell seemed a natural first choice, again invoking the emphasis on the “persona’s chosen time period, geographical location and social standing”.

Caldwell served as an officer in the King’s Eighth Regiment of Foot assigned to Fort Detroit in the decade before my characterization, the 1780s. He spent a fair amount of time coming and going from among the Ojibwe people. Like some British officers, he amassed a sizeable collection of artifacts, and after returning to Ireland an unknown artist painted his likeness adorned with the clothing and accoutrements he took back.

The now famous portrait, Soldiering for the King, 1780, shows Caldwell fully outfitted in Indian costume, as O. M. Spencer called it. In the late 1970s, a traveling art exhibit sponsored by the National Museum of Man (now called the Canadian Museum of History) in Ottawa, Canada, included many of the artifacts worn in the painting, including the breechclout. “Bo’jou, Neejee!” Profiles of Canadian Indian Art by Ted J. Brasser, the book that chronicled the exhibit, shows an image of the breechclout, a short description of the construction and a length of “127 cm,” or 50.8 inches (Brasser, 130). 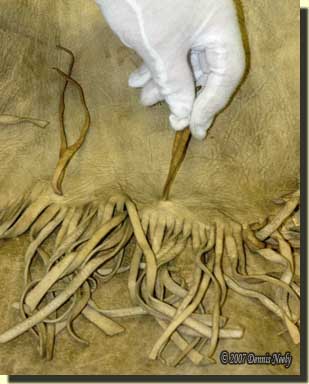 Examining the construction techniques used for a brain-tanned dress, housed in a museum collection. The dress is attributed to the Miami in the late 18th or early 19th century.

In this case, the search for images overlapped the quest for “existing artifacts,” the third step needed to define a proper accoutrement, and that is a common occurrence. In the end, the breechclout’s design took shape based on a combination of the written word, paintings and illustrations and existing artifacts.

At the same time, the emphasis of the research centered on adopted whites living among the Ojibwe in the Lower Great Lakes region prior to or during the last decade of the 18th century. Armed with a good idea of the breechclout my new persona needed, it was time to begin creating the reproduction.