Early in my journey back to the 18th-century, I was talking with Roy “Pa” Keeler and expressed frustration with wool leggins—my first pair tore apart after a year’s worth of moderate wear. “Try buckskin,” Pa said. Although he did not ask further, I later learned that I had used inferior fabric, a blend of wool and synthetics that offered about as much protection as crafter’s felt. 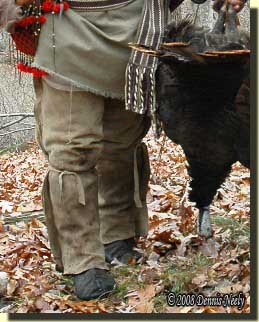 I thought about Pa’s advice, then started to stitch in earnest. The buckskin leggins took a few evenings to complete. Eager to try them out, I cut two ¾-inch strips from the leftover hides to serve as “temporary” garters. One of those makeshift garters lasted 25 years; I lost the other on a November turkey hunt—I killed a fine jake in the midst of a violent thunderstorm that day.

Those buckskin leggin ties served my sometimes trader/sometimes fort hunter persona well. Early on, I tried a pair of inkle-woven, wool-yarn garters. They didn’t look or feel right in my estimation, and they didn’t hold up to the briars and brambles found in the North-Forty; I never considered “period correctness.” It took little to convince the historical me to return to using the temporary garters.

When I began to dabble with creating the returned native captive persona, I adapted existing clothing and accoutrements, including those buckskin leggins and thong garters. One morning in October the urge to chase wild turkeys hit. I donned my “hand-me downs,” and as I was tying one of the thong garters I got thinking about what John Tanner used for leggin garters. I could only come up with a reference to his leggins:

“My leggins were of cloth, and were torn in pieces in running through the brush.” (Tanner, 64)

James Smith’s narrative told of his adoption ceremony and the clothing he was given, which included fancy garters:

“They gave me a new ruffled shirt, which I put on, also a pair of leggins done off with ribbons and beads, likewise a pair of mockasons, and garters dressed with beads, Porcupine-quills, and redhair…” (Smith, 30)

In his book, Their Bearing is Noble and Proud, James F. O’Neil II presents a series of excerpts from period writings as they relate to the appearance of Native Americans from 1740 to 1815. O’Neil cites Smith (O’Neil II, v.1, 15) and others, such as John Knox, who describe garters by use: “…tied round under the knee…” (Ibid 19). The memoir of Pierre Pouchot reinforces Smith’s narrative, plus it offers a hint as to size:

“…they were garters of beads, or porcupine quills, bordered four fingers wide…” (Ibid, 21)

Like horn straps, there are many period-correct possibilities for leggin garters, including simple strips of buckskin. Finger-woven garters of varying sizes and degrees of decoration are common, along with ornate quilled or beaded garters. No one deems plain garters worthy of mention, it seems. In the end, the choice is driven by a persona’s station in life, time period and geographical location—the “who, when and where” of living history.

As I researched, I kept coming back to a single surviving garter collected by Major Andrew Foster. Foster was a British officer assigned to Fort Miami and Fort Michilimackinac in the first half of the 1790s. Many of his artifacts are housed in the National Museum of the American Indian, including two other pairs of garters. To me, the Foster artifacts are significant, because they represent the material culture that might have surrounded a native captive, adopted and raised in the Lower Great Lakes region in the last quarter of the 18th century.

The museum catalog gives no dimensions for the single garter (catalog no. 24/2008), but the garter fits both Smith’s and Pouchot’s description. There is a six row panel of quillwork attached to deerskin with light blue beads added to the stitching. A number of red-dyed, deer-hair brass cones hang from the garter’s lower edge, some quill-wrapped. The garter’s ends are adorned with assorted feathers and what appears to be a horse hair pendent.

Little did Major Foster know one of his garters would someday provide a glimmer of inspiration to a traditional woodsman. The historical me’s new garters needed to be utilitarian in nature, reflecting the Ojibwe cultural influence, yet suitable to hold up to the rigors of pursuing wild game in my 18th-century Eden. I hoped for a basic interpretation of a treasured artifact, a small part of a greater impression of life long ago. Regardless of how they turned out, I knew a set of leggin garters fashioned after originals would be a point of beginning, if only temporary.