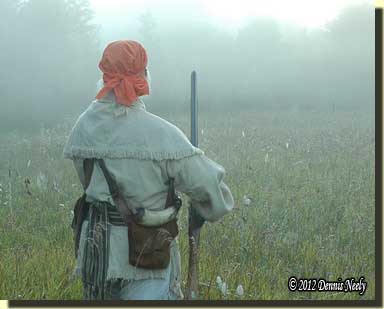 White-flowered Queen Anne’s lace dotted the prairie. Dew clung to hundreds of spider webs. A misty, boiling fog shrouded the near tree line as morning’s long shadows blanketed the small grassy opening. The August air smelled cool and damp, yet with a hint of sweetness. Sandhill cranes chortled to the south; over my left shoulder a lone male cardinal whit-sued beside one of the big swamp’s muddy fords.

The Northwest trade gun’s breech was barren; in 1794 it would have been charged and ready, awaiting only the crash of a sharp English flint. The purpose of that morning’s jaunt was a brief excursion into the Old Northwest Territory of long ago.

My buckskin-clad knees knelt in a patch of golden rod, barely budded and not yet yellow. A fox squirrel chattered on the far side of the swamp, sequestered somewhere high in a red oak. Sweat damped my headscarf. The linen hunting shirt’s soft weave tickled my sides, and I adjusted the leather-sheathed butcher knife tucked in the woven sash that held the shirt tight about my waist. Despite my best efforts, I could not overpower time’s shackles.

Easing back on my elk moccasins, I contemplated sitting a spell. Thoughts of life’s burdens filled my head, and I chose to press on in hopes that continuing the morning’s jaunt might aid my time travel. Dew soaked my hunt-stained leggins. Water splashed as my moccasins stalked across the tiny prairie following no set course other than reaching the cedar grove’s west boundary.

Halfway across the prairie, a spotted fawn appeared between two small cedar trees on the knoll to the north. It hadn’t noticed me, so I knelt again, grounding the trade gun and resting the cool barrel against my right shoulder. A second fawn stepped out, walked past the first and melted into the underbrush. The first fawn scampered after the second. As I stood and moved on, I realized the mystique of the Old Northwest Territory still eluded my pursuit.

At the grove’s edge, I leaned against a cherry sapling and alternated glances from my back trail to the dark recesses of the tight-packed cedars. As I cradled the smoothbore a wild turkey’s gray head popped up, not far from the two maples that grow in the midst of the red cedar trees. I squinted. The hen’s head stretched tall as she eyed the ground about her. She did not seem alarmed, and I wondered if she had spotted my headscarf’s orange color through the leaves.

One by one six or seven half-grown poults passed behind the hen. Acting more like adults than chicks, it seemed obvious that their “scurrying days” were at an end, a sure sign fall was not too distant. Controlling my breathing, I stood motionless and watched as the poults pecked and scratched along the trail and out of sight. In a few minutes the hen retreated; I settled to the ground and eased my back against the cherry’s rough bark.

Thoughts of work and family and unexpected responsibilities thwarted my best attempts to return to my 18th-century playground. I had traveled maybe two hundred paces and spent thirty of life’s precious minutes. The fog, Sandhills, squirrels, dewy cobwebs, fawns and wild turkeys set a magnificent 18th-century stage, yet I failed to open time’s portal, to trod upon the bridge between centuries. Sometimes the 21st century exacts a frustrating toll.

The Untold Story of Measured Compromise

On the one hand, mid-summer is the “off season” for traditional black powder hunting, and on the other, a pleasant summer’s morning offers a prime opportunity to venture afield and engage in a trek or scout based on one’s chosen time period.

As I noted in the story, Old Turkey Feathers remained unloaded for this adventure. That is not to say that a traditional woodsman might wish to stop for a little marksmanship check, but I knew my before-work time travel was limited and the scout would be short. And traditional hunters must also comply with all game regulations, which in some states, limits carrying a loaded arm out of season.

From time to time I speak of “measured compromise” as a means to overcome the inevitable intrusions associated with 18th-century simulations set on a 21st-century stage. The essence of the principle is to nurture a mental attitude that weighs, or measures, the importance of each intrusion, then seeks a suitable solution, or compromise, that minimizes a situation’s impact on the historical integrity of the simulation. 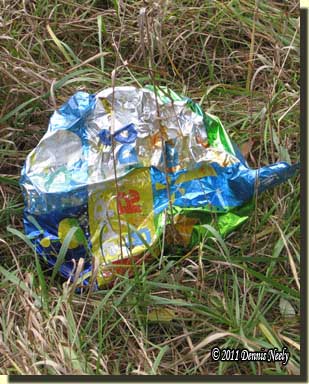 With practice, a crushed soda can or a deflated Mylar birthday balloon encountered in the heat of a traditional black powder hunting scenario become invisible to the living historian. They still physically exist beside the trail or tangled in a tree’s limbs, but they mentally do not exist in the historical reality of the Old Northwest Territory.

Most often, my comments or scribblings address the successes of applying measured compromise, but there are times when, no matter how hard a person tries, the attempt fails. That early-August morning is a case in point, and it demonstrates the importance the mind plays in each sojourn.

The intent of the outing was to start the day with that fresh, renewed vitality just a few minutes outdoors gives the soul, and I came away with that feeling. Rare is the morning or evening when a quick, ten-minute walk fails to charge my batteries for the tribulations daily life presents. But as always, one of the purposes of these scouts is to allow the mind to slip away to 1794, and even with my best effort, that didn’t happen.

And therein lays the untold story of measured compromise and the role the mind plays in shutting out all elements that don’t belong in a given historical simulation. It is the mind which must suspend disbelief and render the modern world’s markers invisible. It is the mind that must first believe time travel is possible. And it is the mind that ultimately recognizes the relationship between “what is” and “what was” and establishes that deep feeling of kinship between the living historian and the woodsmen of old. The mind is the gatekeeper for history’s portal. But, as it was on that August morn, the mind must be able to free itself of the perceived enormity of today’s responsibilities and demands, and when it cannot, thoughts of modern existence overpower those of 18th-century woodland life. In such circumstances time travel becomes impossible.

This phenomenon is nothing to be ashamed of; it is quite common among living historians and traditional black powder hunters. I share this story in hopes other traditional hunters might realize that all historical simulations are not successful and that time’s threshold is not always crossed. That does not mean a troubled soul cannot attain that comforting feeling of peace the outdoors offers. It only means it was not possible to travel back to one’s 18th-century Eden at that particular moment. Perhaps on the next outing…

5 Responses to The 21st-Century’s Exacting Toll