Plus or Minus Three-Tenths

Posted on May 16, 2013 by Dennis Neely: Traditional Woodsman

Few options remained. Daylight dwindled. Longer strides struck a balance between due care and a swift advance. With each footfall, the day’s tensions eased. The hasty still-hunt followed a well-used doe trail through a small stand of aromatic red cedar trees to the little knoll’s crest. December loomed a few days distant; as I recall, the year was 1792.

Fear of discovery, of running on to approaching deer, forced a pause. A leather-clad knee depressed the trail’s churned-up earth. A gentle, southwest breeze rustled the smaller cedar boughs as my eyes peered through a haze of dead branches, searching for legs, hooves and snouts. The air smelled cool and clean, but with a hint of far-off smoke.

A cautious descent found me standing a few paces from the last cedar at the big swamp’s east edge. Half crawling, I stalked the tree, eased back on my haunches and surveyed the swamp and opposite hillside. Satisfied, I shoved the blanket roll into a recess hacked in the tree’s lowest boughs, sat and pulled yellow grass up around me.

It wasn’t long before a doe and two yearlings ventured from the cedars on the far side of the swamp, about 60 yards away. The usual crossing trail at the south end of the watering hole was upwind, but the matriarch shied away, plodding instead to the downwind side of the pool. She started to cross, but jerked her head and looked into the cedars. The yearlings wandered about, but the older doe kept watch. With a flick of her tail, she turned around and ambled back into the cedar trees.

Two does and three younger deer came next. They milled about as if waiting for the day to ebb a bit more. Gray clouds obliged. One of the does stepped to the trail, but lingered, staring across the swamp. She sniffed the air, nuzzled the muddy path, then sniffed again.  She dropped her head and never raised it until she reached the east bank. The others followed single file. I estimated their closest distance at 30 paces.

Time weighed heavy. Darkness crept over the swamp. With but five minutes or so left, I glimpsed a foreleg. I saw a hind leg move before I saw the buck’s head. I knew he was the one I had jousted with for two years. I saw his tracks now and again, but despite hard hunting, I hadn’t seen him all season. He was almost 100-percent nocturnal.

Even in the failing light, the buck’s long, thick tines were unmistakable. To my dismay, he walked to the next trail south of the one the does used, which angled away from where I sat. When he looked away, I pulled my left leg up, shouldered the flintlock smoothbore and pressed my left elbow into my knee for a steady sitting shot. The moment of truth was at hand. “A clean kill, or a clean miss. Your will, O Lord,” I whispered to myself.

The buck stood at least ten paces beyond the trade gun’s optimum effective distance, and with a minute or so of light left, I pondered my choices. He dropped his head and sniffed the ground, offering a clear broadside shot. I had confidence in the death sphere, the steadiness of the rest and my own ability. My arteries throbbed and with each pulse the light grew dimmer and dimmer. The turtle sight held fast to a rumpled tuft of hair over his lungs, but doubt pricked my subconscious thoughts. The English flint never fell.

As darkness fell, the buck turned north. At the hoped-for-crossing-point, he sniffed the ground, first the does’ back trail, then where they entered the swamp. He chose to cross and I chose to sit and watch and learn…

Confidence in the Death Sphere

Lessons abound in the wilderness classroom. Some days we gain valuable 18th-century knowledge, and at other times we do not perceive the significance or relevance. On that late November evening, I had less than an hour to hunt. It takes but a few minutes to stalk the cedar tree by the watering hole, and at dusk the wind is usually favorable, unless a deer passes to the north. 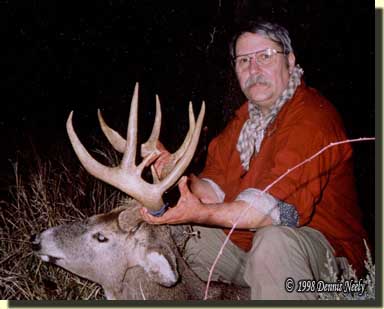 A few days later, that buck succumbed to “Old Turkey Feathers’” fire and thunder; the circumstances were almost identical, other than the distance. But, as with so many of my wilderness stories, the most memorable lessons learned come a day or week or month prior to the actual taking of an animal or fowl.

Normally I use that evening story to point out the importance of living within a pre-determined effective distance, but I thought of that night as I started weighing some lead balls, cast a few days earlier. What came to mind was the “I had confidence in the death sphere” statement and how some classroom sessions don’t take place in the forest or fen.

One morning, a couple years after I began competing at the National Muzzle Loading Rifle Association’s Spring and Fall National Championship matches in Friendship, Indiana, I wandered along the main shooting line. Several pickups were backed up to the loading benches with their fiberglass caps left wide open. I couldn’t help but peak in.

The first had at least a dozen pint Mason jars, each about a third full of lead balls. A piece of duct tape on the top showed the size and what I eventually learned was a grain weight, measured to the tenth of a grain, written in felt pen. I saw similar containers in the next pickup. A simple question resulted in an unexpected lesson on casting and weighing round balls. I don’t remember the gentleman’s name for sure, but my mind suspects it was Clark Frasier—and who better to learn from.

The bench shooter’s message centered on maintaining consistency, and as a result of that conversation, I now follow a set process when producing my “trade gun bullets.” I begin with enough lead to complete the pouring session so the lead composition is the same for that batch. I inspect and adjust the mold before beginning and re-melt the first 25 or so balls until I am sure the steel mold is at working temperature. I prefer to tip the mold slightly to the ladle so the molten stream flows in the side of the sprue hole and allows the air to escape. At the end of the pouring cycle, I level the mold so a small puddle remains over the hole. I wait two or three seconds after that puddle solidifies, then two taps with a lead hammer cuts the sprue. The discarded lead drops to a cottonwood board, the mold opened and the ball gently plops onto several layers of old cotton cloth. I try hard to establish a rhythm to the movements.

After that shoot, I invested in a 500-grain balance scale. All enthused, I went about weighing the unused balls from Friendship and discovered a twenty-plus grain spread for a sphere that should weigh about 345 grains. That explained why one shot would hit high, the next low and the third somewhere in between. Second guessing set in as I recalled two close misses on a ten-pointer—that’s when I took a serious look at my pouring technique. 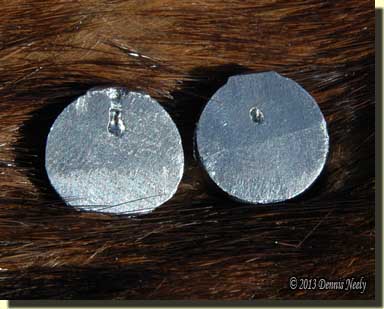 An air pocket does not have to be very big to cause a trade gun ball to shoot high, missing the intended point of impact.

With conscious care on my part, I finally ended up with a descent batch and divided them into three lots—“match grade,” “lights” and “heavies”—with an acceptable tolerance of six-tenths of a grain (+ or – three-tenths) per lot. Those that “missed the cut” end up back in the lead pot. I was later told lights usually have air bubbles; a chisel and mallet proved that to be true. No one seems to have a reasonable explanation for the heavies, other than not keeping the mold tight when casting or a speck of lead trapped between the halves. It may just be the way the distribution falls, too.

Over time, I learned each lead batch scales out a bit different so I use up one container before replenishing the stock. I now have an assortment of containers with duct tape labels. The heavies and lights are relegated to range practice sessions. There never seems to be too many heavies, so they are shot up quick, but that is not the case with the lights. In an attempt to avoid confusion, the leather ball bag in my shot pouch always carries match balls, and that is all I ever use for hunting.

Now weighing trade gun balls to + or – three-tenths of a grain doesn’t fit into 18th-century thinking; the practice is simply a positive side effect of modern competitive black powder shooting. In the English factories where trade gun balls came to life, I suspect there was an element of consistency born out of repetitive action.

The truth of the matter could only be found by weighing a sack of balls left over from one of the trading houses, and I have never seen mention of such a find. In Colonial Frontier Guns, T. M. Hamilton tested the standardization of trade gun balls from various 18th-century archeological sites. He charted 5,175 balls based on actual measurement, but unfortunately, he didn’t think to weigh these relics (Hamilton, 134). I wish he had, and I wish he would have taken a chisel and mallet to a few of the lights. That would be revealing, to say nothing of unnerving a curator or two…

When John Tanner plunked down a prime beaver pelt or two buck skins for 30 round balls, the thought of air bubbles hidden in those balls never entered his mind. But thanks to a bench shooter those thoughts swirl about my mind, from time to time. Filling a ball bag from a container marked “match” is not period correct, but when a fine buck steps out of the cedar trees I have confidence that the death sphere is the best that it can be. I feel I owe that to the game that walks before Old Turkey Feathers.