Stars sparkled in a moonless heaven. Wool-lined moccasins whisked through the fluffy snow. Years ago an ice storm tipped a good-sized cedar tree to the south, just shy of the ridge crest. I paused there to adjust the four-point scarlet blanket that draped over my left shoulder. The night air was calm, but cold. After all, it was late November, back in 1795.

The River Raisin, a few ridges to the west, was not yet frozen over. As I recall, snow squalls marked the week, along with a steady north wind. On that gorgeous morn, I wore the trade blanket more out of habit than necessity. 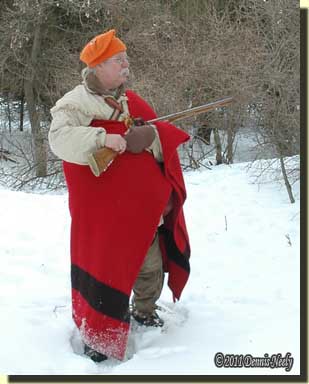 The trail bent east with a long sweeping turn. At the start of the bend, my buffalo-hide moccasins headed west in search of one particular oak tree. As I stalked through the last of the cedars, barren skeleton-like branches tugged and clawed at the blanket’s tails, but failed to hold a grip. One raked my right cheek; another slapped the back of my right hand.

In the graying darkness, I made out the oak’s familiar shape, just over the ridge and a bit down the steep west slope. A year had passed since I sat at that oak and I got it in my head that that was the morning to seek out my old friend. My left moccasin scuffed away the snow and stiff leaves from the trunk’s north side. The ground was not yet frozen, and for a brief moment the aroma of fresh-turned earth filled my nostrils.

I leaned the Northwest gun against the tree, pulled the blanket snug about my hips and sat cross-legged with my left shoulder pressed into a little hollow in the tree’s coarse bark. With the firelock resting across my legs, I checked the prime and arranged the red-wool folds over my hunt-stained leather leggins. I sat in solitude, waiting on first light.

Raspberry bushes grew on the hillside, too thick to walk through in some places. Halfway downhill a deer trail passed through the spiny, purple switches; another path followed the edge of the nasty thicket. The bucks like to chase the does back and forth along those two trails early in the morning after a fresh snowfall.

I sat a while before a wild turkey squeaked to the north—poorly forged hinges make a more tolerable sound. A coyote yipped off toward the river bottom, and in due time, the crows’ morning melee began. Other turkeys started popping, then clucked. After those birds flew down the first doe appeared, on the far side of the thicket. Two others materialized, and the three browsed in the direction of the isthmus, away from where I sat.

Fox squirrels dug in the snow. Two blue jays watched, but never uttered a peep. Upwind of the oak, a small, button buck meandered around the thicket’s corner, acting like he wasn’t sure if he should go uphill or head into the tangle. He lingered for a good thirty minutes before choosing the former.

Mid-morning a brilliant sun broke over the ridge crest. Still wrapped in the blanket, I grew too warm with the heat on my back. Nothing ventured by after the button buck, so I arose, descended the slope and spent the rest of a glorious 18th-century morning still-hunting around the thicket and the huckleberry swamp. 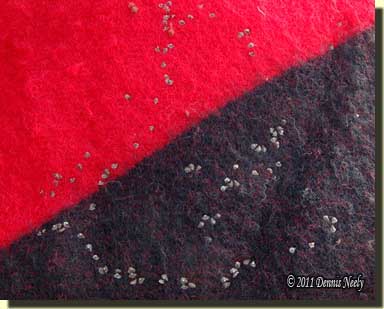 A few days ago I saw an advertisement for a “museum quality” blanket, hand-woven by a well-respected weaver. I could only assume the current owner was attempting to add value to the asking price when he or she noted the blanket had “…never been outdoors!” All I could think about was the “sticktights” (a local catch-all name for plant seeds that stick to anything) in the scarlet blanket, and how I wished that blanket showed more wear and tear than it does. I am proud to say I cannot claim it has never been outdoors.

From there, the discussion often goes to the somewhat universal use of wool blankets by 18th-century backwoodsmen from the various eras or with differing social standings. Substantial documentation exists for the issuing of blankets, but I often refer to T. C. Wright’s statements regarding the practices of Josiah Hunt, one of my hunter heroes. In his written affidavit, Wright told of the necessity of having a fire to keep from freezing in the coldest months:

Wright went on to tell how Hunt dug a small hole with his tomahawk, kindled white oak bark from a dead tree and buried the “coal pit” with dirt, leaving two air holes to control the smokeless combustion of the glowing embers. Hunt spread bark and brush to keep off the cold ground, then:

“…he sat down with the ‘coal pit,’ between his legs, enveloped himself in his blanket, and slept cat-dozes in an upright position… (Ibid)

Josiah Hunt depended on a blanket for his wilderness survival as he made daily forays into the forest to supply game for the officers of General Anthony Wayne’s Legion. Unfortunately there is no explicit description of his blanket. But that reference, coupled with several others from the Lower Great Lakes in the 1790s, forms the basis for hunting while wrapped in a wool trade blanket. I suppose instead of quoting the practices of a contemporary cartoon character I should change my response to: “If it was good enough for Josiah Hunt, it’s good enough for me.”

I’ve used the same four-point scarlet trade blanket for at least six years. I have a lighter weight blanket that I use in the fall, because the heft of the four-point blanket causes me to sweat too much when the temperature is above 25 degrees. According to Wright,

If I ever thought of selling my scarlet four-point, the sticktights would surely undermine any claims of delicate use or a museum curator’s level of quality care. The prickly little beasties ornament the lower edges of the trade blanket, especially in the area of the wide black stripe. I slept next to a campfire two falls ago while on a traditional black powder hunt near Mio, Michigan, and one of my hunting companions was horrified at all the debris imbedded in the blanket’s thick nap. He expressed a somewhat common concern when it comes to my favorite blanket: “It must be awfully uncomfortable and scratchy?” To the contrary, the sticktights are the price of firsthand, real-life lessons in the wilderness classroom.

In the last five or six years, similar statements like that of “…never been outdoors” have come to be the accepted norm. I don’t mean any disrespect, but to me, such phrases sound a lot like the classic used car salesman’s claim: “only driven to church on Sunday by a little old lady from Pasadena.”

I understand the motivation behind the statement, but it befuddles me as to why anyone would tout that an accoutrement has never been to rendezvous, a re-enactment, or some other living history venue. And yet, in the hobby those words hold greater sway than stating that an object is well-worn?

One of my favorites is “never fired a round ball.” For me, those types of statements elicit specific recollections, like inspecting Ted Jayson’s .32 caliber southern mountain rifle, the one he affectionately calls “Ugly Betty.” 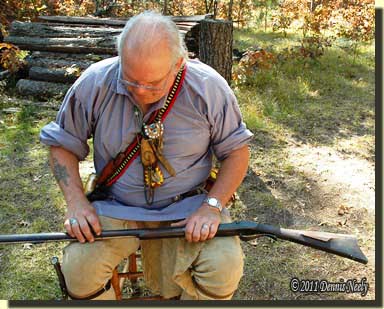 “She’s a tack driver,” he said during an impromptu show-and-tell session at the same traditional hunting camp. “I didn’t give much for it. It’s got rasp marks. It’s real rough, but I’m not going to jinx her. She’s percussion with about a 915-pound trigger pull. No butt plate. An antler nose cap and heel plate. A filed steel toe plate.  A 42-inch Green Mountain barrel. A simple walnut stocked southern style gun. It’s a perfect tool. I didn’t shoot that squirrel, Ugly Betty did.”

Traditional hunting is not a spectator sport. I have to constantly remind myself that living the 18th-century lifestyle is not for everyone. It is not easy, but the rewards are tremendous and the fun is unmatched. To say the least, you can’t do it on the couch or in front of a computer screen—you have to be an active participant. Like my clothing, accoutrements and blanket, you won’t see “never been outdoors” etched on my headstone.

Live the 18th-century life, be safe and may God bless you.