A Dose of Reality

Distant crows hollered and screamed. Geese ke-honked near the River Raisin. A single stinging nettle stem snapped under a damp buckskin moccasin. A dozen footfalls away, the grayed branches of two different cedar trees, each half-submerged in the pond’s clear water, beckoned. 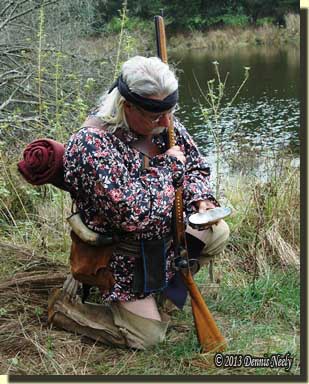 An unseen mint plant, crushed in the midst of stalking the dead cedars, perfumed the air. A trade gun’s length from the cut bank a clam shell lay in the matted grass, discarded by a hungry raccoon. I knelt, examined the pearly-white dish and considered taking it along. I chose to leave the shell in 1798.

A dew-laden cedar bough, green with fresh, summer’s growth, brushed the sleeve of my new ruffled shirt. Water droplets streaked the forearm and darkened the fabric’s print. The black mucky soil beneath my moccasins felt spongy, soft and soothing. Yet, a step or two farther, a jagged root sent a sharp pain shooting up my right leg.

In due course, I eased the blanket roll from my shoulders and settled back against a thigh-sized box elder, bent horizontal by some disaster. I cradled “Old Turkey Feathers,” my Northwest trade gun, in my arms and watched for ducks winging low over the swamp grasses. A hefty charge of bismuth bees waited impatiently in the smoothbore’s breech.

Despite a warm, rising sun shivers washed up and down my spine with increasing regularity. Dew soaked through my buckskin moccasins, chilling my toes. The bottom hands-width of each leather leggin was wet, and my ankles grew cold. To add to my growing misery, now and then a lingering gust of pre-dawn briskness cut through both shirts.

“Ke-honk, honk, honk…” The calls of a single goose echoed off the islands in the big swamp. The honking came closer. I stepped to the right and damped my knees with the moisture that surrounded a lush sedge grass clump. The yellowing blades stood chest high; the blade tips touched the lower branches of a modest cedar tree.

In a few seconds, two geese broke over the cedars that cover the ridge. The lead goose ke-honked twice; the trailing bird remained silent. As they passed over the swamp’s center, the back bird bent its head down and took a quick look at the pond. I squinted in anticipation. The trailing goose altered a few wing beats, but the first goose held steady. The fowls were gone as quick as they arrived.

From experience, I thought it best to remain hidden in the grass. The telltale look displayed casual interest in the little pond’s solitude. I allowed ample time for the geese to view the potholes to the south, swing west to the mill pond and return, but they never did. As my legs grew stiff, my new alter ego and the old historical me spent some time getting acquainted. The ensuing discussion continued on the long walk back to camp and lasted well into the night. On that pleasant October morn, the harsh reality of a native captive began to set in.

One Lesson at a Time

There is, perhaps, no colder time during the day than the interlude between night and the breaking of the sun’s warming rays over the eastern horizon. Some mornings, the seconds tick by with excruciating slowness, especially when cold is pressing hard on a body shared with an historical personification. Yet, after all, is it not the combination of the living historian’s physical, mental and emotional circumstance that sets the stage for experiencing a true and meaningful kinship with our hunter heroes from long ago?

The creation of any new persona brings great joy and a tremendous surge of anticipation, along with a good measure of trepidation and a healthy dose of frustration. Thirty-plus years ago, I experienced similar exhilarations and misgivings, and I guess I have forgotten much of that. Time does that, buffs off the rough edges and leaves only the gem shining through, or so it is supposed to be.

Hidden in the captive narratives are tiny snippets that deal with the hardships of trying to survive in a wilderness society. John Tanner’s journal discusses the realities of starvation and cold. One of his many stories deals with a man found sitting next to a salt creek:

“…we saw a man sitting…we found him stiffened by the cold, and when we took our hands off him, he tumbled to the ground…” (Tanner, 80)

That duck hunt, set in the Old Northwest Territory of 1798, was not a first-time outing for my new alter ego, but it was the initial “cooler weather” sojourn. Trying to live within the confines of the clothing and accoutrements outlined in the sketchy journal passages is difficult, but that is the lot traditional black powder hunters choose.

With the old persona, a hunter providing meat for a small, North West Company trading post, I had years to perfect period-correct cold-weather garb. At the outdoor shows, we are often asked “How do you hunt in the cold?” In response, I flip through the photo albums and tap my finger on one particular image. “It was eleven-degrees below zero when that picture was taken, on a bobcat hunt near Lewiston, Michigan,” I say with pride. I suppose it is bragging a bit when I tell of a modern hunter who bought state-of-the-art hunting boots, guaranteed to 40-degrees below zero, and how he asked me why I wasn’t cold wearing moccasins as he hopped from foot to foot, trying to warm his feet. 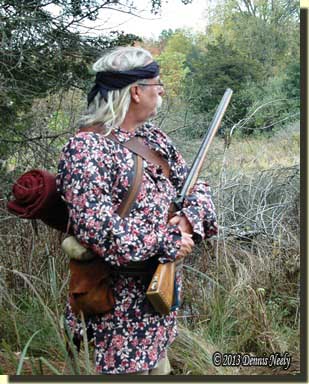 I am finding that starting over presents a unique set of challenges, but I expected that. To be honest, the personal tests of my own ability to research and then live out what I find is a huge part of why I looked forward to developing a captive persona. With any luck, the process will take years and afford countless hours of learning in the wilderness classroom.  And I knew adapting to cold weather would be the first hurdle, given the limited amount of clothing documentation Tanner offers.

At one point, Tanner tells of a trader named “Mr. Wells” who would not give the white-captive-turned-Native-hunter credit. Tanner offered eight silver beaver ornaments in payment for a capote, equal in value to “twice the price that was commonly given for a capote…”

“He took up the ornaments, threw them in my face, and told me never to come inside of his house again. The cold weather of the winter had not yet set in, and I went immediately to my hunting ground, killed a number of moose, and set my wife to make the skins into such garments as were best adapted to the winter season, and which I now saw we should be compelled to substitute for the blankets and wollen [sic] clothes we had been accustomed to receive from the traders.” (Ibid, 172-173)

Making a capote is in my future; hunting ducks or turkeys wrapped in a crimson trade blanket is not. But keeping warm as Michigan’s temperatures follow their inevitable downward curve is my immediate concern. Tanner never mentions wearing a match coat, only blankets and capotes.

The October duck hunt taught me that leather leggins have to give way to wool and two trade shirts are just not warm enough. For now, I’m content with learning to live with wearing a wool breech clout. A silk head scarf, worn turban fashion, is more comfortable than I expected, and I have already purchased a piece of hunter orange wool to make an Ojibwa-style hood or cap. And Tanner’s reference to “wollen clothes” has me rethinking a wool trade shirt, but more research is needed on that point.

Fortunately, John Tanner’s narrative is not the only one I am relying on. As I told my new-found friend on the walk out, the returned captive and the trader’s hunter had a long conversation. And in the midst of that exchange, the North West post’s hunter cited a vivid passage in Jonathan Alder’s journal:

“…The weather had been changing all day and by this time it had turned very cold…We started back to camp and hadn’t gone far until Big Turtle killed a turkey…he noticed that I was getting very cold, so he gave me the turkey and told me to run, thinking to warm me up in that way. Presently, we struck the prairie and the difference in temperature was so great that even if I had stripped off half my clothes in the time, I could not have felt the cold more intensely. We hadn’t gone more than half a mile until I began to get very numb…

“Freezing, like drowning, is not such a very hard death. I had been getting very cold for sometime, then my limbs began to get still and very much benumbed before I began to fall in the snow. I was getting quite sleepy and if I had been alone and saw some place to have laid down, I should have done so and slept my last on that day on the Sandusky Plains…” (Alder, 67-68)

Days like those described by Jonathan Alder are a ways off, I hope. In the meantime there are lessons to learn in the wilderness classroom. And with that, I’m off to the woods for another dose of reality…

2 Responses to A Dose of Reality