A wild apple thumped the ground. A blue jay perched, a few cedar trees distant, but kept its tongue. Somewhere down by the big cottonwood a fox squirrel chattered. A gentle breeze swayed the tree tops and brought the first aromas of fall. It was a pleasant September morn, in the Year of our Lord, 1795.

Geese ke-honked over the River Raisin, winging south to north, or so it sounded. Another apple fell, bouncing twice. The blue jay flew off. With a loud ruckus, Sandhill cranes protested some transgression, off by the meadow. In a dozen minutes the third half-red fruit hit and rolled in a lazy circle. The abundant bounty, spawned by heavy spring rains and moderate temperatures, added a sound to the glade not heard in many years.

After a short pause, I scrambled to my feet and still-hunted along the doe trail that stayed uphill of the last place where I heard the fox squirrel bark. “Old Turkey Feathers” held no charge, for that morning’s wilderness lesson centered not on taking game, but rather on breaking in the assembled accoutrements of my returned-captive persona.

A short ways down the trail, my alter ego leaned against a lightning-scarred cherry tree. I checked my back trail out of habit, and there, on the lower path, just past the cottonwood’s drip line, stood a young whitetail. The small deer showed little concern, and looked as if it had just gotten up from its bed. Perhaps it heard the apples thump, too.

Many years ago, when the wild apple trees produced an abundance of soft, sweet fruits, I took great pleasure in watching the whitetails change their normal paths so they could browse beneath those trees. I wondered if this deer might do the same.

In a minute or so, the young doe followed its ancestors’ habit and veered off the trail. After a short jaunt, it sniffed two apples, then picked up a smaller fruit in its mouth. The “crunch, crunch, crunch” sounded just as I remembered. It picked up a second apple. My mouth watered as it crunched away.

A number of years ago, a French woods-runner from the 1750s and I shared an oak tree. We sat back to back, and because of the tree’s girth, we had to turn half around if we wished to see each other. The morning was similar to my sojourn back to September of 1795. Even though our time travels were a generation apart, we shared the 18th-century through hushed whispers.

The black squirrels showed no inkling to participate in our historical simulation, and as the morning turned warm, my woodland companion grew impatient. I heard him rummage through his rather spacious hunting pouch. “Are you hungry?” he asked.

“No thank you,” I said. “I have an apple in my shot bag and a few walnut meats in my weskit.”

“I brought jerk. I’ve got Southwest Mesquite and Texas-style barbeque.” As the Frenchman elaborated, I heard the horrific, gut-wrenching sound of our time machine crashing into that big, spreading oak.

A couple weekends ago, at the Woods-N-Water News Outdoor Weekend West, held at the Kalamazoo County Expo Center, a guest asked me what I took along to eat when I was on one of my traditional hunts.  My answer was the same as it always is: “Some walnut meats and maybe an apple. I prefer to hunt hungry.”

Now, my version of “hungry” and John Tanner’s version are worlds apart. I pray that I will never truly know the deprivation he experienced. When I can plan ahead for a journey back to my beloved 1790s, I eat light or not at all. But going without food for a day was commonplace to Tanner, as it was for the vast majority of my hunter heroes:

“Only Oon-di-no, the man who had remained with me before, wished to stay, that his women might dry the skin of the last moose he had killed, so that they might carry it with them to be eaten in case of the failure of all other supplies.” (Tanner, 224)

As I explained to the show guest, when my stomach growls, I find my senses a bit keener and my desire not to mess up a stalk more compelling. I move slower than most woodsmen and exert myself less, which I suppose translates into burning fewer calories. For me, carving up an apple or munching on five or six walnuts is a treat.

A Smorgasbord of 18th-Century Food Ways

The conversation with the inquisitive guest, coupled with the local bumper crop of apples and nuts tweaked my curiosity. As I plunge headlong into a new persona, I thought it best to take a beginning look at the cross-cultural food ways of Native captives.

One evening I pulled out John Tanner’s journal and that of Jonathan Alder. I started a grocery list of sorts, writing down the foods those two encountered in daily life. I found referencing each entry cumbersome and counterproductive, with a few exceptions, but I also discovered a great similarity between the foods they list and those of a common fort hunter. 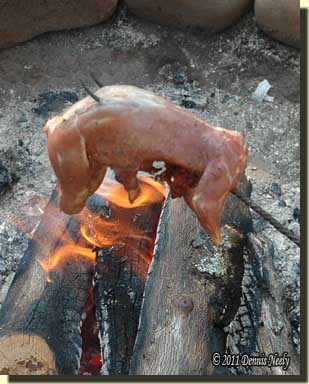 With a little thought, I expect most living historians would come up with the basics: wild turkeys, ducks, geese, deer, bear, elk, and sometimes moose. In the Great Lakes region, buffalo might not make that list; rabbits, white fish and trout would—sturgeon, cranes, swans and turtles might not, but all made it into the two narratives.

“When I arrived, I accounted for my whole outfit; having the peltries I had purchased in exchange for every article, except some powder and shot which we had ourselves expended in hunting. The price of this was deducted from my pay in my final settlement with the agent of the American Fur Company. Then ten dollars as the price of the dog we had killed in the extremity of our hunger, and which had been the means of saving, not my life only, but that of the nine Frenchmen that were with me.” (Ibid, 263)

Jonathan Alder details the process for jerking and drying buffalo, which mirrors that of so many other 17th- and 18th-century observers. He goes on to note:

“Jerk is ready to eat and very handy, especially on a march. An Indian with very little trouble can pack enough of it on his back to last two weeks when he is on the trail. And if you stew it in a little vessel with bear’s oil, it is delicious eating.” (Alder, 38-39)

Alder doesn’t mention adding “Southwest Mesquite and Texas-style barbeque” flavoring—the simple remedy for this oversight is to stop speaking after “I brought jerk.” He does, however, address the lack of bread on a number of occasions:

“We stayed here [up Big Darby Creek] several weeks hunting and feasting on the fat of the land, which consisted of venison and deer meat without bread.” (Ibid, 40)

“Their manner of living was so different from what I was used to and their food didn’t agree with me. Most of their diet was meat. Occasionally, they would have hominy and beans, but bread was a thing I hardly ever saw. Salt was an article scarcely used in their victuals.” (Ibid, 50)

Despite this lengthy grocery list, I have no desire to change my austere trail food choices. That is not to say I will not partake of wild game at a traditional hunting camp, only that I won’t be stuffing pumpkins, sturgeon or a chunk of dried moose hide in my bedroll anytime soon.

Give your 18th-century food ways some thought, be safe and may God bless you.