A gentle north wind bit bare skin. Downhill the same contrary wind blew waves of light snow from south to north over the thin gray ice that covered the watering hole. Buffalo hide moccasins trudged on; the evening’s anticipated ambush was no longer viable. Such were the circumstances of that cold November afternoon in 1795. 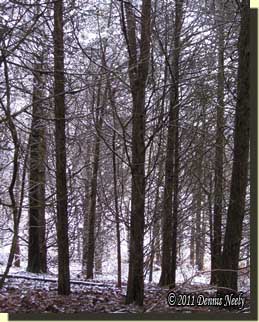 Up over the rise, the still-hunt veered east as I sought respite beneath an aromatic red cedar tree draped with wrist-thick grape vines. Like a wandering fawn, my course curled and wound around a dozen bushy cedars. I pulled the trade blanket’s folds snug about my cheeks. Falling snow melted on my nose and caught on my eyelashes as the favored tree came into view. To my delight, the north wind held true at this humble fort.

Settling in amongst the vines demanded patience. Years before the belt ax George Ainslie forged judiciously trimmed suckers from the half dozen vines that hung from the old tree’s crown and the dead branches on the cedar’s lower trunk. Hunched over, I pulled the blanket’s folds tight about my legs, then sat back cross-legged with the Northwest gun’s muzzle pointed downhill.

A deer trail angled down the hill, upwind of the old cedar on that particular evening. I nudged the scarlet blanket’s folds around my ears and against my cheek bones. My breath fogged my silver-rimmed spectacles. I exhaled through my mouth, forcing my body’s inner warmth against my chest. The tree’s keg size trunk blocked the north wind. I sat quiet and contented.

As the sky grayed, a lone turkey clucked in the distance. I never heard its big wings flap on its way to the night roost. A bit later a fox squirrel spiraled down a skinny cedar, forty paces down the slope, a few trees from the swamp’s edge. Wispy boughs bounded; snow flicked in the air. The fluky wind current pushed the white showers south to north, which I felt worked to my advantage. Any deer on that trail would crest the ridge with the wind at its rump, but before it arrived at the swamp trail the wind would be nose-on, or so I reasoned.

Along towards dark a single doe plodded on the trail. When it reached a clump of cedars with tops broken down by winter ice some years before, it stopped and sniffed the air. It waved its ears and dashed its tail about. At one point it offered a longing look uphill, the kind of look that makes a hunter dream of a trailing buck.

Light grew dimmer before the doe ventured to the swamp trail. The solitary whitetail ambled on with a painstaking deliberateness, burning up the rest of that day’s light. I sat until I was sure the young doe was gone, then got to my feet, bent over and exited the old cedar’s sanctuary.

Subzero cold and waist-deep snowdrifts delayed my early January hunts. I’m not happy about that, but there’s not much I can do. With the old persona, that of a hunter for a small trading post on the River Raisin, I can tolerate mercury that hangs around zero—on two occasions I’ve hunter bobcats at 10 degrees below. But my attention right now is on the new persona, an adopted native captive who returned to white society.

By that late November evening, it seemed obvious winter would come early and be harsh when it arrived. Unfortunately my weather instincts proved correct. I pushed the physical limitations of the captive persona through the end of Michigan’s muzzleloading deer season in late December, but temperatures below fifteen degrees proved unproductive for meaningful wilderness learning. 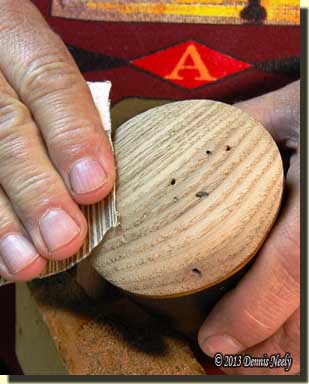 There hasn’t been much spare time so far this year, but I have managed to work on a few projects to move the new persona along: a revamped bison powder horn, leggin garters, a split pouch, a new horn strap and a heavy linen trade shirt. In response to a number of requests, I have documented each project with photographs and I hope to post step-by-step instructions in the “How-to” section of this web site.

With that in mind, I started updating the hand sewing pages and I posted the first revisions today. The second half to the hand sewing how-to is written and deals with the stitches themselves. Those pages are already in draft form, awaiting the accompanying photos. In the weeks ahead I hope to get caught up posting the results of the currently completed projects.

So please be patient. Improvements to the site are on their way. And as always, I enjoy hearing constructive feedback.

2 Responses to The Old Cedar’s Sanctuary