Over the Next Hill

Crystalline ice bowed trees and bent bushes. Huge white snowflakes floated in the calm. A fresh, fluffy white carpet erased a winter’s worth of life-stained snow. At the edge of the thicket, tawny prairie grass stood stiff, encased in the remnants of a freezing rain from a few nights before. The grassy ice-spires crackled and popped with each footfall of my buffalo-hide moccasins. This was Eden; this was the Old Northwest Territory of 1796. 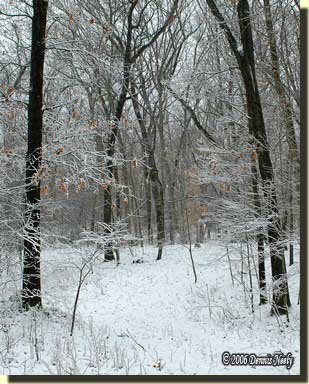 That morning’s course skirted a deep wash, tangled with stunted red cedar trees and box elders, broken and twisted by the natural progression of time. Here and there an odd-shaped hole marked a box elder’s gnarly roots. One of the dens had the new snow pushed back with a dirty-sand imprint of where a rabbit sat. Fresh tracks led to that hole, but the rabbit was gone. My stomach growled in a fit of angry frustration.

With Old Turkey Feathers cradled in my arms, I stood and visually back-tracked the rabbit. The familiar indentations curved in the direction of the raspberry patch at the gully’s mouth. My eyes scoured the snow around a big fallen cedar tree’s now gray and weathered skeleton. Three shadows suggested another bunny’s comings and goings. As I plotted a path down the steep bank, I whispered the hunter’s prayer, “A clean kill, or a clean miss. Your will O Lord.”

I knew the descent would prove treacherous. Even on the flatter ground, the fresh snow was slippery on the ice-crusted under layer. I chose the doe trail that hugged a box elder so I could support myself with a hand against the tree’s forked trunks. I took my time, placing each moccasin with care and testing the footing before committing my full weight.

Once in the bottom of the wash, I paused, then still-hunted to the fallen cedar. Matted grass draped over the cedar’s lower branches, turning the big tree into wilderness boarding house for creatures. The three shadows were just that, shadows. I circled the tree, pressing my left moccasin against a branch now and then, shaking snow, cracking branches. The boarding house was empty.

Again my stomach growled with a twisting convulsion. Out of curiosity I followed the holed-up cottontail’s tracks to the mouth of the gully—seeking out a lesson in the wilderness classroom. A dozen paces before the raspberry patch, the rabbit’s early-morning adventures lay mapped in the snow with crisscrossing romps to a multitude of cedar trees. The puzzle was not worth the time to unravel, for I knew that rabbit was gone.

Much to my surprise, that rabbit avoided the raspberry briars, circling it instead. There was not one track within the purple switches. All that remained to search was a patch of bent-over prairie grass large enough to hide three, maybe four small whitetail deer.

I almost bulled through the grass, but thought better of the situation and stopped to check the trade gun’s prime, to make sure it was still dry and ample. To be sure, the prairie grass held out little hope. I saw no tracks, but I had been fooled before. I was hungry and did not wish to return to camp empty-handed.

I approached the tiny haven slow, then paused. I looked left, then right, then stepped forward. Brown fur flashed from beneath my left buffalo-hide moccasin. The rabbit took three, long hard bounds to the left. The flintlock’s sear clicked. Another bound or so and the square, brass buttplate slammed to its rightful place. The turtle sight chased the rabbit’s flagging white tail as it darted behind a head-high cedar tree, silver with ice.

The Northwest gun’s muzzle belched a long, fiery, orange tongue. White, sulfurous smoke rolled through drifting snowflakes. Shards of black soil flew. Cream-colored wooden slivers somersaulted. A squirrel-sized slab of green-moss-covered bark dropped as the cottontail emerged unscathed from the right side of a thick, dead, box elder trunk. I watched as the rabbit zigged and zagged up the rise, then vanished in the tight-packed cedars that guarded the crest of the next hill.

This particular traditional pursuit occurred many years ago. I happened on this story while searching my journal for a specific turkey hunt. I had to chuckle, because I still remember the moss-covered piece of bark that fell straight down after the bunny cleared that box elder tree. That chunk dropped with the finality of a guillotine’s blade, albeit in slow motion. And like so often happens, to this day I do not remember seeing that box elder jump up in the bunny’s path.

Last fall I held out great hopes for grand adventures in the weeks after the end of Michigan’s deer seasons. When I started the fall hunts, my goal was to guide the new historical me—an older man, captured in his youth, adopted into an Ojibwe family, and who returns to his birth relatives, but cannot give up the Native ways—to a memorable “first meat” experience. I came close during fall turkey season. I tried for mallards and Canada geese, and did some squirrel hunting in early November, but opted to wait for a nice buck. That was not to be, either.

Winter at the North-Forty was similar to those of my youth—long, cold and harsh. In addition to deep snow and sub-zero temperatures, work, family and a bout with a lingering cough kept me out of my wilderness Paradise. To add insult to injury, a few days ago, I spotted three cottontail rabbits dancing about under a pine tree; it was pretty obvious their spring spawning run is on. I’ve seen fox squirrels chasing more than normal, too.

Although the primary emphasis of traditional black powder hunting is putting meat on the family dinner table, I don’t need a rabbit or squirrel dinner to survive the rest of the winter. This winter has been harsh on all of God’s creatures. I fully expect to find winter-killed game, and I’m not about to add to the grim total. Now is the time to allow the game to rebound, to replenish the forest. It is as it has been for centuries.

And that’s the beauty of traditional black powder hunting. I can enjoy a quick romp in the glade without having to kill anything—barring deep snow. I can still chase rabbits for a few weeks, but it is my choice whether or not I unleash the death bees.

In an odd twist of fate, the historical me has traveled full circle, and I am back anticipating taking a wild turkey as first meat. Most of our snow pack is still a foot deep, but I am looking ahead and thinking about wild turkeys. I feel the excitement growing. Dragging a few clucks on the wing-bone call that I keep on my desk might be cranking the anticipation up a bit, too.

I remember my stomach growling as I seated the wadding over the shot that morning. It was late February back then, too. I recall thinking the falling bark symbolized the end of the rabbit hunting for that year. But just because I missed, and just because the bark seemed like a slammed door, I did not stop the pursuit. I forged on that morning, circling to the north in hopes of heading off the rabbit for another go-round. And that is what we, as living historians, as traditional black powder hunters, do. We press on over the next hill…