Dawn broke with a clear sky. A quarter-inch of ice skimmed the surface of the prior day’s melt-off puddles. The overnight cold froze the rutted mud and left the calm air smelling clean and fresh, but not spring-like. A thin, white frost coated the brown, half-matted prairie grass, the apple tree’s buds and the red cedar trees’ burgundy-colored boughs. Anticipation filled our hearts.

The first drift looked like two bell-shaped mounds that sprawled over the wagon trail and spilled into the cut hayfield. The snow was dirty and dingy, speckled with smelt-shaped leaves and edged with dish-water-gray ice. A smattering of old deer tracks, melted into soft, almost indiscernible depressions, crisscrossed what remained of the once mighty drifts that stood eye-high to the east of the vine covered fence.

Around the bend, ice flowed across the road. Then down the hill, the tip of a yellow-sand wash filled the ruts where cascading water ran hard. At the next two rises, the crusty drifts were clearly too deep; our course veered right as the 4 by 4 passed over ankle-deep snow without leaving a mark. The usually soggy dip was frozen firm. In no time we made the gate, then turned north on dry prairie grass. Tami and I had looked forward to this drive for over two months.

Rough, gray ice covered the steep hill that leads to the grassy clearing west of the cedar grove. “That doesn’t look good,” Tami said. “Do you think we can make it back up?” she questioned as she glanced my way. 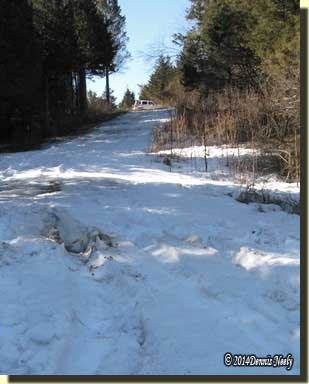 At the base of the hill, in the shadows of a tall stand of cedars, the snow seemed to follow the contour of the ground, and did not appear too deep. We made it down the hill, over the snow to the matted prairie grass and continued on our way. We were not so lucky on the return trip.

When we passed the first time, the snow beneath the tires broke up into round, slippery ice balls—the kind that act like greased ball bearings and afford no traction whatsoever. The truck’s momentum slowed. We made it halfway up the hill. I backed up and started a second run and that’s when the tires broke through. The snow on the crest of the rise was much deeper than I thought. The North-Forty claimed another victim…

Tami stayed with the warm truck, and I hiked out. The idea was to bring back Tami’s Jeep, pick her up and leave the truck in the woods until the snow melted some more—a couple of days, perhaps.

Like a kid with new boots in search of a worthy mud puddle, I took what Tam calls “the scenic route.” My course skirted the cedar grove, then cut across the wheat field that barely sprouted before the first, early freeze. I figured a guy might as well do some shed-antler hunting on the stroll home.

A third of the way across the field, I angled east to check a hillside and the trail that crossed it. I got thinking about the number of times the North-Forty has imperiled an iron horse or its many variations. I began to shake my head, more out of respect and awe for that plot of ground than in disgust.

Growing up, my dad often told how, in the early 1950s, one of the Holstein heifers broke through the fence and got mired in the sticky muck near the River Raisin’s bank. He and LeRoy, who worked the farm, hired Beal Trucking’s Caterpillar D4 dozer to pull the cow out, if I recall the story correctly. Well, the dozer went down, too. The custom-built winch on Beal’s big wrecker and a series of long cables saved the heifer and the D4, but not without a tremendous effort.

I can remember a number of times when LeRoy’s International “Super M” or his “560” got stuck, even with loaded tire, wheel weights and chains. In high school, when I really fell in love with the North-Forty, it seemed I was always getting some vehicle or tractor stuck—the white Chevy Corvair, especially. That car had no guts, but in hindsight, that is how I learned to respect the land.

In recent years, the power line subcontractors have taken the brunt of the North-Forty’s vengeance. A trimming crew lost a big Michigan loader outfitted with a Hydro-Ax mulching brush hog in the right of way that crosses the river. It took them two days of hard digging and winching to free the loader, but they were warned.

“This will take two days. We work in the UP,” the crew chief scoffed, “and we know all about wilderness.” When the crew left ten days later, the clear winner was the North-Forty. 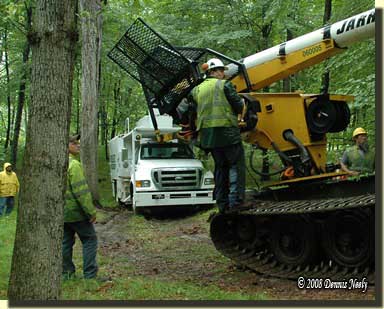 Even with 30-inch wide pads, the Jarraf track trimmer had a difficult time freeing a subcontractor’s mired boom truck.

A few years ago, a light morning shower turned the wagon trails greasy. That crew was warned to get on the high ground at the gate if it rained. They ignored the warning. A brand new boom truck came to rest firm against an unforgiving white oak tree. Instead of listening, that crew chief tried to force his will on the forest. Ten men, two track vehicles and three 4 by 4s later, the truck was free, but the road was deeply scarred.

On another occasion, the power company’s repair foreman called. A frayed cable needed immediate attention, he said. The weather was mild, but a heavy freeze and a wet snow loomed in the forecast for later that week. The foreman ignored my warning to get in and out before the snow. “We have it scheduled,” he said. “A little snow isn’t a problem for us.” That emergency cable repair claimed a 6 by 6 boom truck and two 4 by 4 pickups. It took two days to get them out.

When I reached the road, Scott was driving by in his John Deere 6140—a four-wheel drive, 145-horsepower tractor—hauling a load of round hay bales. We waved at each other, and by the time I reached the back door, I gave in and called his cellphone. He said he wondered if I had gotten stuck and almost called me. After he unhooked the trailer, he came back to pull the truck free. We took our time, respected the land and soon the pickup was safe on high ground.

The Meaning of “Wild”

On a number of occasions I have been taken to task for referring to the North-Forty as a “wilderness.” Most often, somewhere near the beginning of the chastisement, the critic cites a loose interpretation of the definition of wilderness as put forth in “The Wilderness Act of 1964:”

“A wilderness, in contrast with those areas where man and his own works dominated the landscape, is hereby recognized as an area where the earth and its community of life are untrammeled by man, where man himself is a visitor who does not remain.” (The Wilderness Act of 1964, Public Law 88-577 (16 U.S.C. 1131-1136), Sec. 2, (c))

In my experience, there is no winning in such an argument. But traditional black powder hunting is not about winning or losing, rather, it centers on reliving the past through simulating the historical circumstances of a chosen time period. In some respects, Joseph Doddridge suggests a plausible solution to guide living historians on this noble adventure when he suggests:

“Let the imagination of the reader pursue the track of the adventurer into this solitary wilderness…” (Doddridge, 22).

Now, if you have seen Mark Baker’s videos, “The Long Hunter Series,” you will no doubt recognize the rest of that quotation: “…Bending his course towards the setting sun, over undulating hills, under the shade of large forest trees…”

But getting back to defining “wilderness” from the traditional hunter’s perspective, it is the mind, one’s imagination as Doddridge puts it, that controls the suspension of reality and allows our version of time travel to exist. And further, it is the mind that determines what constitutes a close approximation of the living historian’s simulated environment to that of a hunter hero’s surroundings of long ago.

With modest care, a traditional hunter can choose a spot, take a seat, look about and never see one shred of evidence that ties that location to a specific point in time or location—not in the 21st century nor in the 18th century, for that matter. And most times, a short while after arriving, the glade returns to an unfettered state, a state where the presence of man is absent, save for the observer, and “the earth and its community of life are untrammeled…” 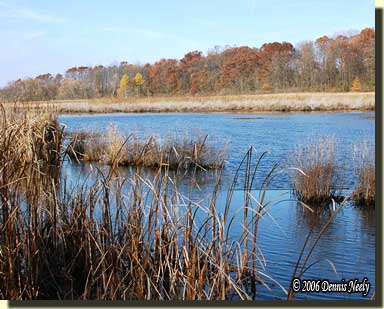 And if the circumstance parallels that described in an old woodsman’s forgotten words, is this not an 18th-century wilderness? Can a living historian not accomplish the same purpose on a humble plot of twenty acres? Or ten? Or maybe as little as five?

My contention is, and always has been that the stage upon which my 18th-century adventures play out are “wild,” and thus, “wilderness.” The North-Forty eats D4 Caterpillars, International 560 tractors, and 6-by-6 power-company boom trucks without so much as a belch or a stifled burp. Miring a “rugged Dodge Ram 4-by-4 pickup,” as the flashy commercials tout, is child’s play.

By the same token, this plot of land panics an unwary woodsman with thigh-deep quicksand or threatens hypothermia with an unexpected plunge into frigid, murky water. Unseen tangles and snares slam an interloper face down in oozing spring mud, raspberry switches cut and slash bare skin, and if a traditional woodsman dares misplace a buffalo-hide moccasin on a crisp snowy morn, the inevitable tumble and roll leaves a lasting wilderness lesson.

From the traditional hunter’s perspective, all such happenstances are unforgettable, historically correct mementos of journeys taken on the addictive quest to answer a single haunting question: “What was it really like to hunt, survive and live in the Old Northwest Territory?” Delving deeper, one unearths the unmistakable reality that the land can and does inflict indiscriminate hardship, pain and sometimes death on all the tenants of the forest, including a humble, 18th-century, wannabe woodsman. That has not changed over the ages, and it will not. Wilderness is in the eye of the beholder.

In hindsight, I find it interesting that the critics are often the same folks who embrace busing salmon, contraceptives for troublesome deer and inventorying spotted owls. In a twist of irony, when these well-meaning folks reached the outer limits of the habitat and discovered the spotted owls cross-breeding with barred owls, they did not change their opinions, instead they took credit and named the “newly discovered” hybrid species: “sparred owls.” But that doesn’t count as trammeling on the wilderness, now, does it? Or is it really wilderness?

Venture into your personal wilderness, be safe and may God bless you.