Posted on May 15, 2014 by Dennis Neely: Traditional Woodsman

A weak gobble drew hopeful glances. A dozen moccasin steps later, my wife thought she heard a second utterance; older ears failed to discern the joyous sound. Regardless, the tom was well off to the west; somewhere out in the sedge-grass marsh that kissed the River Raisin about at the sand flats.

We walked side by side, each keeping to an earthen rut of the wagon trail. Little clouds of dust rose with each footfall. The early morning sun beat down on our backs. The air was calm; the sky clear; the temperature almost too warm. Fresh turkey tracks in the yellow, sugary sand betrayed a bird’s presence within the last day.

Despite excited hearts, the still-hunt maintained a slow and cautious pace. Our course advanced up the hill and around the bend before slipping off into the cedar trees. Once off the wagon road, there was a greater possibility of walking on to a sneaking tom. With that in mind, Tami kept the “Silver Cross’” muzzle at the ready, pointed ahead, waist high.

We set up our ambush in a clump of tight-growing red cedar trees, just south of a little clearing at the edge of the hardwoods. Tami faced west and I east. Ten minutes passed before I dragged twice on the single wing-bone call; my hands muffled the seductive clucks. “Rustling in the leaves, just over the hill,” my wife whispered a few minutes later.

My right thumb pressed hard on the Northwest gun’s cock screw when I heard the noises. “A gray squirrel,” she whispered with a bit of disappointment in her tone. I glimpsed movement to my right, then saw a plump body with a thick, bushy tail bounding along, unconcerned, not three paces distant.

Switching to the two-piece wing-bone call, I barked out two sharp clucks, imitating those of “Old Lady Gray.” So many years ago, on that warm spring morning, the smoky-gray hen with an anti-hunter attitude marched from the cedar grove, crossed the grassy clearing and stomped up a rolling hill. She clucked twice, crisp and loud like the first two tones of a long yelp.

After a respectable pause, she turned to her right, moved uphill about ten paces and called again. There was a hint of urgency in those two notes, more demanding than seductive. She stood firm for the longest time, then walked south with her typical herky-jerk gait, ending about ten paces from where she stood for the first call. She turned to the far ridge and called twice in the same manner. In a few minutes she returned to the cedar grove.

“I’m going to the south, down back of the hill,” I said. When we fashioned this stand, we agreed on safe boundaries for shooting. “Your shooting area won’t change. I’ll be well behind you,” I assured my apprehensive turkey hunting partner.

A cautious still-hunt ensued; I stalked my next calling location as if it were a fine whitetail buck. Thirty or so paces to the southeast, I settled in against the trunk of a large cedar tree, over the hill and out of sight of my wife. Facing south, I clucked twice, mimicking Old Lady Gray. My eyes surveyed the understory to the east as my mind ticked off an approximation of the smoky-gray’s first pause.

Satisfied a wild turkey was not coming to my entreaties, I scrambled to my feet and circled to the north to another clump of cedars I had spotted while I waited. This time I stopped long enough to call, but I did not tarry, rather I pressed on to a large cedar that grew forty paces to the northeast of Tami’s lair. I sat with my back against the tree, then clucked twice. I dared not return to my original seat for fear of disrupting a silent tom advancing on Old Lady Gray’s student.

The first concern of any living history simulation, any traditional black powder hunt, is safety. There are times when we simply cannot duplicate the feats of 18th-century woodsmen, and for those situations, we must apply a healthy dose of “measured compromise,” in essence assessing the consequences of any given action and finding a compromise that neutralizes the unwanted consequences in a safe and legal manner. 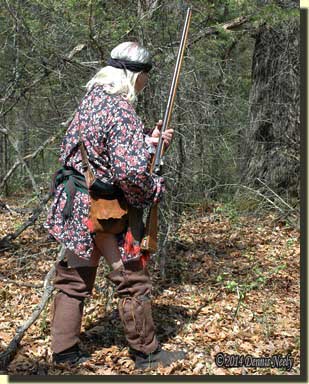 Moving about in the midst of a traditional turkey hunt is one of those situations which might create unsafe conditions. The only people who can properly address the safety risk of any circumstance are the people involved, and that also includes unseen hunters or trespassers who are not part of the re-enacting party.

In the case of that morning’s hunt, my wife and I agreed on “shooting lanes” right after we sat down. By sitting back to back, we minimized the safety issues of two hunters shooting from the same stand. On a positive note, any bird that tried to come in from behind Tami was covered, too.

But the hunt’s complexion changed once I got up and moved off to the southeast. By choosing the ambush location with great care, I was able to slip away and keep the crest of the hill between us—in the case of an accidental discharge both of us were safe. The only other concern would be a trespasser, and that risk was minimized (not removed, by any means), because the hunt occurred on private property. Again, I cannot emphasize enough that safety comes first; don’t move about if you might be in danger because of your movements.

Imitating a Tenant of the Forest

“One important pastime of our boys was that of imitating the noise of every bird and beast in the woods. This facility was not merely a pastime, but a very necessary part of education…The imitations of the gobbling and other sounds of wild turkeys often brought those keen eyed and ever watchful tenants of the forest within the reach of the rifle. The bleating of the fawn brought her dam to her death in the same way…” (Doddridge, 122)

The majority of the time I hunt alone. I relish those times when I can hunt with a partner, because it always seems to lend itself to expanding the historical significance of the outing.

When the calling at our ambush did not produce a response, I chose to “imitate” a tenant of the forest I had observed years before: Old Lady Gray. In so doing, I followed Doddridge’s tutelage, and in my opinion, applying such a technique showcases one of the subtle differences between 21st-century hunters and 18th-century woodsmen. Plus, a hidden message in the Doddridge passage is the implication that “our boys” had to observe nature in order to imitate it.

There is no question that hunting the wild turkey on the North-Forty has become more difficult over the last ten years. That increase in difficulty is brought on by modern hunters imitating what they see on the outdoor videos, which in many instances are meant to sell product. A half-hour segment that shows a hunter calling twice, waiting ten minutes, calling twice more, waiting ten minutes…isn’t going to sell many calls, to say nothing of keeping the viewer’s interest. It’s no wonder the birds are call shy.

As living historians, our delight is duplicating the exploits of a long-dead hunter hero. Given the abundance of today’s call-shy wild turkeys, the old ways also hold a possible key to success for those of us who are willing to observe and imitate. Nothing came of my strict adherence to Old Lady Gray’s ritual, other than my wife and I shared a magnificent morning in the forest. But not every outing produced a harrowing 18th-century adventure back then, either.

Yet, I believe patience, observation and careful imitation of the forest tenants will produce results, just as it did long ago. That is why I am proud to consider myself one of Old Lady Gray’s students…