At times, unsubstantiated rumors can cause more damage than the best-funded anti-gun campaigns.

Recently Tami and I spent a few days at the National Muzzle Loading Rifle Association’s National Spring Shoot. On Sunday evening, June 15th, 2014, emergency vehicle sirens approached the Walter Cline Range from the west. Rescue vehicles and police cars whizzed by and turned into the main entrance at the Friendship Flea Market, which is a private concern that has no affiliation with the NMLRA.

Moments later, two fire trucks from the Friendship Volunteer Fire Department, Inc. slowed down, entered the NMLRA grounds, passed the trap range and waited for instructions, not far from a back access drive to the flea market—and that is where I believe the confusion began.

You see, this past weekend we were told all about the “shooting at Friendship,” in great detail. I am not going to repeat the rumor as it was told to Tami and I for fear of perpetuating a falsehood that is damaging to the NMLRA’s safety record and reputation. Rather, I would like to follow a sage attorney’s advice from many years ago and testify to what I witnessed. And please keep in mind that my perspective is a bit biased as I served as a Deputy Fire Chief for almost ten years. 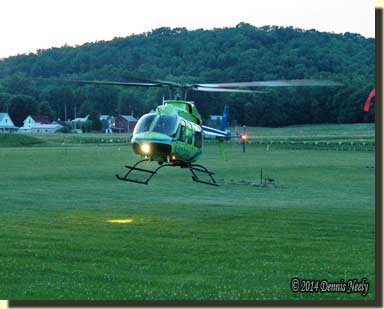 The report that I overheard on a security officer’s radio was that an individual had been accidentally shot somewhere on the flea market grounds and needed to be evacuated by StatFlight helicopter. Now in today’s world, fire departments pre-plan for possible emergency situations, and such preparedness was evident by the actions of both the FVFD and the staff at the NMLRA.

Within five minutes, three FVFD emergency vehicles approached the silhouette range, secured a flat, grassy area and prepared for the helicopter’s arrival. Not long after, the helicopter broke over the tree line beyond the Rand House, circled the grounds once and then set down slowly on the range. The medical staff exited the chopper and met the ambulance as it transported the patient to the temporary helipad. Then, after the medical staff stabilized the patient, the helicopter lifted off and he was on his way to the hospital.

On Tuesday, June 17th, the Osgood Journal correctly reported the incident on page 10:

“Police responded to an accidental gunshot injury at the Friendship campground Sunday. According to the Ripley County Sheriff’s Office, Darrin Brown, 36, Sunman, was taken by air care to UC Hospital for an accidental self-inflicted gunshot wound at 8:17 p.m.

“The injury from the 9 millimeter handgun was to the inner thigh, and police said he did not have life threatening injuries. Brown was camping in the large campground by the flea market.”

The National Muzzle Loading Rifle Association and its members work hard to promote safe practices in all venues of this great pastime. Beyond that, the NMLRA is dedicated to providing a safe environment for their guests while at the Walter Cline Range and obviously willing to offer their facilities and manpower to help their neighbors, as well. Mr. Brown received the same prompt, professional medical attention one might expect in any metropolitan area in America, perhaps better.

Before I step off my soapbox I would like to point out that, as traditional hunters and black powder shooting sports enthusiasts, each and every one of us needs to make sure we have the facts straight before we repeat them. In this case, the erroneous information plays right into the hands of the gun-control crowd. So if in your travels someone shares a wild story about the “shooting at Friendship” that does not match the facts reported by the Osgood Journal, please step forward, speak up and set the record straight.

Be safe and may God bless you.

This entry was posted in Worth thinking about.... Bookmark the permalink.