Snowflakes cling to the trade blanket’s crimson nap. The woolen shell is more white than red. The black stripe is a pale gray, a nothingness hue that matches the firmament. The Northwest gun’s lock nestles against my right elbow, tucked safe under the blanket’s folds. Now and again an icy crystal bites a cheek or the side of my nose or wends its way behind my spectacles and stings an eye. Yet here I sit, cross-legged, huddled in a folded trade blanket, enduring joyous discomfort deep in the Old Northwest Territory.

Wedge after wedge of geese ke-honk overhead, winging northward. Before me the reed grasses sway, maybe forty-paces distant, at the edge of the River Raisin’s bottomlands. Behind me a tree pops from the late-December cold. Goose music fills the empty glade, orchestrated by who knows how many geese loafing upon the Raisin’s frigid waters. “Twenty-four, twenty-five, twenty-six,” I count with a frosty whisper as they glide above, tree-top high.

To the left, a dead white ash leans with the fibrous remnants of its bark hanging, twirling, rocking side-to-side in the wind. I jump at the loud bang of a popping tree, beyond, by the old yellow birch. More geese set their wings; this flock is silent. I have not glimpsed a deer in three days. New-fallen snow fills any tracks I happen upon. Winter came early to the headwaters of the River Raisin, and I hunger from a lack of fresh venison.

Brown hair flashed, close to the ground in the elder bushes that kiss the tawny swamp grasses. A cottontail rabbit hopped twice more. I glance right, then left along the last deer trail in the bottoms. I long to see the rabbit again; such is the desolation of December.

As I watched, I felt my body begin to drift, lulled by the constant ke-honking of the geese and the mesmerizing beauty of the falling snow. My right arm adjusted the Northwest gun on my lap. I let my mind wander. Then I felt the weight of an empty brass kettle in my right hand…

Ziibi Ikwe, River Woman, my adoptive Ojibwe mother, sent me for water. It was warm and pleasant. The leaves had turned and the grasses began to yellow. I walked up the dirt path that angled through the forest’s underbrush, up over a slight knoll, then down to the river. Just over the crest of the knoll, I spotted the back of a cottontail rabbit, half hidden in a grassy form.

I don’t know what possessed me, but I stopped and looked about. A broken branch, stout and heavy and club-like, rested beside the trail, almost beside my moccasin. I slowly bent forward, set the kettle down and grasped the branch. I used a thick oak trunk to conceal my approach. The rabbit didn’t move. After much contemplation, I sprung up and forward with a mighty bound and brought the club down hard across the rabbit’s neck.

I stood amazed, then grabbed the rabbit by its hind legs and carried it back to the lodge. An elder, Migizi Miigwan, Eagle Feather, laughed and called out to River Woman. With much animation he told how he saw me walk towards the river, then look about. He thought I might try to run off or escape. He grew concerned when he saw me bend over and disappear.

When he saw the branch in my hand he said his concern turned to curiosity. He told how I stalked to the tree, then waited for the longest time. He said I pounced like the red fox leaps upon its prey. “He shall be known as Msko-waagosh, the Red Fox,” Eagle Feather proclaimed as he held the rabbit high and patted me on the back.

I often describe traditional black powder hunting as an addictive treasure hunt—an endless search for historical nuggets that help unlock the secrets of long ago. And when I talk about creating a persona, I compare that persona to a vessel that contains all the nuggets gathered through years of research and countless wilderness classroom lessons.

As I have mentioned before, when I found myself returning time and again to the writings of John Tanner, Jonathan Alder and James Smith, I decided to create a returned white captive persona. In essence, I consciously embarked on a new and exciting treasure hunt with an almost empty vessel, save for the prior knowledge I had accumulated about Tanner, Alder and Smith.

A common thread that flows through many of the “captive narratives,” is the Native American name given to an adopted captive. James Smith writes:

“They called me by my Indian name, which was Scoouwa, repeatedly…” (Smith, 54)

“By this family I was named Shaw-shaw-wa ne-ba-se (the Falcon), which name I retained while I remained among the Indians.” (Tanner, 15)

Being influenced by Tanner’s story, I thought from the outset that the new historical me should have an Ojibwe name. I sought the advice of other living historians, including readers of this web site, and I received a large number of suggestions, but none seemed to fit the persona, at least as I perceived him. And much to my surprise, “red” kept coming up in the ideas of others, attributed to my habit of hunting in a crimson trade blanket. 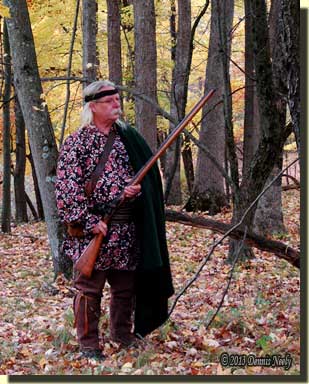 Not wishing to force the issue, I set the notion aside and moved on to other aspects of this infant persona’s development. The fall hunting seasons rolled around and occupied most of my time. The onset of an early winter pushed surviving the cold to the forefront of my wilderness classroom lessons, and then in late December I found myself sitting in the barren river bottom, immersed in a pristine 18th-century moment.

John Tanner spoke of visions and dreams, and I don’t know how better to characterize the few fleeting moments that I experienced that morning. I had reached a tolerable degree of cold, the geese just kept coming and their honking overwhelmed all other woodland sounds. The falling snow, the swirling wind, the popping trees and then the rabbit ushered my mind into historical oblivion.

Then a conglomeration of nuggets blended into a tale that seemed real. A few days earlier I came across the name of “River Woman” while researching. I wrote that name down on a slip of paper and dropped into the blue folder that kept odds and ends that might prove important as I fleshed out the native captive persona. I glanced at another scrap of paper that had “Eagle Feather” scribbled on it. A day or so before the hunt, I read through a short passage in Jonathan Alder’s journal that told about his first escape attempt:

“They now ventured to call on me to do some little duties and the white man told me to take the brass kettle and go to the branch [Scioto River] and fetch some water…So when I got to the branch, I dropped the kettle and ran up a hill about one hundred yards from the stream and crawled into a hollow tree… (Alder, 40-41)

The mind is a powerful mixing bowl. I felt the weight of Alder’s brass kettle in my hand. I pictured a rolling hill and over that a sandy spot along the River Raisin. Ziibi Ikwe entered the picture, as did the rabbit that hopped in the elder bushes forty paces in front of me. The frustration of not bagging any game that fall manifested itself in the stout branch. I imagined pouncing on that rabbit and then that phrase mulled over and over in my mind: “like a red fox leaps on its prey.”

The following February, in the midst of an Online Anishinaabemowin Webinar, my alter ego gained another nugget. The instructor, Isadore Toulouse, was talking about the proper way to say one’s name in the Ojibwe language. Isadore glanced at the chat window, then responded to the questions. When he got to mine he said: