No Chance for a Shot…

Alert ears appeared, then twitched. Beyond the red oak, in the midst of the tangled autumn olive bushes, a doe walked on the closest trail. A skinny, gangly-legged fawn followed with its head down, sniffing, exploring. The pair stopped short of the dark oak trunk and browsed. The fawn pawed at the leaves, all brown with a light dusting of fresh snow.

In a few minutes, the mother and daughter moved on, passing within 15 paces of the cedar tree I sat by. If they chose the west fork, they would soon get wind of my deathly presence. Instead, they took the right fork and ambled downhill, out of sight in the thick brush. They came and went without making a sound, even when the fawn nuzzled under some disturbed leaves.

Uphill, a deer’s front legs took two steps, then paused just in front of two cedar trunks, growing side by side. A fold of the scarlet four-point blanket sheltered my right cheek from the morning cold. I turned for a better look, watching, waiting. A mature, barren head dropped to the ground, then rose up quick and stared straight ahead. The doe stood rigid and stiff-legged, like a statue. I smiled. I recognized that behavior.

Just over my right shoulder, two cedar trees lay sprawled on the ground. Sharing a common root ball, the two cedars toppled years ago in an ice storm. All that remained was a labyrinth of grey, thumb-sized branches protruding from the dead trunks, yet enough to form a hefty curtain.

As I concentrated on the doe, I saw the tip of an autumn olive branch shake over the downed cedars. Greenish-yellow, fish-shaped leaves scattered as the intermittent rubbing grew more violent. I breathed into the blanket folds, slow and deliberate, not wishing to send a telltale message downwind to the new arrival.

I felt safe and frustrated, all at the same time. The brushy location that I chose for my own protection was now protecting a buck, a descent one judging from the size of the quivering autumn olive. I glanced at the doe and then back to the left to make sure I was not being watched.

Satisfied, I began to turn to the right, using the cedar trunk I was sitting against as an additional shield. I pulled up my left knee and rested my left elbow on it to support the Northwest gun’s forestock. The autumn olive stopped moving. “A clean kill, or a clean miss. Your will, O Lord,” I prayed in silence.

Here and there my eyes caught movement behind the two cedar’s obscuring curtain. A creamy-white crown sporting eight antler points, spread an inch or so past the buck’s ears, drifted along the top edge of the dead branches. I couldn’t see a head, let alone a body. He walked to another cedar with the bark stripped away; the sapwood still had a shine to it. He stood broadside at what later proved to be 14 paces, protected by the entangled armor of the two ice-toppled cedars.

The buck rubbed three times on the stripped cedar, then turned north and walked uphill. All I saw was a tail, wide hams and stout hind legs. A tail is never a good target. Sandhill cranes called all around and a fox squirrel bounded from a craggy box elder that grew between the doe and my cedar haven. Despite the doe’s demeanor, I thought perhaps the buck might walk away.

At about 25 paces he turned southwest, setting a true course for the doe. She fidgeted, then took two steps and stood still. The trade gun’s English flint clicked to attention. The turtle sight moved to the slim opening behind the doe. The buck kept plodding along with its head hung low to the ground and its nose stuck out.

The doe took two nervous steps, then with two more she vanished in the thick brush. The buck passed behind a half dozen cedar trees, never offering a chance, but I knew that would be the case. The turtle sight waited at the north side of the opening as the creamy-white tines wove in and out of the tight-packed cedars. But the buck never appeared.

Instead, a tail flicked and that big rump veered uphill, then took a sharp left. As they almost always do, the buck paused where the doe once stood—not in the opening, rather three paces beyond, behind the two cedar trunks that shared a common root. The buck’s left front leg showed to the left of the cedars, his left hind leg lingered to the right. The two cedars formed an impenetrable palisade; there was no chance for a shot…

Brush hunting has its advantages and its disadvantages. In simplified terms, I see more deer in heavy cover, especially mature bucks, but the nature of such habitat restricts opportunities for a clean, humane kill.

As a traditional black powder hunter, I must limit my alter egos to living within the parameters of late-18th-century life near the headwaters of the River Raisin in the Old Northwest Territory. Based on my reading of many old journals and narratives, I strive to become a tenant of the forest, to come and go as the other woodland creatures do, utilizing the natural cover to my best advantage. The greatest tribute a woodsman can be paid is to go unnoticed, not only by his peers, but also by the critters of the forest. With that goal in mind, I spend a fair amount of each sojourn still-hunting, but I take a stand with equal regularity.

If, during the course of a still-hunt, I happen upon an intended quarry, I take a knee to reduce my human profile, survey the situation and wait for an opportunity for a clean and humane shot to present itself. On the other hand, when I have a choice, I take great care in selecting an ambush location. Such was the case that morning.

I do not invade a deer’s sacred havens, because that drives a deer from his home territory. But the thick tangles a wary whitetail travels after the first few days of hunting season are a different story.

The two fallen cedars are hidden on a little knob on the eastern face of a long ridge. After the trees’ demise, when twigs and dried needles clung to the branches, I sat within a hole chopped in the cedars’ boughs. In recent years, I found the powder-keg-sized cedar afforded the same protections. Judicious pruning with a trade ax allows me to sit with my back against the trunk while dead lower branches break up my outline on either side.

The tight-packed cedar trees that cover that slope bend the wind in a south-to-north direction along the ridge’s contours, and on occasion, that particular tree is “scent neutral,” somehow directing my scent upward and/or minimizing it, rather than carrying it down the hill. This seems to happen when a light rain or snow is falling. I think the branches, the thick cover and the moisture absorb the offending odor—being wrapped in a smoky, wool trade blanket helps, too.

With my back to the cedar and facing south, I have a series of openings straight ahead, the longest two being 35 paces. To the east, the hill falls off limiting me to 25 paces at best. The sighting distance to the northeast is 30 paces, 18 or so paces behind, and the two downed cedar trees block any shot to the northwest. There are three 15 to 20 pace lanes due west, and the one opening that reaches up to the two cedars, about 35 paces distant. 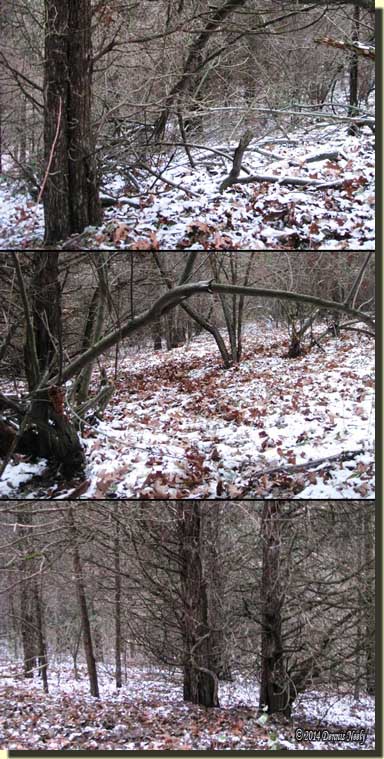 Three views from a different brushy paradise. Top: A doe trail is to the right of the cedar, 15 paces out. To the left of the cedar is a fair-sized opening with a clear shot out to 35 paces. Center: Two slim lanes straight ahead are each 25 paces long. Two trails cross within that distance. To the left, the tree blocks my shape and offers no opportunities. Bottom: Typical cover in semi-dense brush. The maximum distance on either side of the two cedars is 20 paces. A major trail is just 10 paces beyond the two cedar trees, and I think, worth  suffering through the site’s limitations.

Taking into account that I am comfortable unleashing a death sphere from “Old Turkey Feathers” out to 65 or so paces, some observers might consider the big cedar tree quite limiting. And in a technical sense, this is true. The longest available shot is half of the smoothbore’s effective distance, and the average is much less, but there are three major tradeoffs that tip the balance in favor of this lair, and others like it.

First, that knob is a crossing point within semi-dense cover, and the only effective way to hunt it is to be situated close to the middle of the thoroughfare. From past experience, the lay of that hillside does not allow any clear shots at deer crisscrossing the little rise.

In the early years of my time traveling exploits, I skirted that knob on numerous occasions only to walk away shaking my head in total frustration; on average, I was busted seven times out of ten. Plus, the wind currents that work for the woodsman at that tree, work against any other location that overlooks the knob.

Second, the same habitat that protects the deer also protects the traditional woodsman. This is true of almost all heavy-cover locations. The hunter is most vulnerable approaching the thicket, but once inside a sense of relief and invincibility washes over one’s persona, assuming an alter ego exercises sufficient care in using the natural cover to maximum advantage. Being well-concealed, controlling unnecessary motion and avoiding eye contact leaves detectable scent as the only major betraying factor.

Third, and perhaps most important, a deer can pass through the area without ever knowing it is in imminent danger. This requires a little luck, as occurred on that morning. But the end result is the 8-pointer came within 14 paces of probable death and continued on without an inkling of the fate that awaited him.

Granted, the entangled armor prevented me from finalizing my intent, but at the same time, other than some residual scent that lingered on into the night, the buck did not experience an educational event that would preclude him from returning to that knob. As a traditional woodsman, this is a huge benefit that outweighs not getting a shot. And that is why I will often tell people, “I am a brush hunter.”

Wade into the thicket, be safe and may God bless you.

One Response to No Chance for a Shot…