The Curse of Tanner’s Passage

A whittled twig pegged the Northwest gun’s touchhole. The worm spiraled on the hickory wiping stick. The wire coil bounced when it hit the oak-leaf wad. A hollow scraping sound followed the natural wad to the muzzle. With a rattling clatter, the wiping stick slid down the bore. The worm twisted into the packed lead shot. I withdrew the rod and leaned it against a nearby red oak trunk.

After loosening the shot, the load of #5 shot rolled into my left palm. I leaned “Old Turkey Feathers” against the tree and began dribbling the shot back into the shot pouch. With much reluctance, I left 1798 and walked to the pickup, tossed the lead shot pouch on the front seat and picked up the buckskin pouch that held the #4 bismuth shot.

As if on cue, the shadowy-shape of deer emerged from western tree line, maybe thirty paces distant. I shook my head and chuckled as the charger of bismuth shot rattled down the bore. As an experiment, I reused the pulled oak-leaf wad. The wiping stick’s brass tip tamped it firm; I shook the barrel to make sure the load would not dislodge.

Returning to mid-October, in the Year of our Lord, 1798, was not difficult. I crossed time’s threshold somewhere down the hill and around the bend. My buffalo hide moccasins skirted the clearing, whisked into the cedar trees, then turned south, following a seldom-used doe trail. My wool leggins avoided the raspberry tangle’s sharp claws. Another hard right and a quick duck under two big cedar trees brought me to the water’s edge. A long, fallen cedar bough that touched the calm water offered sufficient shelter. I glanced first north, then west.

“Cheeri-leee, Cheeri-leee.” A robin chirped, somewhere near the west edge of the clearing. In a moment, the morning’s first rays lit the oaks and maples that lined the far bank. Well to the north a wild turkey uttered a garbled gobble. Nine crows cawed over the swamp, winging west to seek out a fracas with an owl or hawk.

The turkey gobbled again, or at least tried to. The notes seemed malformed, mushy and juvenile. My alter ego pondered the calls’ timidity and soon came to the conclusion this was a spring bird practicing for what lay after the harsh winter, should he survive.

The young gobbler answered, “Gob-ob-ol-ow-ach-obl!” Off in the swamp, a bit east of the south island, a second bird responded, sounding just as pitiful as the first. In due time the wind pushed the clouds north and the sky cleared to a pale blue. The sun grew brighter and warmer as it rose above the tree line—promising  for wild turkeys, but discouraging for any chance at a low-flying mallard or wood duck.

As a traditional black powder hunter, my historical research centers on the simple pursuits of 18th-century woodsmen, alluded to in sketchy journal passages. Rare is the account that offers step-by-step instructions. True, some such writings exist, but for the most part the musings of most hunter heroes fail to linger on the particulars. That is both a blessing and a curse.

One aspect of this research, at least from my perspective, is to determine what items were available to a trading post hunter in the Lower Great Lakes region, near the headwaters of the River Raisin in the decade that spanned the 1790s. Understanding what was available helps establish the material limitations that I must abide by if I wish to re-create a traditional, 18th-century hunt with any semblance of authenticity.

Yet, a certain amount of latitude must be given to the old journals and documents as to time, place and station in life. For example, the journal of Francois Victor Malhiot addresses the North West Company clerk’s dealings from July of 1804 to June of 1805, south of Lake Superior. That is not 1798, on the banks of the River Raisin, several days west of Lake Erie, but his writings are representative of North West Company inventories and practices.

In Malhiot’s journal, he makes several references to “wormers,” or tapered spirals of wire also called “gun worms” or “worms.” Malhiot’s records value a dozen wormers at one “plu,” or prime beaver pelt. His ledger sheets break down the gifting of wormers to the “savages,” one or two at a time (Malhiot, 221 & fold out ledger pages).

Likewise, the 1777 account inventory of the contents of a Montreal canoe sent to David McCrea at Michilimackinac contains an entry for “1/2 Gro [gross] gun worms,” packed in bale number 3. (Armour, At the Crossroads, 200) Other inventories and clerks’ journals include references to gun worms. I doubt anyone will argue the authenticity of a trading post hunter in the Lower Great Lakes of 1798 having access to or using a gun worm.

Adding a researched accoutrement to a living historian’s shot pouch is only a fraction of the equation, again, from the traditional hunter’s perspective. I could stop there and pull out the gun worm to show interested on-lookers what was available and likely carried by a late-18th-century woodsman, but learning how to use the gun worm and incorporating it into a real history-based hunt is another matter.

I hunted wild turkeys the day before that mid-October duck watch in 1798. “Old Turkey Feathers” held a heavy charge of 3Fg black powder and a comparable measure of #5 lead shot.

That morning was overcast. I changed my mind and decided to hunt waterfowl instead of turkeys. To comply with modern game laws, I had to change the load to non-toxic bismuth shot. I never gave pulling the oak-leaf wad with a gun worm a second thought. I’ve been using a worm for about four years now. As I changed the load, I made a point of leaving the lead shot pouch in the truck, again to comply with waterfowl hunting regulations.

In addition, I had set aside the pulled wad, because I wanted to see if it could be reused with satisfactory results. It can; I killed a wild turkey with that load a couple of days later, but that is a story for another post. 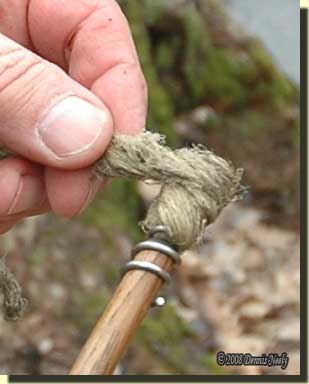 I also use a gun worm wrapped with tow to clean my Northwest gun and I have come to prefer the water-tow-swab method. But there is one aspect of the gun worm that I can’t seem to master or figure out: pulling a round ball.

In the last few years I have concentrated on using natural wadding in the smoothbore with a bare death sphere. The accuracy is not as good as a patched round ball, but it is acceptable. I am still working on loads and learning at the range, but from time to time I have had necessity to pull a round ball held in place with natural wadding, and my results have been less than consistent or successful.

Now this may not seem that important, but for me it is. I am driven by an addictive compulsion to match as closely as I can the writings of my hunter heroes, to learn their methods and incorporate those practices in my traditional hunts.

John Tanner is responsible for perpetuating my frustrations, or at least one of his passages is:

“As I was one day going to look at my traps, I found some ducks in a pond, and taking the ball out of my gun, I put in some shot, and began to creep up to them. As I was crawling cautiously through the bushes, a bear started up near me, and ran into a white pine tree almost over my head. I hastily threw a ball into my gun and fired; but the gun burst about midway of the barrel, and all the upper half of it was carried away. The bear was apparently untouched, but he ran up higher into the tree. I loaded what was left of my gun, and taking aim the second time, brought him to the ground” (Tanner, 60).

The “…taking the ball out of my gun,” statement is the one that is giving me sleepless nights. To prevent a short-started ball and burst my own gun barrel, I always tamp the round ball either on the powder charge or on a leaf wad over the powder and then add a leaf wad over the ball. The worm pulls the over-the-ball wad with no problem, but most times it will not dislodge the ball itself, especially if the barrel is fouled.

Jonathan Alder speaks of unbreeching a barrel to remove a wet load (Alder, 132), but that is not the circumstance described in Tanner’s tale. Tanner says he took the ball out with an air of confidence that implies, at least to me, “Hey, I do this every day!” And for me, that is the curse of this particular passage, but at some future time I expect that will change, too.

8 Responses to The Curse of Tanner’s Passage