Winter moccasins stalked a favored lair. The scrub apple tree appeared taller, the two red cedar trees fuller with more dead branches on the trunks’ lower third. The first autumn olive to the south arched eastward, its upper branches touched the sedge grass at the swamp’s edge. I knelt. The view to the north and to the south was different, but a woodsman expects that from year to year.

Aching hips searched for a comfortable spot on the woolen bed roll. Cold fingers pulled the outer layer of the scarlet trade blanket up around stiff shoulders. The black stripe at the four-point’s hem ran vertical, following the contour of each arm. With the prime checked, the Northwest gun rested across dark-blue wool leggins dotted with stick-tights and tiny burrs.

Down the way, on the swamp’s opposite bank, two does, each with a trailing spot-less fawn, exited the path that crosses a few paces north of the mud-clogged spring. Beyond the deer and over the small hill, three black-bodied wild turkeys perched in the top-most branches of a huge cottonwood.

Eleven Sandhill cranes flew overhead, east to west, each trying to speak at the same time: “Urrr-ggooou-aaa, Urrr-ggooou-aaa.” The biggest doe stepped to the north, then disappeared into the tight-growing cedar trees. I lost sight of the others.

Maybe twenty minutes later, putts and clucks from agitated turkeys crescendoed into a full scale ruckus, again, over the small hill and not far from the cottonwood. Without much conscious thought, the Northwest gun’s muzzle eased southward, and my glances lingered in the direction of the fuss.

Straight across the swamp a small doe plodded through the autumn olive bushes, seventy or so paces distant. The wild turkeys settled to an occasional bantering of putts. Two strings of Canada geese ke-honked over. Another deer, then another passed south to north, but I had no way of determining if these were the same whitetails I saw earlier or different ones. And where was the fourth?

Ears perked up in the deep swamp grass, eighty-plus yards away, this side of the mid-point between where I sat and the muddy-spring trail. The new arrival, a fair-sized doe, took her time crossing the swamp, from my side to the far edge. But once the shoulder-high sedge grass ended, the doe bounded up into the cedar trees and out of sight.

Not five minutes later, a set of white tines, two points up on both sides plus the beam tips, crossed where she had, but without the same caution. This fine young buck stopped at the short grass and sniffed the ground like a hound that’s lost a scent. His head popped up, he licked his shiny black nose, then looked to the north. The six-point had no brow tines. With a fast walk, he, too, melted into the cedar trees.

In due time, three more does picked their way through the autumn olives and cedar trees straight across from where I sat. Then a plump rump came and went in a shadowy space between two cedars, to my right, up the hill. I saw a hind hock. Then the six-pointer’s head nuzzled the ground as he stepped into an opening. He turned sharp to the south, then back to the north before raising his head and walking down to the crooked box elder.

Facing straight at the wild apple tree in front of me, the buck dropped his head to the scrape pawed out between the tree and the swamp’s east edge. The scrape was just beyond “Old Turkey Feather’s” effective distance. Sitting patient was the only choice.

I find the comings and goings of white-tailed deer fascinating, whether viewed from an historically-correct 1798 perspective or in the context of the modern-day here and now. And despite fifty years spent on the North-Forty, if I wish to be made a fool of, I simply have to prophesy to an inquisitive bystander what the deer are going to do at any given point in time.

Unless a deer has a distinctive identifying feature, it is almost impossible to follow that deer’s movements once it leaves one’s sight. When the two does with fawns melted into the cedar trees, I couldn’t help but wonder if I would see them again that 18th-century November morn, and if I did, how would I know for sure they were the same critters?

The only true way of knowing would be to get up, walk to the crossing and take up their tracks, but the terrain, to say nothing of other whitetails in the area, deem that an almost impossible task. Plus, such a bold action would spook any and all deer close by, or at the very least, modify their true habits.

Now don’t get me wrong on this point. Countless times I have tracked and backtracked deer just to learn what they did or did not do on a particular hill or at an important trail juncture or in the hidden corner of a dense thicket. Unraveling these mysteries are, after all, basic lessons for the 18th-century wilderness classroom.

Some of these woodland studies are best undertaken when it is not open deer season, yet some offer the greatest fruits only during the height of a chase. Experience dictates the difference, even if that experience is the eventual result of a poor decision. And I would be less than honest if I didn’t note that in recent years I find myself interrupting a still-hunt more often than not because I don’t understand what the deer did or why. I suppose that comes with the gray hair.

Fresh snow helps, too. During Michigan’s December muzzle-loading season I find my alter ego striking off on a specific buck’s tracks in hopes of coming upon him in his bed, or better yet, waylaid by the scent of a receptive doe. Such stories are numerous with mixed results; most times the tracks cross a fence and enter onto someone else’s property—sometimes never to be seen again.

As the six-pointer walked back up into the cedar trees, my mind kept mulling over this topic. About five years ago a family member called, asking for help getting a fine doe out of the woods. It was already field dressed, but it was a long haul out and the dragging goes a lot easier with someone to share the story with.

I’m always up for such adventures, and in my growing excitement I asked where he was when he took the shot. He told me, and then I asked, “Where are you now?” He was on the opposite side of the swamp from where he shot the deer.

When I arrived, he retold how the doe had come down behind him, upwind, how he turned and how he saw her run off under the Hawken rifle’s thinning white smoke. He went on to say that he lost sight of her, then saw her on the opposite hill, before she stumbled and died. He said he never let her out of his sight as he crossed the swamp.

After loading her in his truck, I asked him to show me where he sat. He retold the story and I found the hair from the double-lung shot. Then I started off in the direction the doe had run, and he asked, “Where are you going?”

“I’m going to track this deer. You should come along.”

“So the next time you shoot a deer you’ll have a better understanding of what this one did,” I said as I found the first blood.

That doe proved difficult. The round ball was high in the lungs; most of the blood pooled in the chest cavity. A drip here and a small speckle there was all that marked its death trail until it got through the swamp. It kept to an earthen ribbon that many deer traveled on, which made matters worse. It took over an hour to unravel the first seventy or so yards of that deer’s escape. All the while I was teaching, explaining and once or twice, casting in circles to find the next sign. 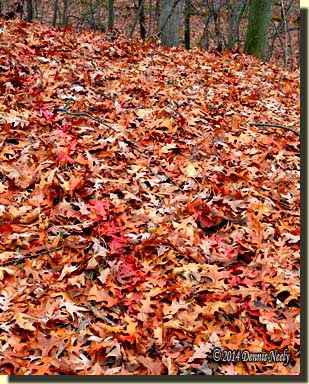 I had a similar circumstance this past week. I wasn’t much help, but a neighbor let me tag along while he dressed his deer. I helped him drag it out, all of forty yards, but not before I took a good gander at the trail that fine buck left on his death run. Such practices open up one of the greatest teaching tools in the wilderness classroom: following the blood trail of a wounded deer.

Sometimes I start at the shot, and sometimes I backtrack from the end to the beginning. Both methods offer unique insight into the instinctive escape routes taken by our beloved white-tailed deer. Such tracking is a sad and humbling experience, often marked with solemn prayers of thanksgiving, but it is also a tremendous learning experience, one that comes along once in a year or two, maybe less frequent.

And much to my surprise, tracking a dead deer is a part of the hunt that is often overlooked, muddled up by the exuberance of the kill, cast aside and forgotten like the entrails. Many, and too frequent, are the instances where an experienced hunter gives me a puzzled look when I ask if he or she backtracked the deer.

To some degree, tree stands or elevated people boxes give the modern hunter an advantage when it comes to recovering a wounded deer. I don’t argue that point, but a huge woodland lesson is outlined on the ground, if only one is willing to take the time to review the signs, learn the ways of the forest and pay reverence to the creatures we all pursue.

One Response to Paying Humble Reverence