Resurrecting an Idea from the Past

“Old Turkey Feathers,” a flintlock Northwest gun, leaned against a cedar tree, an arm’s reach behind me. A bare patch on that tree, stripped away by an unknown buck, faced us. Three other rub trees lined the swamp’s edge to the south. The rub-line began in the little poplar grove, twenty paces out in the big swamp, upwind of the cedar trees. The crossing trail through the grove exited the swamp at the farthest rub, thirty paces distant. 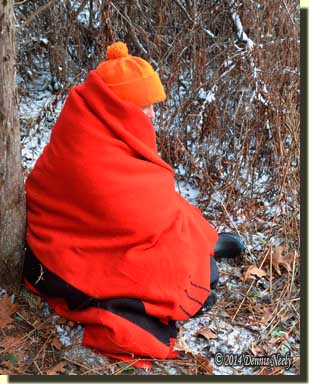 My daughter pulled a scarlet trade blanket tight about her body, then sat down on the snowy ground with her back to a different cedar. With a minimum amount of motion, I tucked the blanket under her crossed legs. All that showed were her eyes, nose and a black rubber boot tip.

Easing back on my haunches, I scanned the hillside and checked the trail to the north and to the south. Satisfied, I pivoted, adjusted my own four-point blanket, grasped the Northwest gun and sat against a third arm-sized cedar to the right of my daughter. “There’s a coyote,” she whispered. “It’s coming down the far hill at 10 o’clock, under the roosted turkeys.”

Eyes on full alert, she leaned forward. Her angle was much better than mine: she could see past the buck-rub cedar. I never saw the coyote, but as she whispered what she saw, I knew it would cross at the south island. The deep swamp grasses that hid the coyote also hid me. I shed the blanked, rolled up to my knees and rested Old Turkey Feathers’ forestock on the barkless trunk.

The sear clicked. The razor-sharp English flint snapped to attention. The turtle sight hovered on the first clear opening on the southeast trail. “A clean kill, or a clean miss. Your will, O Lord,” I prayed in silence.

The coyote crossed the first narrow opening at a fast walk. It was big and a dark charcoal grey in color. Much to my frustration, the underbrush was too thick for a clean shot. The turtle sight slid to the left, to a bigger clearing, just over the wooded mound’s crest. In the shadows I saw the canine veer to the north, choosing the trail that led to the thicket rather than continue on. I let out a deep breath. My daughter knew what that meant.

It wasn’t ten minutes before skittish deer began milling at the west side of the cattails, due east of the island. One-by-one they left the swamp and returned to the far hillside. The wild turkeys putted their disapproval. “There it is, on the hillside again, by the fallen oak,” Kate whispered, referring to the coyote.

Another wave of frustration washed over me, and I could tell it was bothering my daughter, too. “It’s just too far for the smoothbore,” I whispered. “All I’m going to do is educate the coyote. This is one of the few times I wish Old Turkey Feathers had a rifled barrel.”

The explosion of the coyote population is a real problem in this area, enough so that one of the few hunting rules on the North-Forty is: “if you have a good shot at a coyote, you take it. Even if it means you lose a chance at a buck.” That might seem a bit harsh, but chances to take out a primary predator like that mature coyote don’t come along very often.

But traditional hunters have a responsibility to know their own limitations and the limitations of the black powder arm they choose to hunt with. Every time a woodsman decides to unleash a death messenger, he or she must consider the circumstance and weigh the percentages of making a clean and humane harvest.

With Old Turkey Feathers the death sphere starts to “tail off” at 85 yards—taking a shot twice that distance is foolhardy and not respectful of the coyote. The island shot was maybe 60 paces, more than doable with the Northwest gun, but it just didn’t materialize like I hoped it would. And as frustrating as it is, waiting on a “best shot” that doesn’t happen is an integral part any hunting exploit, modern or traditional.

An Idea from the Past

Around Christmas a fellow traditional hunter hinted that he had a Civil War reproduction rifle sitting in his gun safe, and that it was for sale. He said it was a 2-band Enfield Musketoon. Any other Civil War rifle would not have attracted my attention, but the musketoon was a different story, and he knew it.

Now, I started down the path to yesteryear in the late 1970s with a borrowed Model 1863 Remington Zouave reproduction. Over the years, I’ve looked at a number of Zouave rifles on trade blankets or at gun shows. I’ve always fought the urge and walked away. They just aren’t Northwest guns, you know… 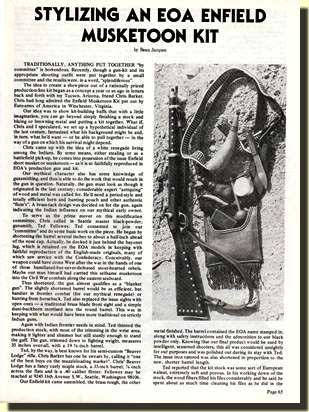 In the mid-1980s, MUZZLELOADER magazine published a story entitled “Stylizing an EOA Enfield Musketoon Kit” (May/June 1984, pg. 65 – 67). That article always intrigued me, and I never forgot about it. The article’s premise was not just completing a mass-produced kit, kit-guns were real popular in that era, but doing so based on an imaginative scenario: a white renegade living among the Indians out West who somehow came to own one of the short, 2-band Enfield muskets.

A “committee of experts” worked on that project, cutting down the barrel, reshaping the stock, finishing it, adding brass tacks and making a bag and horn that went along with the story. My retelling of the article and expressing a desire to distress this twice-shot rifle so it looks like “something found in a ditch” has met with a few, shall we be polite, “stern threats.” So for my Civil War re-enacting friends, relax. I’m now thinking perhaps the antiquing will be more acceptable on a Northwest gun?

This raises a good point for all living historians: spend a lot of time researching primary sources and applying that knowledge to the creation of a persona. With that in mind, I have begun looking for “after war” images of Civil War rifles, especially the 2-band Enfield Mustketoons. Ideally, I’d like to locate and actual example for study.

Right now, the gun looks “just out of the armory” new. Hard brush hunting will tone down that look and add “honest wear and tear.” And as I am learning, there are some authenticity issues with the reproduction itself, but that is to be expected. The question will be how far do I want to go with correcting the errors?

In the meantime, I can’t wait to shoot the Enfield, to work up an efficient load and maybe compete with it at the Michigan State Muzzle Loading Association’s State Championship Shoot or at one of the National Muzzle Loading Rifle Association’s shoots at Friendship. I see a white-tailed buck in this gun’s future. In the 1970s I killed a running rabbit with a 500-grain, hollow-based Minie ball. I’ve got to try to duplicate that again, too.

At the very least, the 2-band Enfield Musketoon will serve as an example of a good “settler’s gun” for someone just starting out in this hobby. In doing some preliminary research, I found mention of the Civil War muskets selling for $1.50 in the 1870s as “war surplus.” Although the reference is far from primary, it said many settlers, many of whom were war veterans, took these guns “west.” And right there is the start of a localized persona—relax, Bob, I’m not talking ditch gun here.

I’m looking forward to resurrecting an idea from the past and expanding further my education in the wilderness classroom. At the very least, I see a lot of range time just over the horizon, when Michigan’s temperatures moderate. And if my eyes are good and I can muster a proper load, that coyote, or maybe some of his pals, might run into a death messenger slung from a stubby-barreled Civil War rifle.

4 Responses to Resurrecting an Idea from the Past