A Necessary Clash of Centuries

Moccasins traversed that path before, hundreds, nay, thousands of times. Down the hill, across the isthmus, around the knoll, beside the sink hole and up the rise is a course followed without much conscious thought.

Leather hunting boots made that trip in my youth, then the double-soled elk moccasins bought with summer work money. Neatly stacked, worn out moccasins, hand-sewn from elk or deerskin, the early ones beaded with yellow, orange or blue pony beads, reside to the left of the middle shelf in the muzzleloading cabinet. Each pair followed that trail, too, who knows how many times?

Leather hiking boots with rubber-cleat soles made the trek that afternoon, the last week of January, in the Year of our Lord, 2015. Thread-bare Carhartt® overalls, unzipped below the knee, flapped and flopped, scattering snow every-which-way. A humming mass of yellow and black steel, flexing rubber and shiny tinted glass trailed behind like a reluctant coonhound bitten one too many times.

The beast angled down the hill, slipping sideways once or twice. It rumbled around the last red oak, then over the isthmus. The left track hugged a doe trail, upturned oak leaves a foot wide in ankle-deep snow. The two buckteeth of the Davco brush cutter disappeared under a thigh-sized oak limb, one I always stepped over, raised up, then eased it out of the path with nary a hint it had been touched. Six or so paces ahead it crackled and snapped over a smaller branch, fallen from the same tree.

At the three maples, the beast jerked to the left as the operator, Eric Kruger, made one track brake while the other kept moving. He smiled through the glass, then scowled, showing real concern. Palms facing, my mittened hands rose and fell twice, showing the preferred trail through the hardwoods. He nodded agreement.

Twenty-four paces ahead, the hideous squeal of the beast’s backup alarm sent a curious fox squirrel scampering for safety on the far hillside. I smiled, and Eric crumpled his eyebrows, oblivious to the squirrel, questioning why I saw humor in the moment. I scrunched my nose up, smiled and shook my head. He shrugged.

About where the oak is down at the northeast edge of the sinkhole the monster’s long, curved mustard-yellow arms raised the black cutter from knee high to chest high. Chopped twigs and long cream-colored cuttings littered the top of the mower deck.

Not far from the tree line my hands again showed the correct path. Eric nodded and I took a dozen steps to the north. When he passed I leaned against one of the last oaks. The brush cutter paused just after it entered the power line right of way. The diesel engine whined and the hydraulic motor started the big cutter disk rotating.

In a minute or so, Eric raised the black deck head-high, advanced half a machine length and settled the whirring blades onto a good-sized autumn olive. The engine never flinched. Forearm-sized chunks flew. Unseen wooden sticks drummed on heavy steel guards with a sickening certainty as the beast ground the bush’s barren skeleton to sawdust, followed by a final puff of dirty snow.

The last two weeks have been pretty hectic on the North-Forty, well, before that even. A 46,000-volt electric transmission line runs diagonal through the property. The line, which was built in 1955, is up for maintenance again, and this time several of the poles need replacement. 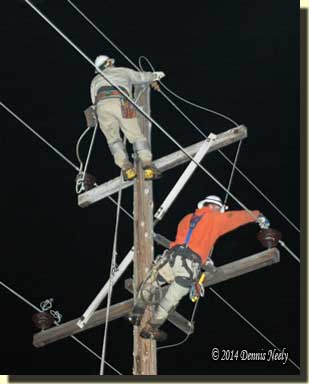 One, pole 1533, was changed out last May, just after midnight. The line was “de-energized” for the worker’s safety, and multiple crews replaced about ten poles simultaneously along a five mile stretch that Sunday morning.

The original plan included replacing pole 1534, about ten yards from the edge of the River Raisin, but the swamp was too wet and that attempt was scrubbed. The revised schedule calls for building a “temporary work road” to the pole this February by laying crane mats edge to edge out to 1534, approximately 680 feet across the Raisin’s treacherous bottomlands.

The work plan is quite complicated and required forestry preparation prior to mat delivery. The second morning the forestry crew was on site, I got a call from Eric Kruger. The Caterpillar 299C multi-terrain track loader couldn’t navigate a steep slope, necessitating 4 to 6 hours of additional hand cutting. He wondered if there was anyway the brush cutter could go “cross country” and get to the right of way. I said, “Yes,” but not before considering the ramifications of his request. The only possible access to that location was through one of my favorite 18th-century haunts.

I take pleasure in telling people the North-Forty has had little intrusion since it was first surveyed by Hervey Parke in 1815. Some of the oaks and hickories on the property were saplings when Parke’s crew passed by, lopping the Old Northwest Territory into mile-wide sections for Revolutionary War pension payments. I suspect the adventuresome times of the 1790s were still considered recent history back then. I explained that to Eric and his work partner, Rudy Martinez.

But being a steward of such a parcel can sometimes be a burdensome load, especially when the absolute necessities of modern society clash with life two-plus centuries removed. Under my watch, the guiding principle has always been to allow a minimum of intrusion. There used to be a sign on the front gate at the National Muzzle Loading Rifle Association’s Walter Cline Range at Friendship, Indiana, that read: “Take nothing but memories, leave nothing but footprints.” Although a bit simplistic, it is not all that far off from my property management philosophy.

Old woven-wire fences delineate the North-Forty’s boundaries. A rutted two-track that resembles a well-used wagon trail provides necessary access and then there is the power line. I don’t allow “people boxes,” as Tami calls them, tree stands or other such encumbrances. We have a whimsical face on one red oak tree along the road to delight the young grandchildren, and there might be one or two other transgressions.

But for the most part, there are no outward indicators of time or place. Living historians spend so much effort surrounding themselves with the period-correct trappings of a bygone era, why not expend the same degree of effort to maintain a period-correct stage upon which to live out the past?

Eric wanted to tie pink fluorescent tape to the trees that led to the right of way, citing company safety rules. I drew the line there. I told him to follow me or cut the brush by hand. “Leave nothing but track marks in the snow,” I said, then I started walking down the hill.

By the time I got to the isthmus I felt like I was betraying an old friend. The steady hum of the turbocharged diesel engine sounded ominous. I heard whine echo from the hillside across the nasty thicket, sounding of labor pains. When the brush cutter’s buck teeth slipped under the limb, I started to feel queasy, like I made a serious mistake, one that I would have to live with for years to come.

I kept glancing at the Cat’s back trail, but it was hard to see in the snow. It ran over a couple of autumn olives along the way, but I didn’t give them any mind—I have no love for autumn olives. Then Eric backed up; the shrieking alarm sounded like a red-tailed hawk on steroids. I saw the squirrel run for the trees, and I still wondered if I made the right decision. At the sink hole, the cutter’s guard skinned up two cherry saplings, but no more than the other buck rubs beside the trail. 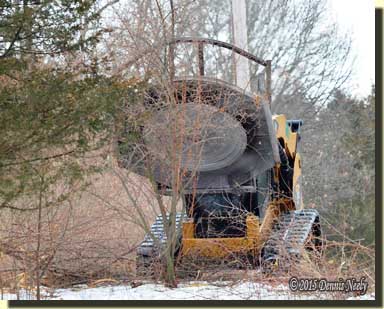 It took ten minutes to traverse the trail. Twenty minutes of grinding, chopping and puffing snow later the Cat 299C headed back for the two-track. Eric got there long before I did. As I walked the trail back, I wondered what I would see, or rather hoped not to see, in the spring.

On the Sunday following, 18 inches of fluffy snow erased any evidence of the beast’s traumatic journey. For now, at least, the footprints are gone and all that remains are memories of a necessary clash between centuries. But now it is time for the next phase of this odyssey to begin…

Venture back to yesteryear, be safe and may God bless you.

2 Responses to A Necessary Clash of Centuries