A Strange Mix of Frustration and Elation

Five Canada geese winged northwest. Silent, the black-necked grey ghosts flew in a lopsided wedge, three birds to the right, one to the left. Stroking hard and steady, the geese left little doubt as to their destination: the lily-pad flats, or thereabouts, on the River Raisin. I didn’t bother to look down, but rather peered through the cornstalks. 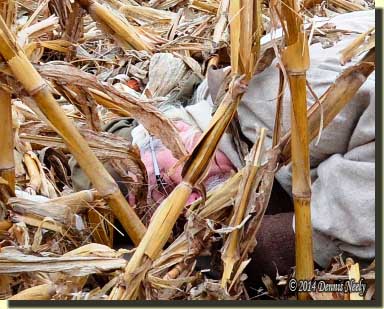 My head again rested on my right arm as I lay in my lair. Upon arriving on the cultivated knoll, I found two corn rows where a dozen or so stalks fell to the south. The toe of an elk-hide moccasin weaseled under the tawny-gold fodder. A few minutes of careful placement and rearranging fashioned the stalks into a fine cocoon for that evening’s ambush. It was the tenth day of November, 1798.

That sojourn was the fourth or fifth outing for a new-sewn, linen over shirt. As I breathed, a stalk slid off my left shoulder and fell against my bare cheek. I felt exposed to all creatures above, and whispered out loud that the fabric’s natural color might be visible to incoming geese, but I had little choice. The results of that hunt, plus a few others, helped convince me to dye the frock a dried-mustard yellow.

A chortling hoard of Sandhill cranes flushed from the hayfield of a homestead to the southeast. I laid still, fought the urge to roll over and just listened. It sounded like the cranes started to the west, turned about, then headed east. They grew silent, too, then all to once they appeared over my wool-clad legs, about as high as the five geese, following the same general course to the river.

In a while, five geese winged in from the northeast, the last place I expected. I first saw them over the top of my silver-rimmed spectacles, and although they seemed fuzzy, I thought they might settle down on the knoll. They didn’t.

A single goose came from the river, low over the cedar trees on the west boundary of the meadow. I noticed two does munching in the grassy field, but gave them no mind. The lone goose swung south. I lost sight of it over my legs. I looked down. I caught sight of it at my eyebrows, then it circled out front of me, swung south and again disappeared.

My left hand grasped the Northwest gun’s barrel about at the wedding bands. My right hand slid as far along the stock as my head would allow. I thought I heard the big bird’s wings, then saw it about forty-paces distant, much lower, but still flapping, not coasting. Again it swung south, and I started wondering how I should sit up if the goose landed to my back or even with my head. But alas, the moment of truth never arrived.

Seven more geese came over, fast and high up. The hourglass warned that the hunt must end. With no birds in sight, I scrambled to my feet, brushed off the dirt and adjusted my sash and shirt. I took one last look at the lair to make sure a necessity did not fall from my shot pouch. Satisfied, I struck off in a fast walk to the closest corner of the cedar grove.

I made the biggest cedar about the time I heard distant goose music. Frustration flooded over me as my deathly shape melted between two cedar trees. I counted nine in the first group that passed overhead, wings cupped and gliding straight for the knoll. Five, maybe six, came next, then…I don’t remember how many. The evening ended with a strange mix of frustration and elation, feelings I had not experienced in quite some time.

A Return to Goose Hunting

Thinking back, it’s been about six years since I hunted hard for Canada geese. A part of that hiatus is the current necessity of hunting over decoys. Gazing out over a dozen plastic goose bodies tends to derail an 18th-century mindset, no matter how hard a traditional woodsman tries to block it out. Another contributing factor is a generous fall wild turkey hunting season and a fair amount of bronze beauties. 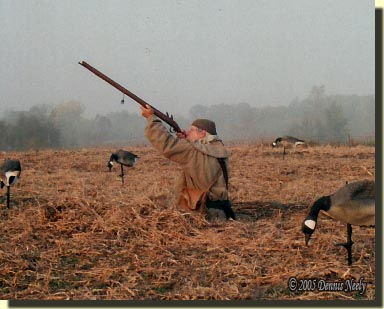 Covered in soy bean stubble, a trading post hunter for the North West Company sat up and took aim at a wild goose. Later that morning a pair of wood ducks dropped into the decoys and the drake did not leave.

This past fall I vowed to take my new persona waterfowl hunting more often, and I did, despite an absence of local ducks. Msko-waagosh, the Red Fox, bagged his first fall turkey, and that good fortune freed up additional hours for chasing ducks and geese.

This new historical characterization relies heavily on John Tanner’s journal, along with the journals of other returned native captives and fur trade company clerks. On at least one occasion Tanner writes about hunting ducks:

“As I was one day going to look at my traps, I found some ducks in a pond, and taking the ball out of my gun, I put in some shot, and began to creep up to them…” (Tanner, 60)

October 2, 1804: “…this forenoon, the Outarde brot me a Small Deer. [I] gave him 1 Gal: HWines and engaged him as my Hunter for the Winter. he being accounted the best of all the Indian [hunters] of this Department…” (Birk, 36)

Now today’s traditional black powder hunter must realize hunting ducks in the 18th century and in an 18th-century-manner on a 21st-century stage are two different undertakings, the latter demanding a heavy dose of measured compromise.

The cornfields on the North-Forty were down, but not picked by hand—a big green machine did that. The stalks were not gathered and fed to a few head of cattle, either. In addition, 21st-century Federal waterfowl regulations play an important part. “Old Turkey Feathers,” my Northwest trade gun, held a hefty charge of #2 Bismuth non-toxic shot. When the sun set a half hour before dark, “shooting hours” were over; thus the veiled reference to the “hourglass” in my journal. And on that pleasant evening, as I watched from the cedars, I swear I saw a goose land with a tattered copy of the waterfowl rules rolled up and clenched in a black webbed foot.

When establishing the parameters of a traditional hunting scenario, I now and again consult the common practices of the modern hunting community. For me, this opens the possibility of learning a new technique or changing my perspective in a manner that is still consistent with the tales recounted in the old literature. This habit also adds insight into how “educated” the modern critters are.

Likewise, I hope my 1790s writings offer moderns historical techniques that might work for them. A case in point is the use of wing bone turkey calls. I field a fair amount of questions about the calls at the outdoor shows, enough so that I always have the calls close at hand. In addition, I keep a single wing bone in my right weskit pocket. When the question arises, I pull out the wing bone and draw a cluck or two, to the astonishment of the modern woodsman—and sometimes call makers in other booths.

Before I took to the cornfield, I spent an evening looking through YouTube videos about goose hunting, decoy layouts and goose calling/vocalization. As always, I learned a lot!

First, a person needs a minimum of two dozen flocked decoys (four to six dozen is recommended), the kind that stand shoulder high on a white-tailed deer, to have any hope of bringing a goose close. Decoy placement is critical, too, marked out as “Xs” and “Os” in complicated schematics that would draw an envious gasp from any NFL coach. The geese that landed after hours must have missed seeing that one, because their ground formation looked hap-hazard.

Next, one needs a portable, pod-like ground blind, “mudded up” and adorned with state-of-the-art imitation foliage. Some companies displayed the latest in camouflage clothing patterns, “field tested” and “time-honored,” but no one explains how the geese can possibly see the hunter when he or she is closed up in a fiberglass coffin.

Many experts suggested their version of the “right” goose gun, chambered for 6-inch plastic suppositories sporting a double Nitro charge below a triple dip of kryptonite death bees, and equipped with a Rambo-inspired choke tube that marshals a uniform swarm out to 100 yards. As I watched, I thought perhaps that effective range was due to the intimidating size or the daunting number of the decoys, but I might have that wrong?

And much to my consternation, I learned that if someone wants to get real serious about goose hunting, “obsessed” might be a better word, that individual needs a 24-foot, tandem-axle, aluminum-clad “goose trailer” outfitted with neat shelves, wire-hoop hangers and plastic storage tubs. Oh, and a ¾-ton 4 by 4 pickup equipped with jumbo-mudder tires that can haul the trailer to the remote corner of a cornfield.

I mean no disrespect with the above comments; traditional woodsmen seem pretty comical and more than a bit daft to the uninitiated, too. All kidding aside, when it comes to hunting methodology, I don’t believe I have ever felt as inadequate or as uninformed as I did that night. The extent to which today’s geese are hunted, the sophistication of the techniques used and the mimicking of their vocalizations, surely educate the birds and thus put the traditional hunter at a severe disadvantage.

But so what? I still kept trying, and yes, on some of the hunts I used a few “1990-era” goose shells placed behind my back where they didn’t detract from my 18th-century visions. I hope that I might construct a couple of Native-American-style goose decoys from cattails later this summer; that project is at least scribbled on my “to-do” list. And I might add that I set out the decoys in the same hap-hazard manner that I observed that first night—no “Xs” and “Os.”

I ached a lot from lying on the ground, but I always arose with a broad smile on my face. More times than not the geese dropped into the cornfield after the sand was gone from the hourglass’ upper globe.

Yet I came close on a number of occasions, three of which I simply blew a great chance by not sitting up and just taking a shot. I was trying too hard to make sure the goose was within my effective range, to hunt in a respectful manner, and I misjudged the moment of truth. And in hindsight, those efforts provided way more elation than frustration.

One Response to A Strange Mix of Frustration and Elation