A brilliant red cardinal hopped twice. The songster stopped. Its crimson top knot canted to its left. A potential morsel on the thawing earth held its full attention. It hopped twice more, then took flight for no apparent reason. Over the gulley, beyond the tall cedars, another cardinal began to sing: “Whit, whit, tsu, tsu, tsu, tsu, tsu…”

Several “ke-honks” from distant geese moved to the southeast. I wondered if the River Raisin’s channel was open. It wasn’t a couple of days before, but the bottoms were too far to walk just to investigate, at least not that morning.

A lone crow “caw, caw, cawed” overhead. Two others answered off in the direction of the meadow. Then I heard a robust “Cheeeri-leee, cheeeri-leee” at the edge of the hayfield, near the old golden hick’ry, but I couldn’t see the robin.

The rising sun felt warm and refreshing. The air smelled heavy with the scent of melting ice and snow. As I stood pouring out a charge of black powder, I felt the half-frozen dirt become squishy, soft and slippery. 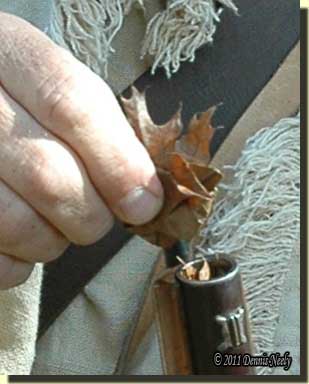 The brass measure clanked against the Northwest gun’s browned muzzle. The cardinals continued their melody. A rumpled oak leaf followed, tamped firm by the hickory wiping stick. Two at a time, I picked lead buckshot from the palm of my left hand and dropped them down the bore. The first four thudded, but after that I heard nothing. I counted to myself in a low whisper: “…nine, ten…eleven, twelve.”

The Canada geese angled southeast, then it sounded like they were circling more north than east. Another leaf wad squeaked a bit as it slid down the fouled bore; the wiping stick thumped three times. I dabbed my right finger in the little brass container, then smeared a bit of lube on a thick square patch. Three fingers on my left hand held the trade gun’s muzzle; my thumb and forefinger positioned the patch over the bore. I centered a death sphere and pushed hard with my right thumb. The wiping stick did the rest.

The robin sounded closer, but I still could not see it. I watched the big white oak longer than I should have, but it was a glorious morning. Black granules glistened in the sun as powder half-filled the pan. The frizzen snapped as it closed. In due time the back of my left hand rested firm as I steadied the Northwest gun’s forestock. The turtle sight found the critter’s shoulder, just behind the right front leg. I exhaled. There was no need for the hunter’s prayer.

White smoke roiled, then hung in the morning calm. The joyous stench of spent gunpowder bit my nose and left me wanting more. I eased the smoothbore down and canted my head to the right. “Looks like I killed another paper coyote,” I said with a chuckle.

A light frost firmed up the mud overnight, at least enough so I could drive back into the North-Forty and do some shooting. I’ve been trying to thin down my “to-do” list the past few weeks, but it has been hard. I forced myself to take a little time that morning and just get into the woods. I came home feeling I had been on vacation for a week!

The point of the morning’s short sojourn was to continue testing the buck and ball loads in the Northwest gun. I started this series of wilderness classroom lessons back in mid-February, but I was hesitant to continue while the power line crews were still working. Plus, it is amazing how a week slips by, even with the best intentions.

This all came about because I wanted to hunt coyotes, and I felt that my eyesight and the size of the critter’s vital area limited a round ball in “Old Turkey Feathers” to about 45 paces at best. From prior tests, a buckshot-only load was effective to 35 paces. I started experimenting with the buck and ball load in hopes of still killing the coyote at 45 paces if the round ball missed.

I started the second series of tests with a new craft-paper target, stapled over the original cardboard target. In the days that followed the first test, I wondered more and more if a “balanced load” by weight would perform better than the first test results.

From the outset, I would like to make it clear that I am not making loading recommendations here. Every smoothbore is different and the shooter must know and understand what loads are safe in his or her muzzleloader. All I am doing is reporting what process I followed and the results of the tests in my trade gun.

In the first test, I used a charge of 60 grains of 3Fg Goex (equivalent to 75 grains of 2Fg) black powder. I added an oak-leaf wad the size of the round ball (about 5/8-inch in diameter), tamped it firm over the powder and counted out eight #3 buckshot pellets.

From a previous classroom session with buckshot, I learned that four pellets would lay flat against the wad, so I used eight to give two layers. Another leaf wad of the same size held the buckshot in place. I then dropped a .610 round ball down the bore and used the equivalent of a half wad to secure the ball tight. I paid particular attention to making sure all load components were seated tight against the powder to avoid a “short-started projectile package” that might rupture the barrel.

Using a hand-drawn coyote target, I stepped off 35 paces and fired three shots. I numbered each hit with a felt pen and recorded the results. I repeated the test at 45 paces, and followed the same procedure.

At the time I made some generalizations about each set of results. I did not move much past “what if” speculations, in part due to my disappointment with the 45-pace target. But like always, a few answers led to more questions.

The total load in the first test weighed about 530 grains. My normal turkey load of #4 shot weighs 570 grains, so I used that as a maximum load. I started looking for ways to increase the number of buckshot pellets to twelve, about 280 grains. I had some .575 round balls, which weigh 285 grains, bringing the total payload to 565 grains, just within my limit. I knew a heavy patch would improve the accuracy of the smaller death sphere, the question was “how will the ‘balanced’ load perform?”

I started down the road of making generalizations, but I knew better. I took the results and plugged them into the four tables above, then began making comparisons. As a traditional black powder hunter, my goal is a clean and humane kill, so why not evaluate each shot on whether it was reasonable to assume the coyote pushed up daisies?

By breaking each load into the two components, a round ball and buckshot, I was able to assess the effectiveness of each “chance” I had to take the varmint. At 35 paces, both loads tallied five kills out of a possible six chances. Looking at the bigger picture, one or more of the components killed all six coyotes.

At 45 paces, the bare-ball load was ineffective, and what really bothered me was the three possible woundings without a kill by the other load component. The balanced load was better with three out of six chances being positive, and all three coyotes taken. Keep in mind that with the Northwest gun, there are no “quick” second shots. 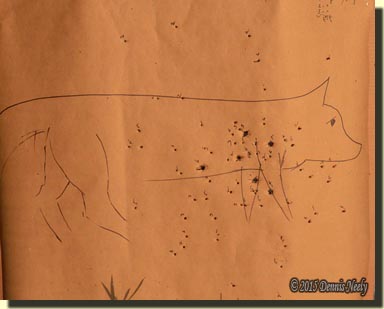 The tighter groups with the patched ball caught my attention. Changing the first load by patching the ball is not a big change, other than the actual load will no longer be “period-correct.” I haven’t addressed that issue, because this whole classroom lesson is about finding the most efficient load for affecting a clean kill on a coyote.

From past experience with my smoothbore, I know patching the .610 ball will tighten the groups and most likely result in at least two additional kills. In the first round, the fifth and sixth shots missed the animal and the accompanying buckshot hits were low. Perhaps this was hunter point-of-aim error? Likewise, a tighter patch on the .575 death sphere might improve the hits with the balanced load.

After studying the targets, two other issues appear. First, if the patterns moved up a few inches with the ball, there would be more lethal buckshot hits and a general improvement in effectiveness. Tightening the round ball group might affect this change and improve the killing potential of both loads.

Second, the greatest percentage of buckshot hits is at or below the impact point of the round ball. This is true on both targets at both distances. This may be a function of the amount of wadding or it might be due to the powder charge, in which case the buckshot load is losing velocity faster than the round ball. A lighter load consisting of a patched .575 ball over eight #3 buckshot might add some insight. Ideally, one would expect the round ball to impact in the center of the buckshot pattern, but that may not be the case with a buck and ball load.

So now I am left with a dilemma. Curiosity is pushing me to test further, but my time is limited and my bag of #3 buckshot is dwindling. The big question is do I spend that time and shot killing real coyotes or paper ones?

One Response to Killing Paper Coyotes