Bits and Pieces, Here and There

A brilliant sun did little to warm the cedar grove. Mid-morning rays created shoulder-wide golden paths, east to west, up and down the gentle slope. I paused beside a purplish-black-barked wild cherry tree. My gaze danced upon the greyish, winter-weathered oak leaves that carpeted the ground. The air smelled empty with the occasional hint of rotting deer pellets. I felt a shivery chill. I walked on.

Somewhere ahead a cardinal called, “Whit, whit, tsu, tsu, tsu, tsu, tsu…” Behind, one answered in like tones. The notes sounded crisp and clean and spring like. Winter moccasins followed an earthen trail to the west edge of the grove. My eyes continued the search out into the little prairie, but saw nothing. I turned back, then squinted as I crossed through a sun spear. About then a single gobble, quite a distance away, broke the monotony of my quest.

A ways on, fresh turkey droppings encircled the base of a modest maple tree. My course zigged and zagged through the grove’s lower half as if seeking an elusive blood trail. Just beyond a tangle of fallen cedar tree skeletons, forty-some paces distant, an odd, bluish colored object, bathed in sunlight, caught my attention. I turned away and dipped to the prairie’s edge again, but alas, in vain.

My blackish moccasins angled uphill to the northeast. At twenty paces I recognized the intrusive object. Without stopping I grabbed it with my bare left hand, wadded it up and stuffed it into my linen shirt, uttering a whispered snarl. 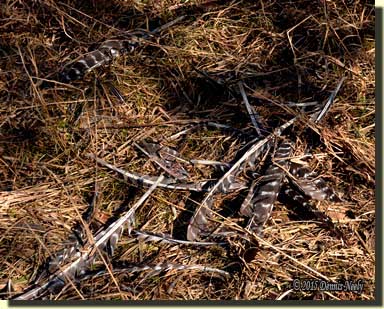 “Gob-obl-obl-obl-obl-obl!”Again the tom warbled, but farther away, which was a relief as I did not wish a chance meeting.

I next came upon a small grassy clearing. To the east of a rotund cedar tree covered with grape vines, I spotted bits of white strewn where they did not belong. I looked about as I walked straight for the sun-speckled patch. Again I grumbled, for I saw what I hoped I would not see: wild turkey wing feathers strewn about the ground. Two more feather piles to the east told the gruesome story. From the feathers’ shape and size, it was a young bird. Such is the way of the forest.

An Hour Here, An Hour There

That Saturday morning’s jaunt centered on hunting for shed antlers. It seems I found everything but an antler: a handful of wind-driven plastic grocery bags, a broken-over white ash tree, some new-fallen cedar trees, the green and blue shingle wrapper and the turkey feathers. That is the nature of these short woodland adventures.

After a long, hard winter I look forward to hunting shed antlers, if for no other reason than to just get reacquainted with the North-Forty. It was cold that morning, about eighteen degrees when I started out. I stretched the allotted hour into two and still made it back home in time for a special session of my Online Anishinaabemowin webinar. But I made it out, and that was a great victory!

The transition from winter to spring carries mixed blessings. Turkey season is not that far off, and there is still work left over from winter. Thus, the search for sheds will continue in the midst of wrapping up winter projects, time permitting.

Circumstances beyond my control took up the greater share of February. A colder-than-normal March kept me from the North-Forty more than I like, leaving me with a general feeling that my time is not my own right now. This week’s cold rains and sloppy mud did little to help matters. But again, this is the way of the forest. 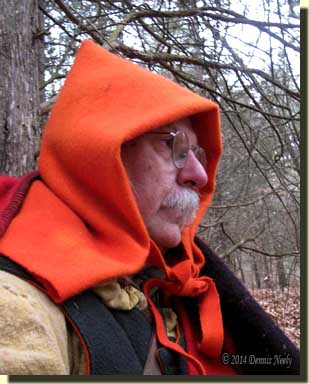 In times like these, I find it best to stop, sit with my back against a stout oak tree, take a deep breath and count my blessings. With interruptions, I got a hand-sized patch sewn on the trading-post-hunter’s knee breeches. It took four range sessions, but I made some new discoveries when I experimented with the buck and ball loads.

In late December I started hunting with a wool Ojibwe-style hood, even though I ripped the stitching out, cut it down, then re-sewed it four times. The stated size of an existing museum example did now allow sufficient peripheral vision to suit my hunting style. Now I just need to add the beads around the face opening and two rows of ribbon. For me, projects like the Ojibwe hood are spread over many sittings, an hour here and an hour there.

I’ve yet to fire the 2-band Enfield Musketoon, but I cast some round balls, a few “wad cutters” and an equal amount of Minie balls on the only “warm” afternoon in February. Another day I got them weighed and sorted, and then two weeks later I experimented with a forty-year-old formula for skirt lubricant. I have the initial powder charges researched and targets printed. I just need the rain to stop and find an hour…

I lost some red cedar trees this winter, victims of the power pole replacement project. Several are large enough to supply logs for the lean-to station camp project. The trade ax is sharp and the tomahawk ready to start “limbing.” I just can’t get to them because of the mud. My shoulders and back are the governing factors on that task—an hour is about all they will take.

Oh, and I need to find time to make flashcards to help Msko-waagosh learn a few rudimentary words of Anishinaabemowin—but that is a topic best addressed with another posting. As I sat against the oak, surrounded by a foggy mist, I thought through the little victories. I have accomplished a lot since last fall, despite all the setbacks.

Traditional black powder hunting is not all about chases and simple pursuits, rather, this pastime centers on enjoying the entire living history experience from researching, to reproducing, to hands-on experimenting in the wilderness classroom. To be fair, I am my own worst enemy, because I shift priorities mid-project, or as a crisis arises, instead of finishing one task and then starting the next.

A good example is the Musketoon. After three years I am just starting to get a sense of who Msko-waagosh really is, and I don’t need any intrusions slowing the learning process. Plus I’ve come to the conclusion that the Red Fox needs a Northwest gun that is his alone, which will take a passel of hours to complete.

But after thirty years of dreaming, the opportunity to purchase the Civil War rifle presented itself and I acted. In looking back over the winter, about a quarter of the hours were spent on researching the new musket and making the necessary preparations to shoot the rifle, weather permitting. And of course I have to go hunting with it in a traditional manner, which will require a basic set of 1870s era Michigan settler’s duds…

Well an hour just opened up in this afternoon’s schedule. The rain started pattering on the window so it looks like I won’t make it out shed hunting today. But not to worry, I have a workbench that needs attention—I began clearing it off two weekends ago, or was it three??

Find an hour here and there, be safe and may God bless you.

2 Responses to Bits and Pieces, Here and There