Pines and oaks extended south into the alfalfa field. The top of a weathered cedar corner post poked through the scrub oaks, willows and raspberry tangles. A few paces south the doe trail entered the thicket, just as the settler pointed out. Here and there rusted strands of barbed wire rose from the matted grasses to a grayed cedar post, then drooped again, appearing useless yet still testifying to the property boundary.

Elk moccasins whispered along the trail as branches, twigs and sharp, purple switches tugged at buckskin leggins and a faded-green hunting shirt. Partway up the rise a young red oak tree angled out over the edge of the alfalfa. Only tawny-colored grass encircled its trunk creating an acceptable fort for ambushing wild turkeys.

When the doe trail wandered even with that oak, the would-be trading post hunter left the trail and tore through the thicket with caution. At the tree, the woodsman surveyed the calf-deep alfalfa, then sat cross-legged on the ground, a step east and a bit north of the trunk, enough so that the tree blocked any view of his deathly shape from the west. He faced somewhat west so that he did not have to twist his body to shoot due south.

The Northwest gun rested upon a raised knee. The frizzen opened and closed a half dozen times as I checked the precious prime every five minutes of so. I forced myself to abandon this nervous habit for a good ten, maybe fifteen minutes. Then the first soft “cluck” struck my ears. 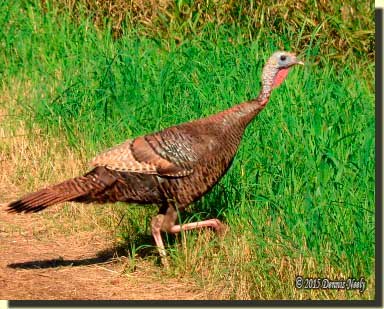 Through a space in the grass, the sun reflected off a bronze-feathered back. The sharp English flint slowly came to attention. One last time, my right thumb and forefinger pressed the frizzen forward, then eased it back. The Northwest gun’s muzzle crept upward. I remember noticing the scent of blooming alfalfa on the afternoon’s gentle breeze.

In a moment, two young wild turkeys pecked their way into sight. More followed, with a bigger hen interspersed here and there, but the birds advanced too close together for a clean shot at one head only. My breathing grew ragged. Arteries pulsed.

The flock, some thirty birds in all, was straight out from the tree when it began to spread apart. The younger birds gave one large bodied hen, foraging tail-on twenty paces distant, a wider berth. The turtle sight perched just above where her neck met her body. I waited for that gray-headed prize to stand upright one last time. “A clean kill, or a clean miss. Your will, O Lord,” I prayed in silence.

The moment of truth arrived. The hen stood upright, facing away. The turtle sight clung to the back of that gray head. As I sometimes do, I felt the sear move in the tumbler’s full-cock notch, but I wanted to unleash the death bees when the turkey’s head was broadside, increasing the probability of a clean kill.

The gray head turned. The turtle sight clutched the brown eye. And then I saw the yellow kernel of corn in the hen’s beak. My trigger finger eased. My breathing settled. The veins in my neck stopped throbbing in time with my heart beats. My eyes glanced from bird to bird. Far out, a young hen dropped a golden nugget. There were more, many more…

Be Careful Where and With Whom You Hunt…

I was lucky and drew a permit, and a trusted fellow hunter arranged permission for me to hunt on a friend of his’ modest farm. I called the landowner ahead of my hunt dates, thanked him and introduced him to the theory behind my addictive passion, traditional black powder hunting. He assured me there were too many wild turkeys on his farm. They were destroying his crops and he wanted them thinned out. He was more than happy to extend hunting privileges to me.

Upon arrival that afternoon, the landowner walked me outback and motioned in the direction of his property lines. He told me my “best chance” was where the neighbor’s woods extended into the alfalfa field, and suggested I sit in his deer blind at the corner of the field/woods. I politely declined and stated that I wished to use the natural cover of the woods. He suggested I follow the doe trail and then he said the flock “goes along the north edge of the field and right past the deer blind.” 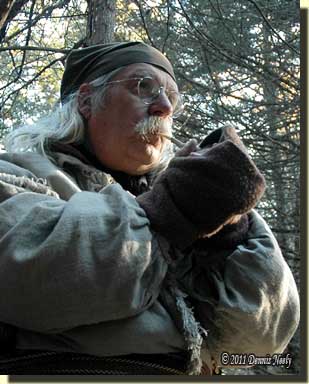 When I grew up, baiting of any kind was a poacher’s deception. I remember finding someone’s cut apples on the cross brace of an end post back near the River Raisin’s bottoms. When I told my dad he was livid. We went back before school the next morning and “cleaned up” the entire area. With that upbringing I have never used bait to take wild game. Times and attitudes have changed, and I want to make it clear that I am not passing judgement on anyone who follows the current game laws. I am just saying I prefer the challenge of approaching my game one on one.

Baiting wild turkeys, then and now, was and is illegal. But that didn’t stop this landowner, and it was obvious after the fact that he “salted the field,” as my dad used to say, daily. When I saw that first kernel of corn, I slowly pushed the frizzen up, and when the hen dropped her head I rolled the Northwest gun to the right, dumping my prime. As a side note, my trade gun didn’t have a name on that afternoon—it earned “Old Turkey Feathers” two days later in the last hour of my hunt on another farm.

A couple of the younger birds started “putting” with the movement, but the abundance of corn overshadowed due care and caution. And they were rewarded for staying the course, because the death bees remained in the smoothbore’s breech. I waited to gain my feet until the last turkey herky-jerked over the rise. Every bird passed that “people box” well within the Northwest gun’s effective distance, too.

I saw the landowner sitting on his back porch. It was a pleasant, cool and sunny afternoon. I saw him get up and walk into the house after the flock passed. His mannerisms suggested he was upset, and I suppose he told his wife that the guy with the flintlock didn’t shoot.

I remember thinking through what I would say when I came to thank him for the opportunity to “hunt” his land. Fortunately for me the flock bunched back up on the first “putt,” and I think I said that I never had a clear shot at just one head. We shook hands and he invited me back, but there was no point in returning to that property.

A couple of weeks ago I shared this story with a newcomer to traditional black powder hunting. I’ve told it many times over the years, and I meant it as a warning to be careful when hunting on land that one is not familiar with, especially when the landowner “guarantees a successful hunt.”

Unfortunately, this is not the only time I have found myself in this type of situation in fifty-plus years of outdoor life. When invited to hunt someone else’s property, I ask some rather pointed questions, in a polite and respectful manner, of course. In the handful of instances, I unloaded the minute I discovered the deception and left as quickly as possible without offending the landowner.

Be careful where and with whom you hunt, be safe and may God bless you.