The big red oak on the knob beckoned. Half the tree’s leaves, brown and brittle, littered the ground. The old hickory, three trees to the west, stood barren; a golden carpet, glowing like a candle lantern in the predawn murk, encircled its rough-barked trunk. Hunt-stained elk moccasins whispered on the doe trail that curled around the end of the swale hole, straightened as it broke over a slight rise, then angled east, thirty paces upwind of that red oak.

The cautious approach progressed in the last vestiges of the cloudless night’s chill. In a man-sized space between two bramble bushes a center-seamed moccasin cleared away the crunchy skeletons of the oak’s summer glory. Round, red berries, plump and full and glossy, lined the brambles’ spiny branches. The scent of fresh-scraped earth soon filled the air, mixing with the tannic acidity of rotting duff. 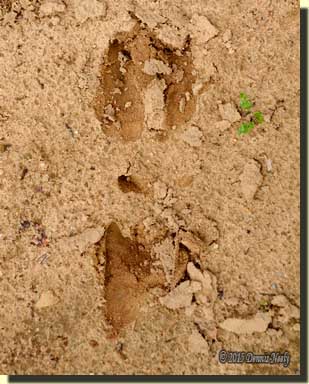 The wool blanket roll thumped down in the hollowed-out nest. I took a seat upon the scarlet bundle, crossed my leather-clad legs and rested the Northwest gun on my thighs. It was mid-November, in the Year of our Lord, 1792. Every third day a fine buck deer traveled that trail, east to west. His deep track in a patch of sand betrayed the forest tenant’s woodland habits.

A while after first light, seven deer emerged from a swampy thicket, passed between the two wild apple trees in the grassy clearing, then walked into the east side of the woods, following the doe trail. The last doe in the strung-out line appeared skittish. Her head remained up with her ears constantly in motion. She glanced at the back trail once or twice, but concentrated on peering into the hardwoods.

In due time, the morning sun warmed the thirty-acre woodlot, and not long after, I counted nine squirrels, five fox and four grays, romping about. Late in the morning, three muzzle blasts interrupted the song birds’ joyous melodies. A small flock of crows stopped cawing. I lost sight of most of the squirrels. The brass lead-holder scribbled on a folded page: “An ominous volley of three shots. Sounds like a British patrol close by. A woodsman must be careful.”

A large-bodied doe and two yearlings loped by, not running, but not walking either. Not long after, a first-year six-point buck sniffed the trail, which I consider a fortunate happenstance. I sat an hour longer than I should have, basking in the sunlight on that pleasant 18th-century Saturday. The buck of my desires never ventured by, perhaps scared off by the British patrol—or worse, providing fresh venison at their evening camp.

When the wind shifted a bit, I stood, stretched and returned to the sandy patch in the doe trail. My elk moccasin smoothed out the tracks, erasing all evidence of the morning’s wilderness travelers. Satisfied, I struck off to the west and spent the better part of the afternoon engaged in a slow still hunt. With an hour of daylight left and a favorable wind, I returned to the big red oak. The sand patch held six sets of doe tracks, but not a one from a buck. I smoothed the trail again when I left at dusk, hoping the buck I sought might pass in the night.

An oak split, dropped on the evening fire, popped and crackled as it started to burn. Yellow embers floated upward in the cool night air, bent on joining the sparkling stars above. Seven traditional black powder hunters sat around that fire, each telling tales of great bucks, and more to the point, missed opportunities. Tents of various styles and weather dotted the clearing in the pines. To the historical spectator, the scene fit Joseph Doddridge’s oft quoted passage:

“…he bent his course towards his camp; when arrived there he kindled up his fire, and together with his fellow hunter cooked his supper. The supper finished, the adventures of the day furnished the tales for the evening…” (Doddridge, 101)

“A neighbor to the south killed that fine 10-pointer,” I said, finishing up a deer hunting story from the prior November. Nods, grimaces and the pursing of lips followed, along with the usual one or two word utterances typical of veteran hunters who have walked that path one too many times.

“His neighbor shot the deer,” was the quick response of another.

“No, explain why you smoothed out the sand, please…”

I don’t know when I first engaged in this woodland habit, early on in my quest for a taste of everyday life in the 1790s, I suppose. The question caught me by surprise. It forced me to think before I responded, because I smooth off certain sandy patches, like the one in the story, without conscious thought. Their use is an integral part of any stalk, still-hunt or ramble in my 18th-century Eden. The practice is akin to moderns posting trail cameras.

The North-Forty’s soil is a sandy-loam. Heavy rains wash the yellowish sand into the bare spots in the deer trails, slurries it to the surface in old scrapes or deposits it in a low-lying wagon rut. For me, these sandy patches, and/or any area of barren earth, bear witness to the comings and goings of the forest tenants.

If a woodsman sees a white-tailed deer or a wild turkey standing in a particular location, he or she knows an exact time of that critter’s existence in that specific place. On the other hand, tracks in the sand are an after-the-fact record, subject to interpretation and speculation, but still proof of passage. Such interpretation and speculation is the essence of woodscraft.

Some sandy patches are useless, because they exist in untraveled locations; others offer a wealth of information that helps tip the scales ever so slightly in the hunter’s favor. The first task is learning to distinguish the difference, taking into account that sometimes a plot’s importance is subject to seasonal movements or travel patterns. A year’s worth of careful observation is often required.

Game tracks tell the direction of travel, number and type of critters that passed, the relative size of each, and in some instances, indicate the owner’s sex and possible age. A brisk shower, an overnight rain, impressions left in an old moccasin print, dead twigs and leaves strewn on the sand by a stiff wind, and the degradation of the imprint’s edges all contribute to narrowing the time of passage. 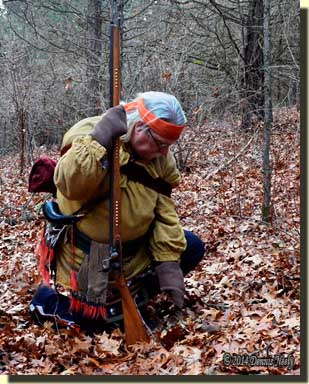 When the oak leaves fall, a woodsman must clear away the trail if he or she hopes to detect the passage of wild game.

But tracks can also be deceptive, looking fresh when they are days or weeks old. This is where smoothing out the sand plays a valuable role in establishing movement patterns. If a woodsman erases the evidence, or wipes the slate clean so to speak, he or she establishes a point certain in time.

On that day, it was a little after noon when I smoothed the sand. If, when I returned late in the afternoon, the buck’s track marked the earth, I would have narrowed his wanderings to the four-hour interval while I was still-hunting, but he did not, or if he did, he did not follow that trail. Likewise, by smoothing the sand when I left the glade at dark, I created another known benchmark.

Physical peculiarities, gained through past study, also aid in sorting out which animal or bird ventured by. For example, in late September of 1792, I saw that buck walk along the edge of a cornfield. I waited until he was gone, then stalked the field and spent a long time analyzing his tracks. If I recall, he was the buck with no dew claws on his right front leg. His toes on that leg spread an inch wider than normal, which set his hoof prints apart from those of other, like-sized bucks. Knowing that made his track easier to recognize—if the right front hoof had dew claws, it wasn’t the deer I was after.

Once learned, a woodscraft skill becomes second nature, performed with little conscious thought, and that is why I was so surprised at the question. I adhere to the woodland practice of erasing the evidence, but never think about it. Thus the thought never occurred to me that other traditional hunters might not know of it. And then I start wondering what woodland skills my hunter heroes applied to their simple pursuits that they never thought about writing down…

4 Responses to Erasing All Evidence…