There is Always One… 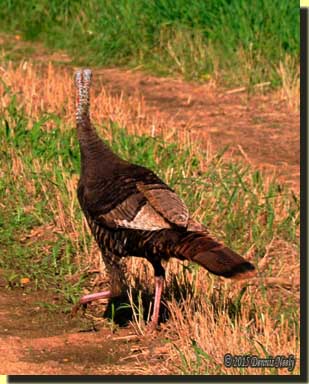 Bright sunlight shone on bronze feathers. The wild turkey hen had nary an inkling that supposed danger lurked so near. She stood upright and in full view at the edge of a sandy rut. The deep prairie grass, up the hill and to the northwest, occupied her gaze. Behind her, twenty-five paces down the wagon trail, a backcountry woodsman eased undetected around the long, sweeping bend.

The Northwest gun harbored no death bees. The cock was down, the frizzen up, yet stealth leaped to the forefront. Surprised by the fortunate happenstance, the woodsman stepped off the trail and sought refuge within the boughs of a broad-spreading red cedar tree, content to watch and learn and enjoy. With that simple discovery, the wilderness classroom came to order on a cool July morn, in the Year of our Lord, 1796.

Purple legs moved with great caution. The bronze beauty’s grey head turned; the bird’s brown eye scanned the back trail, but found little to be concerned with. “Putt,” the bird uttered in an almost imperceptible tone. “Putt.” Within a minute the first poult emerged from the prairie grass. Others followed, some walking straight for the hen, some pecking at the ground.

The hen turned to her right as the young birds gathered in the wagon rut opposite where she stood. Her head jerked, then her neck stretched high as her feet shifted her body broadside. It seemed clear that she detected a movement that did not belong, or perhaps saw a red-dyed deer-hair cone dangling in the gentle breeze. Whatever the cause, the next putts bore a distinct crispness.

Her demeanor changed in an instant. Her posture became rigid and she placed each foot with a calculated exactness that left little doubt she was unhappy. A half dozen steps later she was in the tall grass, but now the poults were in the open, heads up, eyes snapping about as each tried to discern the reason for the hen’s displeasure.

In the deep shadows cast by several large cedar trees, the once shimmering bronze body moved away from the wagon trail. The poults stood their ground as if afraid to follow. Then the same soft “putt” that first beckoned the youngsters from the prairie grass could be heard from a dozen paces off the trail. Two or three of the brown, mottled offspring started for the grass. Two or three others headed in the opposite direction, back into the prairie grass. The hen putted louder.

Head down, a dark body herky-jerked in the shadows. In a matter of moments, the hen’s gray head popped up about two paces off the closest rut. She putted again, and this time the poults obeyed, forming a single-file line that spanned the two sandy ruts and began snaking its way into the grass and the safety of the cedar trees’ darkened sanctuary.

But as always seems the case, there was one straggler, at least two hunter paces behind. The woodsman chuckled, then whispered, “There’s always one..”

Children of the Forest

This 18th-century scenario plays out, in a variety of versions, many times over the course of the summer months. July is always a delight, because the woodland youngsters start exploring and expanding the boundaries of their new world. For these children of the forest, some days begin with a casual introduction to the farm truck, others might include a rumbling tractor with a whirring mower and once in a while these novice wilderness tenants don’t realize a 1790s time traveler lurks in the boughs of an old cedar or sits in the shade of a shagbark hickory tree.

On warm sunny mornings, baby squirrels, pint-sized rabbits, fledgling robins, fluffy ducklings, fuzzy goslings, ugly signets or half-sized copies of Sandhill cranes make cameo appearances in the midst of my history-based excursions. To be truthful, I reap the greatest joy from observing the spotted fawns and mottled-brown wild turkey chicks. I could sit for hours, watching, learning and soaking in the wilderness wisdom that leaves one with a sense of invigoration for this wonderful pastime we call traditional black powder hunting.

The other evening, Tami and I happened upon a hen and her brood. The hen putted with a steady cadence, clearly giving instructions, but the youngsters milled about in the short grass as if deaf to mother’s teachings. Perhaps she was the same hen I happened upon that morning in 1796, because she returned to the clearing, putting with a sterner voice. Most of the youngsters followed her into the deep grass, but there was one that tarried, displaying a noticeable obstinate streak. “There is always one child that doesn’t listen to mother,” Tami said. We both laughed.

On a couple of occasions we have walked or driven by a brood hidden in the brush. The usual response is for the young tenants to take wing and seek safety in a tree close by. But in thinking about Tami’s observation, there are always one or two siblings that sit tight and don’t fly up until after the mother hen does, or they walk off straggling far behind her. Perhaps there is a universal truth of child rearing woven in the fabric of such occurrences?

Yesterday, I eased around the last cedar before the meadow. Eight white-tailed deer, seven does of varying size and one modest buck in velvet, occupied the knoll in the middle of the meadow. The buck and five does were bedded. The deer appeared contented and unconcerned as they basked in the bright sunlight. I chose to watch, as I most often do.

Long ago I learned not to concentrate on one creature or a group without giving equal attention to the entire area, including my back trail. As my eyes scanned the dew-laden grass, I caught movement straight ahead, first two alert ears, then two more. The coyote pups hid behind a tangle of tall grass the size of two bales of trade blankets. 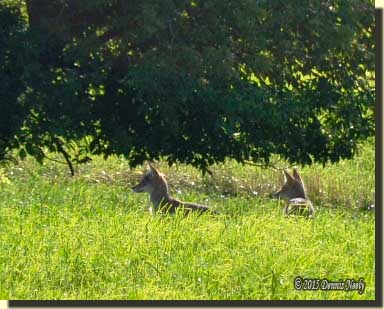 At first I thought the two young canines were hunting mice, but their attention wasn’t focused on the grass, but rather on the deer. A big doe, standing to the right and slightly ahead of the buck leered at the pups as if to say, “How dare you stalk us.” And in response, the young coyotes made no attempt to advance.

I stepped sideways to gain a better look at the coyotes, and when I did one of the bedded does spotted the subtle movement. She scrambled to her feet and stared at the large cedar tree, hacking away at the boughs that no longer served as pickets in an impenetrable fort. Three other does stood up and aligned their bodies, ears and eyes to the meadow’s southwest corner.

The coyotes took a clue from the alarmed deer and concentrated on the wagon trail and the open field’s west-edge cover. There was nothing I could do but stand my ground and remain motionless.

Two of the does turned around and started walking toward the hardwoods, which roused the buck from his morning rest. The closest coyote loped to the south and into the security of the first row of corn. The other bounded twice as if following, then it halted with an abrupt, stiff-legged stance. It glanced at its sibling, then spun around to face the skittish deer. After a longing look, the pup circled to its left and trotted to the corn, but did not enter. Instead, it turned back to the deer and took three steps in their direction. “There is always one,” I whispered with a smile.