“Old Turkey Feathers” held no charge. With hammer down and frizzen up, the Northwest trade gun’s tarnished-brass butt plate squished into the soft, wet sand. Msko-waagosh, “the Red Fox,” settled to his haunches, using the smoothbore’s forestock more as a supportive stick than an instrument of death. Before him, at the river’s edge, the once native captive unraveled multiple sets of deer tracks mixed with those of squirrels and a wandering raccoon.

On that pleasant June morning, in the Year of our Lord, 1796, the woodland tenant who refused to give up the old ways of his adoptive Ojibwe family glanced over his shoulder at his frontier wife as she checked a gravel patch, a dozen paces upstream. Her chiefs-grade trade gun, “the Silver Cross,” held no charge as well. “Just does, a fawn and a squirrel here,” she said in a hushed tone.

Not long before, the couple ventured around a slight bend in the Pigeon River and happened upon a gurgling rapids. Just below the rocky shoal the pair paused at a shallow crossing. Small round river stones, covered with a light coating of green moss, lined the bottom as the cold, clear water flowed on into the wilderness. The backcountry husband and wife sought elk sign that day.

Finding not a trace, Msko-waagosh rose to his feet, stepped back and sat in the grass. He pulled off his elk moccasins, untied his beaded leg ties and removed his blue wool leggins. “I will check the other bank,” he said as he got to his feet. After folding his moccasins and leg ties inside the leggins, he walked to the river and began to cross, taking great care to watch each step on the slippery rocks.

The current pushed against his lower legs. The cold water numbed his ankles as he clutched the wool bundle close to his body. On the far side, he set his garments on a rock and searched the shore barefoot. “There is nothing here, either,” he said, “and the trail is denser over here.”

Once back on the west bank, the woodsman walked beyond the gravel, sat and dried his legs with handfuls of short, green grass. The dark wool leggins warmed his legs as he pulled on his moccasins and scrambled to his feet. “It’s time to move on,” Msko-waagosh said.

On Friday night, the Gaylord Area Convention and Tourism Bureau provided a “Welcome Reception,” which highlighted the organization’s “All Outdoors!” tourist initiative. Saturday is a designated workday for the outdoor communicators with an official activity list that features a sampling of the host city’s many attractions, natural resources and/or recreational opportunities. Some writers strike off on their own adventures, which is what Tami and I did.

We chose a traditional black powder hunting scout in the Pigeon River State Forest area at Vanderbilt, north of Gaylord. The historical scenario for that sojourn was to scout for elk along the Pigeon River with hopes of sighting one or more within an 18th-century wilderness context.

A couple of weeks before the conference, I spoke with Rick McDonald, a Michigan Department of Natural Resources Forest Technician who works out of the visitor headquarters building. We discussed our intent to make sure the scout complied with all game regulations. I had specific concerns about carrying the smoothbores, but as long as they were unloaded, there wasn’t an issue. As an added consideration, we removed all round balls and shot from our pouches and our horns held no black powder.

Beyond looking for elk signs, we entered our 1790s Eden with minimal expectations. The weather was gorgeous and the bugs restrained themselves. We found the Pigeon River with little trouble and at one point we watched a doe on the far bank while a red-tailed hawk circled overhead and a close-by poplar’s leaves rattled in a gentle breeze.

As we moved downriver, we found it necessary to skirt a couple of modern campsites, and then we came upon the tiny rapids and the river crossing. The discovery was not without 21-century distractions, but by facing north the intrusions disappeared in our ancient world. Despite the cold water, I found myself compelled to attempt a stream crossing in true period-correct fashion. 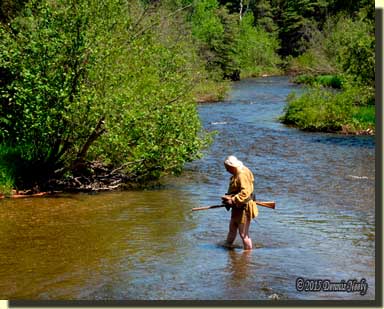 Elk moccasins, buckskin or wool leggins and water come together at the strangest times in the wilderness classroom, yet they pop up with surprising regularity, often providing a fresh, 18th-century learning experience and with a little luck, a pristine moment. Over the decades, I have learned the circumstances surrounding such woodland lessons dictate the best response, sometimes casual and sometimes urgent. On that June morning, the former was the case.

John Tanner addressed the rigorous rules followed by the young warriors during their initiation while with a war party. In the midst of his lengthy explanation, he spoke of dealing with water:

“…They must, if possible, avoid wetting their feet, but if they are ever compelled to wade through a swamp, or to cross a stream, they must keep their clothes dry, and whip their legs with bushes or grass when they come out of the water…” (Tanner, 109)

Tanner’s words formed the lesson plan that morning, right down to using grass to dry my legs. There was no urgency to the crossing; plenty of time existed to strip down, fold the clothes and carry them across the shallows. The learning came with mentally overcoming the numb ankles, working with the stiff current and placing each foot with care on the slippery rocks. A sudden slip, a loss of balance and a broken leg in the middle of the fording would have changed the entire complexion of that outdoor laboratory experiment.

Jonathan Alder spoke of following a similar regimen when crossing the Ohio River, a much wider and deeper adventure than the Pigeon was:

“…we went up on the bank and peeled an elm, and made a bark canoe. We all put our blankets and guns and clothes in it and one Indian tied a piece of bark to one end of the canoe and put the other end round his neck and struck out for the other side. We all plunged in one after another, so as not to swim in a huddle for fear of getting entangled with each other…” (Alder, 84)

Likewise, my trading post hunter persona always turned to Meshach Browning for advice on dealing with water in cold weather.

“On the morning when the first snow fell, I rose early, intending to hunt on the west side of the Great Yough. river. I went to the river, which, being pretty well up, the water reached about half-way up my thigh. I took off my pants and moccasins, waded over, and after again putting on my clothes, I felt first-rate…” (Browning, 250)

In both instances, the trading post hunter and Msko-waagosh, the returned captive, avoid getting wet feet while engaged in a simple pursuit. Knowing the North-Forty as I do, there are ample places to cross swamps with a minimal chance of getting damped or soaked. And there is always the choice of “walking around” a potential water hazard—again in adherence to John Tanner’s young warrior comments.

In Michigan, weather conditions exercise a tremendous influence over a living historian’s encounter with water. Although the air that June morning was warm and pleasant, the Pigeon River ran cold and harsh, numbing my ankles before I reached the halfway point of the crossing. In August or early September, the water temperature would not be an issue, but by late September the river’s flow would cool again.

For some reason, I always remember the cold-weather dunkings. Perhaps that is because I’ve never fallen through the ice in mid-August. When a traditional woodsman hears that stomach-wrenching first crack, and I seem to be a magnet for such happenings, the circumstance affords little time to think, much less sit on the bank and strip off warm clothing.

A number of years ago, while on a bobcat hunt, I slipped on a snow-covered log as I crossed a much smaller stream that still ran open. The temperature that afternoon struggled to reach ten degrees above zero. Balanced on a tiptoe, the icy water came to mid-calf. Only a trifling amount got past my moccasin tops, which were tied snug. The frigid jolt of seeping water was period-correct, and the blanket-wool liners performed in a 1790s manner as well, wicking the moisture away from my skin and nullifying the mishap.

Charles Johnston, taken captive in 1790 by Shawnee warriors, told a similar tale. In a few brief sentences, I shared a feeling of kinship with a woodsman I will never meet, never knew:

“…we came to a creek. A log lay over it, five or six feet above the surface, connecting one bank with the other. We began to walk across this. The greasy moccasins I wore were so slippery that I tumbled into the stream. Luckily, it was no deeper than my waist and I had no difficulty getting to the other side. The savages are so well known for their sternness that we are ready to suppose they are entire strangers to mirth. But any happening like this never failed to draw loud, repeated bursts of merriment from them.

“I had never experienced trials and hardships such as those I was now undergoing. Still, my health was not injured by wading creeks, falling into the water, sleeping in the open air in all kinds of weather, or by any of the other inconveniences I encountered on this long, painful march, the first of its kind I had ever made.” (Drimmer, 200)

And therein resides the elusive mystique that draws one to engage in a traditional black powder hunt or scout: to experience the texture of life, as close as possible, in a bygone era. There was, it seems, no other choice but to ford the Pigeon River…

Keep your toes dry, be safe and may God bless you.

2 Responses to Fording the Pigeon River