A moccasin weaseled under brittle oak leaves. Slow and deliberate, the other toed a mossy patch. A long gaze spied nothing of importance. A perched blue jay cocked his tufted crown, but held his tongue. Down the slope, in a tangle of raspberry switches that ensnared an old treetop, a chipmunk chirped, then skittered along the upper limb with its tail straight up. After another glance about, weight shifted and the right moccasin advanced, then the left. The next pause, and the few after that, produced similar results. 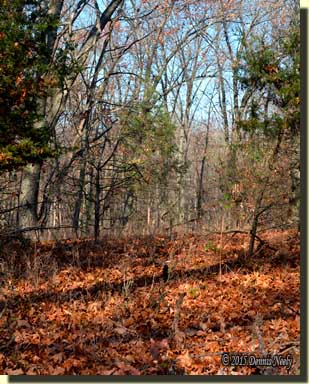 That morning, in the Year of our Lord, 1795, a cautious still-hunt angled uphill on the sunny east slope of the hog-back ridge. An hour spent sitting quiet and scribbling musings on a folded journal page enticed neither fur nor feather close. Sequestered in a windfall, thoughts of wandering wild turkeys wafted in and out of the abbreviated sentences.

Then, across the big swamp, high up on the far wooded hill, three muffled clucks drew four more. The folded page and the brass lead holder slipped into the Ojibwe split pouch. With a roll, a push and a deep-gut sigh, I got to my feet, stretched and struck off on a still-hunt in search of that flock, or perhaps a single bird or two.

In due time my moccasins passed over a gentle knoll and struck upon a doe trail that led through a tunnel in a tight-growing cluster of red cedar trees. Deep in the shadows, almost to the far end, I knelt and surveyed the forest floor. From this vantage point I could see from the edge of the big swamp to the hill’s crest and well down the ridge’s steep eastern slope. In late November the white-tailed deer do the same, they stop within this humble fortress and watch ahead.

Eighty paces distant a fox squirrel dug in the brown, brittle leaves. Even with bad ears I heard it before I saw it. Beyond, a gray squirrel bounded along a limb, halfway up one of the hickories, where the sedge grass stops and the high ground begins. Somewhere over the crest a fox squirrel chattered, teasing, daring, taunting…

“Turkeys, we’ll stay on turkeys,” I whispered as I tried to convince myself not to abandon the pursuit of succulent fowls.

Two or three pauses into the warm sunlight, a plump fox squirrel jumped from an oak, rolled in the leaves and then started running straight at me. Startled by the commotion, I swung the Northwest gun’s muzzle to the left. The squirrel halted, stood upright, then scampered back to the safety of the keg-sized trunk. It spiraled around back, but in a couple dozen seconds appeared on a dead, barkless branch just above a few young cedar trees.

Two steps to the right, I knelt, rolled to my hips and sat with my back against a cedar tree. I rested “Old Turkey Feathers” across my lap and started reaching inside my black and red, floral-pattern trade shirt for a silk scarf. The squirrel watched as I slowly rolled the orange scarf and tied it about my head. The decision was made.

I reckoned the oak’s trunk was thirty-five paces away. The squirrel needed to be ten paces closer. “Fifteen steps would be ideal,” I thought as my mind shifted to squirrel hunting. Yet, my eyes spent more time scanning the hillside than keeping track of the squirrel. A passel of minutes passed. The squirrel fidgeted, flipped its tail and then circled around the oak. “A clean kill, or a clean miss. Your will, O Lord,” I whispered as my thumb fiddled with the cock’s jaw screw.

As regular readers, some of you know that one of my favorite history-based hunting tales involves John Tanner: the time he changed his load, changed it back and then blew his gun up trying to kill a bear. Tanner’s hunting camp that spring was a day’s journey from the trading post…

“I killed by myself twenty otters, besides a good many beavers and other animals,” he wrote. (Tanner, 60)

“…taking the ball out of my gun, I put in some shot, and began to creep up to them…” (Ibid)

In essence, when the opportunity presented itself, Tanner adjusted his plan to match the game at hand—from checking his traps to stalking wild ducks on a pond. But as he progressed, he discovered an even better “end-cap special” in his local woodland grocery store…

“As I was crawling cautiously through the bushes, a bear started up near me, and ran into a white pine tree almost over my head. I hastily threw a ball into my gun and fired, but the gun burst about midway of the barrel, and all the upper half of it was carried away. The bear was apparently untouched, but he ran up higher into the tree. I loaded what was left of my gun, and taking aim the second time, brought him to the ground.” (Ibid)

For me, these few sentences hold so many classroom lessons, some are “never dos” that make one shudder, but the positives are a major reason why I often quote this particular passage. Like Tanner, I took advantage of the game at hand on that pleasant Monday morning—I switched from hunting wild turkeys to putting a squirrel in the pot.

A part of that success is due to being prepared while in the glade. Not necessarily prepared in an 18th-century sense, but rather as a 21st-century living historian crossing time’s threshold ready to minimize the modern world’s intrusion into my 1790s scenario.

As I sat against that meager cedar tree, I never gave the orange silk scarf a second thought. A hunter orange head covering is a standard, tag-along item for my alter ego on most turkey chases. Now and again it gets left home or on a tent pole in camp, but most times, either spring or fall, I carry one.

This practice is not grounded in primary documentation, but rather represents a small dose of measured compromise with regard to modern hunting rules and regulations. The intrusion is minor and limited to the few seconds it takes to roll the scarf and tie it. Since embarking on the returned Native captive persona, two wraps around my head and the transgression disappears from conscious thought.

The hand-dyed silk scarf is new to me, purchased from Mary Brandenburg last March. Before I bought the scarf, I used a cotton head cloth, which I must admit took up valuable space inside my shirt or hunting pouch. Unlike the old cloth, the silk scarf compresses thin and does not leave a noticeable bulge. I even don hunter orange when I walk out after taking a turkey; years ago I read of a camo-clad hunter who was wounded carrying his spring bird out of the woods.

But in the fall, there are circumstances, like that morning, when I want to adapt to the forest’s offering. I can’t begin to count the number of hunts where such a switch took place—both ways, hunter orange on or hunter orange off. With each circumstance, safety has always been the first concern; there are some locations on the North-Forty, mostly along property lines, where I would not think of removing an article of hunter orange clothing. I would never follow this practice on public land or upon an unfamiliar plot. On that morn, I saw no danger… 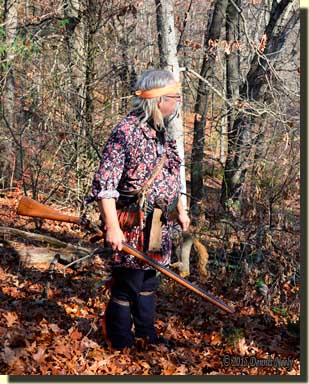 The fox squirrel jumped to a nearby cedar tree. It held fast and peered at my cedar. In a dozen shallow breaths, it climbed out on an opposite twig, hopped into the next cedar, then spiraled earthward. Once on the ground, it took deliberate bounds downhill. Working the trigger with my index finger, I felt the sear drop into the tumbler’s full-cock notch.

During the wait, a modest autumn olive with yellow and green fish-shaped leaves came to signify an appropriate distance for unleashing the death bees. The squirrel paused behind that marker, out of my sight. The Northwest gun rose to my shoulder. My left elbow rested on my left knee, pulled up a few minutes before when the squirrel slipped to the back of the oak. Two hops later the smoothbore belched fire and a mighty roar: “Kla-whoosh-BOOM!”

Leaves flew. Autumn olive twigs fluttered. White smoke shrouded the fox squirrel. I rushed to my feet, but saw the forest tenant’s lifeless form. Before reloading, I knelt and offered a prayer of thanksgiving, not only for the blessing of the fox squirrel, but also for making a prudent choice.