“Perhaps there is a chance…”

Stillness prevailed. Half visible to the west, the evening sun blazed orange with an outer aura of lavender. A fox squirrel chattered where the hardwood hills descend to the young maples, then blend with the River Raisin’s muddy bottomlands. The acrid scent of falling oak leaves hung in the quiet solitude of that day, in the Year of our Lord, 1796. 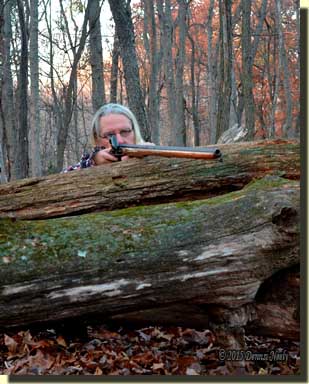 “Arrkk.” A hushed cluck caused a wary woodsman to turn about slow and roll up on his wool-clad knees. The Northwest gun’s muzzle crept over the bark-less, uppermost limb of a tangle of three treetops, downed one at a time in succeeding summers, decades ago. The sharp, English flint snapped to attention. The turtle sight waited with anxious anticipation as a discerning eye watched over the back flats of the trade gun’s browned barrel.

In a minute or so the dark shape of a lone hen turkey moved among the oaks, maples and hickories on a far knob. The bird chose an erratic course. At a prominent white oak the fowl’s direction changed as it began to circle toward the treetop fortress. “Perhaps there is a chance,” the returned Native captive whispered.

Alas, a couple dozen turkey steps closer the hen again paused, looked about and struck off due west. With a finger working the trigger, the sear returned to the half-cock notch. Muscles relaxed, and breaths slowed. Turning back, the forest tenant settled down onto the blanket roll. By then, the fox squirrel ceased its chatter.

Backlit by a gorgeous orange sunset, the bushy-tailed rodent ascended an angled maple branch, climbed out on a thin twig, hesitated, then leaped to a similar twig on a close-by oak. The squirrel again hesitated, hopped along a limb, then disappeared.

With little light left, fifteen Canada geese rose up from the Raisin, creating a mighty commotion as they assembled and veered to the east. Thankful for the blessing of a peaceful afternoon jaunt, the woodsman scrambled to his feet, stretched and began walking in the same direction the geese took.

October flew by with fewer hours afield than hoped. At times it seems that the pressures of modern existence conspire against an already weary time traveler, leaving a heap of expectations unfulfilled. The bagpipes, violin and drums of “The Gael,” performed by the American Rogues and the American Air Force Symphony, even fails to assuage the disappointment.

Unfortunately, life demands choices, and right now finding the time to get to the woods overrules pounding the keyboard for a full-length blog post. A lingering stretch of outstanding weather here in Michigan doesn’t help, either. I want to be in the woods every waking moment, and that desire is unreasonable, to say the least.

Last night’s excursion fanned the passion that drives me to seek out pristine 18th-century moments. Well after dark, I realized that I never scribbled a single word in the journal. That is so not like me, but it reflects the stress of these last few weeks.

That said, my addiction dictates that I don linen and leather, strike off through time’s portal and frolic in the joyous Eden of the 1790s in the Old Northwest Territory. I can catch you all up, dear readers (as John James Audubon used to pen), when the driving rain comes or the snow flies. Perhaps there is a chance at a fine fowl this day…

One Response to “Perhaps there is a chance…”