Footfalls hugged the nameless island’s northwest edge. The sandy bump, sequestered in the midst of the River Raisin’s bottomlands, rolled tall enough that a woodsman could not see from the west bank to the east bank, yet the isle was no more than thirty paces broad. A bedroll bound with a leather portage collar eased down on the raised, moss-covered root system of a trio of yellow birch trees, twenty paces off the island. Upwind, a trail angled southwest and slightly away from that lair. 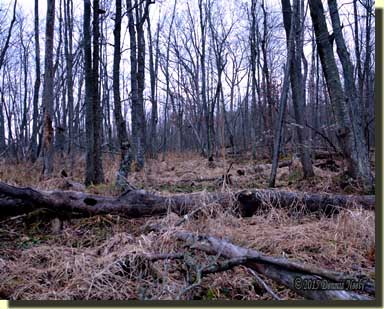 The bottoms remained quiet. The mist ceased. A gentle breeze came and went, as did a pileated woodpecker that flitted from treetop to treetop. Such solitude characterizes the waste land that flows from the hardwood forest to the cattails that border the Raisin’s banks.

In time, blue patches of clear sky broke through the foggy gray soup that hung low over the river. A rousing chorus of “Chic, a-dee, dee, dee, dees” interspersed with the chirping of two song sparrows brought hope to a slow morning.

Then the soft snap of a tiny twig tightened the grip on the Northwest gun’s slender wrist. The almost imperceptible thump of a cloven hoof upon the island’s crest sent my thumb into a fidgeting dither on the lock’s jaw screw. “Patience…patience,” I mouthed in silence as I shifted my thoughts to juice trickling from a succulent apple.

A young doe’s head came into view first. She plodded on the trail, stopping now and then to sniff the air and look upwind. She gave little mind to the downwind side of the island. A bigger doe, her mother no doubt, followed about ten paces behind. From their manner, I surmised a buck would not trail the pair. Tense muscles relaxed and I contented myself with watching and studying those passersby.

I scribbled two notes in my journal after those two does passed, the first read “Thinking of juicy apples,” and the second, “What do the deer see?” Now the first notation will only confirm my daftness, but I suppose this fits with my constant babbling on about time travel. Well, no matter…

When I first started pursuing white-tailed deer in earnest, I met Gene Wensel at an outdoor show here in Michigan. He was one of the top gurus of big buck hunting at the time, and I don’t believe that mantel has ever left his shoulders. I think part of my attraction to Mr. Wensel was his reverence for Fred Bear, another of my hunter heroes. I bought his book, Hunting Rutting Whitetails, and that autographed copy still sits in a hallowed location on my bookshelf. It’s about due for another read.

Now in the last few years, based on readers’ questions, I have come to realize that a given part of the hunting methodology that I employ as a traditional woodsman has become relegated to the subconscious netherworld. I chuckled that morning, when I realized I half-consciously shifted my thoughts to the creamy flesh of a ripe apple and the sweet juice that trickles forth in preparation for a mighty buck’s hoped for appearance. That ingrained habit is a direct result of Gene Wensel’s early influence.

“The point I’m trying to make,” Wensel writes, “is that civilized man has lost a lot of previously inborn traits, instincts and abilities over the centuries. For literally generations he has been bred to make life easier for himself. He’s relied less on the necessary means of survival, at the same time dulling his old inbred talents as a true hunter…” (Wensel, 86)

The discussion that follows in his text deals with whitetails possessing a “sixth sense” for detecting danger. But as he works toward a chapter dedicated to the hunter embracing a “positive mental attitude,” he states:

“…the biggest question is not whether this sixth sense exists, but whether we can do anything about controlling it. And even more important, whether or not we may be able to reverse these brain waves to attract rather than repel game…” (Ibid, 87)

At that time, I started thinking through all the “almosts” that dominated my hunting. I realized that in every case my mind was centered on the death of the approaching buck—super negative, anti-survival brain waves? Maybe there was something to Wensel’s ideas and maybe there wasn’t, but the notion was worth a try. That’s when I started thinking happy thoughts about succulent apples. Did your mouth water when you read about the juice or did an inner voice yell “DANGER!”?

What Do the Deer See?

In those early years, I learned to stalk deer. I didn’t know that a hunter wasn’t supposed to “put the sneak” on a whitetail. That notion ran counter to stand hunting, a sacrilege beyond redemption, I learned.

As my experience grew and stalks became more complicated, situations arose where I was in the wrong place at the right time. To remedy the location problem, I started circling from a poor location to a better one by loping along on earthen deer trails. After all, those byways were the most advantageous means of getting from one place to another. I wish I could still move with that youthful combination of stealth and agility… 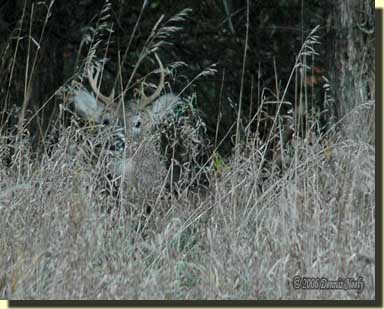 On more than one occasion I passed bedded deer that just watched and showed no signs of fear as I hustled along. Trying to improve my advantage on a nice buck, I once jogged past a nicer buck—talk about conflicts. This practice evolved from necessity in the laboratory of the wilderness classroom. Again, no one told me you weren’t supposed to leave scent on active deer trails.

Using deer trails to navigate from one place to another taught me another valuable lesson: view any stand from the perspective of the deer. Most hunters choose a stand based on the wind and the potential for a high percentage shot, yet they never consider what the deer sees when it passes along that throughway.

I would venture to say that 95 out of 100 hunters, modern and traditional, would have chosen to sit with their back against the two, powder-keg-sized white oak trees that grow from a common root on the northwest side of the nameless island. Those trees offer a comfortable spot, descent cover with a good view of the bottoms and a thirty-plus-pace shot at the trail coming from the cattails at the river—everything a hunter might hope for, taking into account that we restrict hunting to the ground on the North-Forty.

But trails go two ways. A rather rough walk from the river to the island reveals that the forked oak is a prominent tree that draws one’s attention as soon as a forest tenant breaks into the bottoms from the cattails, a hundred paces out. Likewise, approaching from the northeast, the trees’ whitish-gray bark almost glows like a lighthouse beacon; all but the lower foot of the trunks are visible, again eighty or so paces distant.

One of the advantages of still-hunting is that it gives the woodsman an ever-changing perspective of the forest or fen. And with that limited movement through the forest, the woodsman gains a better understanding of the strengths and weaknesses of a given tree top, an old cedar tree or a clump of yellow birch trees. Armed with that knowledge, a would-be 18th-century woodsman can reclaim a small portion of a lost inborn trait by recognizing what to exploit and what to avoid.

One Response to Reclaiming Inborn Traits