I Choose to Invest the Time

Two whistling swans angled southeast. A raspy hen turkey yelped in time with the swans’ whooshing wings. In the distance, a single deer, modest in size, circled the largest cedar tree on the meadow’s north edge. No others followed on that first day in November, in the Year of our Lord, 1798.

Wet soil stuck to the toe of a trail-worn, buffalo-hide moccasin. A quick, soaking rain an hour before first light softened the edges of a fine buck’s track that crossed the cornfield in haste, east to west. The Northwest gun’s tarnished brass butt plate rested on two, wide, crisscrossed corn leaves that covered the bare earth at the tip of the clean moccasin. 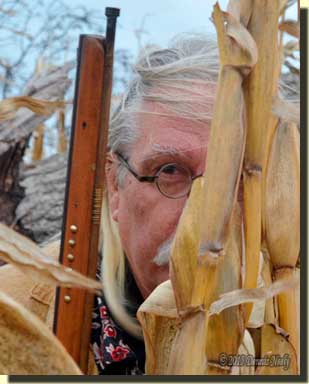 At first light, the sky remained devoid of wild Canada geese. Damp corn leaves fluttered in the gentle breeze, but made nary a sound. The air smelled fresh and clean, spring-like, with a twinge of sweetness. Orange and red clouds ushered in that morning. Three small family groups of decoys surrounded a tiny stand of corn on the crest of a hill not that far from the cornfield’s center.

Six Sandhill cranes chortled their way to the mill pond in the village. The flock disappeared behind the tree line, but came back into view where Goose Creek flows into the River Raisin. The birds seemed unsure, flapping soft and easy farther north, then turning east and finally south until they reached the point where they first became visible. Wings cupped, beaks into the wind, the six settled down in the hayfield to the west of the neighbor’s homestead.

A while later, two Sandhills approached, but in contrast to the flock of six, these birds swooped low over the cornfield, taking a good look at the imitation geese that fed near the standing corn. The pair winged slow over the cedar grove, turned and came back. The sun illuminated the red and white on the one’s head; their wings and body plumage almost glowed as they banked to land.

The sum total of excitement that morning was watching those Sandhill cranes land, seeing the whistling swans and catching the young white-tailed deer sneak around a cedar tree. An hour or so after daylight, a flock of wild turkeys walked single file through the middle of the meadow. I wondered why I wasn’t sitting beneath the dead oak. Instead, I chose to hunt geese, hidden amongst one hundred and two cornstalks. I counted, twice. But as some days go, I never heard nor saw a wild goose.

An All Too Common Conversation

“You just hunt deer with your muzzleloader, right?” I had the gentleman on speaker phone as I searched a folder looking for a telephone number.

“No, I do all my hunting with a Northwest gun, a smooth-bored flintlock. It’s the 18th-century equivalent of today’s shotgun.”

“I don’t understand, I thought muzzleloaders were just for deer hunting?”

“Here’s the phone number…” I said in response to the reason for the gentleman’s call.

Now I could have stopped there. I knew the explanation for his last question would evolve into a longer discussion. It always does. Without a second thought, I chose to invest the time.

“When I started out in traditional black powder hunting, my main motivation was to hunt deer. But I was an upland bird and small game hunter, too,” I continued. “I looked into a smoothbore, because of its versatility. I learned I could load with bird shot or a round ball. I use bismuth shot for waterfowl and buckshot for bobcats and coyotes.

“If you called me up and said, ‘Denny, do you want to come over tomorrow and hunt squirrels, or rabbits, or ducks or whatever…’ I would show up with ‘Old Turkey Feathers,’ as I call my Northwest gun; the correct projectiles, fixings and accoutrements; and dressed in the hunting clothes of the 1790s,” I said.

“Really? I love to hunt small game and sometimes ducks. I never knew you could hunt them with a muzzleloader,” he said with that inquisitive tone that typifies an “Ah, Ha” moment. The conversation continued, but I hesitate to say, “As you might expect…”

At the Woods-N-Water News Outdoor Weekend last September in Imlay City, Michigan, I had a similar conversation with a quest who turned out to be a fellow living historian. He said he re-enacts a British soldier, if I recall correctly, in the American War for Independence. The gentleman owned a reproduction Brown Bess musket, which seems to be at the center of a number of other discussions lately.

Anyway, as we talked, he told me how many “rounds” he had fired through his musket, and that number was quite respectable. Then he balked when I asked him if he hunted deer or turkey with his Brown Bess or perhaps small game.

“This summer was the first time I ever shot a round ball,” he said in a matter-of-fact way. “Not a lot, just a few, but it was a lot of fun. I’m looking forward to deer hunting in December. How do you hunt small game with a Brown Bess?” 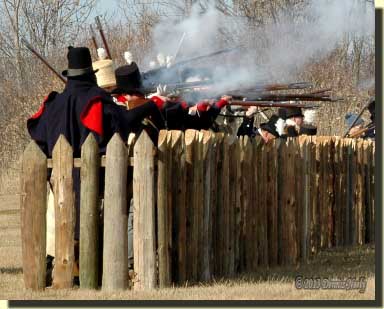 War of 1812 re-enactors at the Battle of Frenchtown.

This is the very reason I hesitate to say, “As you might expect…” Just because a person visits this site does not mean he or she is a traditional black powder hunter. This might surprise some, but to the contrary, the majority of viewers/readers do not participate in history-based pursuits; most are casual observers intrigued by the unique nature of this hobby.

In recent years I have discovered that a fair number of seasoned living historians, especially individuals who do battle re-enactments and hunt with modern arms, do not connect hunting with their front-loading musket or rifle, and fewer still consider doing so “in character.”

And I have found this to be true of many black powder shooting sports competitors, including those who favor the primitive events. This all too common conversation popped up again last evening when I spoke with a long-time rifle shooter. Our exchange was almost a word for word copy of the “You just hunt deer…” question.

From the sounds of his description, he owns a pretty decent 18th-century wardrobe, has done the research and takes pride in his longhunter impression—on the primitive range. As we talked, he sounded dumbfounded that anyone would consider bringing game to the table in period garb. He uses his percussion rifle in Michigan’s muzzleloading deer season, but wears modern hunting clothes. He had never considered taking his longhunter impression to its ultimate conclusion, and found the notion fascinating. It was obvious he had not read any of my scribblings.

On that November morning, I chose to hunt geese over turkeys with what some might consider disappointing results. Granted, if I weighed geese over squirrel hunting, I’m sure a herd of fat fox squirrels, each the size of a woodchuck, would have frolicked in the corn, just beyond Old Turkey Feathers’ effective distance. That’s just the nature of these simple pursuits, mine at least. Don’t get me wrong, I had a great time, as I always do.

But now when I retell the tales about traveling back in time to my beloved Eden near the headwaters of the River Raisin, I keep an open ear to the comments of those following along vicariously. Each inquisitive look or outright query represents an opportunity to expound upon the virtues of this glorious pastime—traditional black powder hunting.

From the outset, I know the explanation will take time. It always does. But without a second thought, I choose to invest the time, and I urge my fellow traditional black powder hunters to invest their time, too. I believe the dividends will be worth the effort.

Explain the virtues traditional black powder hunting offers, be safe and may God bless you.

2 Responses to I Choose to Invest the Time