The Intricacies of Everyday Commerce

Glances about interspersed the half-hour de-lousing fit. A chipmunk scampered tail-up along a rotted, thigh-sized, branchless oak trunk that rested north-south twenty paces distant. A gentle gust swayed turning leaves. October’s glorious fall fragrance, pushed uphill by the warm air, foretold of a fine day ahead, deep in the Old Northwest Territory, east of the River Raisin, in the Year of our Lord, 1796.

Sunlight warmed the front of the yellow linen shirt; furrowed oak bark pressed against the back. Now and again I moved a bit to ease the pressure points; once or twice I rubbed back and forth, scratching a dry-skin itch.

A fox squirrel walked a long branch on a red oak at the big swamp’s edge. Another bounded to the ground near an open scrape to the south. A gray squirrel wandered through the cedar tops to the left. None of these forest tenants was even close to the death bees’ jurisdiction. The only choice available was to sit still and wait.

A while later, the distinct sound of small claws scratching rough bark made its way to old ears. A hearty bounce in brittle leaves betrayed the fox squirrel’s woodland stealth. The black English flint clicked to attention. “Old Turkey Feathers’” muzzle began to rise and reach out. The tarnished-brass buttplate slipped to the shoulder as the squirrel jumped onto the rotted log the chipmunk ran along. The bushytail’s pace quickened. The turtle sight chased, overtook and the razor sharp flint lunged.

The Northwest gun’s muzzle spit a fierce, yellow tongue of ominous flame. At the instant of ignition, the fox squirrel dropped behind the oak’s skeleton. The turtle sight slowed in reaction, but the lethal swarm had already exited the bore, or at least that was my impression. Beyond the cloud of white roiling smoke, an explosion of reddish splinters, tannish punk and a few brown oak leaves marked the spot where the squirrel should have met its demise.

Three trade-gun-lengths to the south, the bewildered fox squirrel again appeared on the rotted log, facing straight at my fortress. The little beastie sat upright on its haunches, then turned its head as it watched the mysterious white cloud dissipate. As the chipmunk had done, the fox squirrel bounded along the log, but with a victorious-looking hop, or so it seemed.

The wiping stick pushed a single oak leaf, rolled into a ball, down the bore with the usual squeaky tone. The stick pressed the wadding firm on the lead shot. With the stick back in the ribbed-brass thimbles, I sat back against the oak and attended to the flintlock’s pan.

My thumb wiped the black film from the pan, but as I did, I noticed a wedged-shaped chunk of flint was missing on the side closest to the barrel. My right hand weaseled its way to the bottom of the buckskin shot pouch. My fingers felt two flints in the back corner, then the wrought iron nail needed to loosen the cock screw.

With the muzzle pointed off to the north, I began loosening the cock screw with the tip of the square-forged nail, which I had filed round a couple of years before. The new flint waited on the top edge of the wool leggin. My attitude was less than jovial. The missed squirrel was a forest happenstance, one that I gave little mind to. The broken flint was too, but that flint only offered three shots before it fractured, a happenstance that was less tolerable.

The Value of Trade Goods

Most traditional black powder hunters have a horde of used flints stashed in a maybe not-so-secret location—the thirty year accumulation I have resides in two plastic bags in a back corner of the muzzleloading cabinet. “Someday” I hope to knap them into rifle flints, someday…

Most living historians who shoot with some regularity know the current cost of flints, along with black powder, round balls, patching, etc. But when that same living historian steps across time’s threshold does his or her alter ego know the cost of those items, or the value of other common trade goods, at a chosen time and place in the long ago?

I have two personas for my traditional black powder pursuits: a hunter for a small trading post and a returned Native captive who can’t shake the wilderness ways of his adopted Ojibwe family. The second persona relies heavily on the writings of James Smith, Jonathan Alder and John Tanner.

I often quote Tanner’s “I had but seven balls left…” passage (Tanner, 115). These few words influence some of my traditional hunting practices, such as engaging in a deer hunt with only seven balls: six in the pouch and one eager in the breech of Old Turkey Feathers. I’ve picked this passage apart several times, and today my attention focuses on Tanner’s statement that “there was no trader near, I could not at present get any more.”

In their own way, both personas are dependent on the trader for the hunting supplies they need. Shooting smooth-bored Northwest trade guns, neither persona casts his own lead round balls. Rather, as was the practice in the 1790s, they both rely on a trader at a backcountry post for all of their shooting supplies. That being the case, knowing the current cost of common trade goods is a necessity of forest life.

When asked, Tami and I set up a 1794 trader’s camp at outdoor shows or large educational gatherings. A simple framed listing of what trade goods were worth leans against a tent post. The price list is a compilation of primary sources. Many of the items are found in the 1804 – 1805 ledger pages kept by Francois Victor Malhiot, a young clerk assigned to a North West Company fur post south of Lake Superior or from the writings of Duncan M’Gillivray, another NWC clerk who wintered at Fort George in 1794.

We encourage show guests to pick up the list and peruse the pricing structure, which usually kicks off a history lesson. Fur values are listed in the upper left hand corner with the prime beaver pelt as the base for the currency exchange. For example, a deerskin was worth 1/2 beaver, as was a marten or mink; an otter or lynx equaled 2 prime beavers; and it took 10 muskrat pelts to equal one beaver.

The campsite includes a variety of tanned furs, which add a sense of hands-on reality to the 18th-century barter system. In addition, common trade goods, like assorted fabrics, different sizes of glass beads, brass and copper kettles, trade silver, tobacco and other items are on display for would be shoppers to handle and touch. 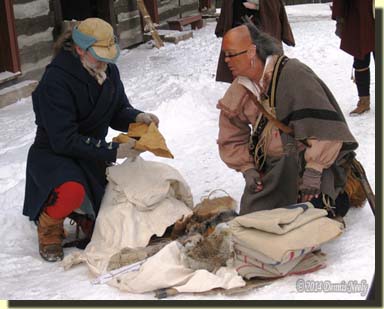 The outdoor shows center on modern hunting, but the values associated with an 18th-century gun and accoutrements are always a popular point of conversation. Old Turkey Feathers, or a Northwest gun like it, sold for 10 prime beaver, a double handful of gun powder, 30 round balls or a handful of shot cost one beaver each. Thus, for 13 prime beaver pelts, or “plews,” a woodsman could walk away from a NWC trading post with a new smoothbore, gun powder, shot and round balls.

But don’t walk away yet, because the “little necessities,” like 12 gun worms or 18 English flints, each sell for another plew or two deerskins, depending on your hunting skills. Oh, and how about a beaver trap at 5 pelts, or perhaps you need a new ax for 2 beaver. Did I mention that a beaver will buy four butcher knives? Or how about a three-point wool trade blanket for 4 beaver? Fifteen silver broaches for one beaver? You are aware that you now owe the trader almost 40 prime plews, or their equivalent?

There is also another side to the ledgers that a living historian or traditional black powder hunter must consider: the goods and services credited or traded for from the Native Americans over the course of the winter.

“To an old woman for having scraped six Deer skins, six Brasses of braid and a comb,” or the equivalent of one plew. (Mahliot, 218)

“gave an old woman, for Lacing two pairs of snow-shoes, a looking glass and ½ Brasse of tobacco,” credit for 2 plews. (Ibid)

Francois Victor Mahliot’s journal and ledger record the business transactions of daily life for the wilderness characters that frequented his North West Company trading post. These backcountry woodsmen knew the values of their trade, both for the peltry they gathered and the goods they purchased. As a living historian and traditional black powder hunter it behooves an alter ego to understand the intricacies of everyday 18th-century commerce before he or she ventures through time’s portal.

Learn the value of your work, be safe and may God bless you.

2 Responses to The Intricacies of Everyday Commerce