Curled, brown oak leaves clung to twigs. The dead top’s branches pointed up the steep slope: the splintered base rested ten paces from the keg-sized trunk. Halfway up from the fork, a natural, man-sized indentation offered respite.

A few acorns hung here and there, but most often empty caps. The air smelled dry and crackly, like that of mid-October when dust can be seen floating like a fine mist. White fluffy clouds filled a third of the grayish-blue sky. On that pleasant evening, the twenty-eighth day of November, in the Year of our Lord, 1796, song birds held a woodsman’s attention, instead of white-tailed deer. 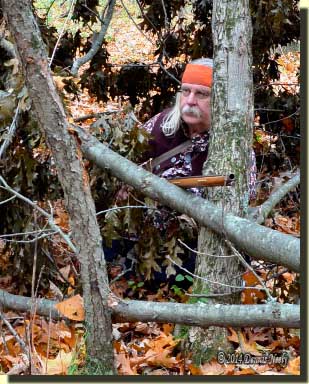 A little titmouse inched closer, cocking its head from side to side. Then a small flock of chickadees flitted about. They returned a second time, just before dark. Blue jays flew hither and yon, but none hollered a warning. Two crimson cardinals visited the treetop, as did a host of chipping sparrows. Crows flew over, silent. Canada geese ke-honked out on the River Raisin, upstream near the sand flats. And just down the hill, out in the river bottom, between the two small islands, a pileated woodpecker pecked away on a barkless white ash.

The brass lead holder scribbled “nothing…” on the journal page. Since early in November, the deer had gone nocturnal. A morning sighting was possible, a glimpse at dark proved rare. In the midst of the frustration, a fox squirrel chattered to the east. The bushy-tailed rodent took a while to find. It sat on a dead limb, jutting out from a tall oak’s midsection.

In time, the fox squirrel grew quiet. It took three slow, graceful hops to the trunk, then I heard the tiny claws dig into the oak’s thick bark as it made its way up to a big, leafy nest. I could no longer see beyond the second island. The air grew cooler and started to flow downhill. That day’s hunt was at an end.

But I still sat. Two deer-like shapes appeared at the north edge of the closest island. The smaller headed east into the muddy bottom. The largest stood, then began to cross up and over the island. The deer circled west through the fallen ash trees, skirting a wet, muddy bog. At the base of the hill, it angled east as it plodded up the slope.

The buck walked beside my lair. I could make out ear tips, then main beams. The tines were fuzzy-gray and uncountable. The beast’s neck was thick; its body firm and trim. “Three and a half years” ran through my mind. “Perhaps the medium eight point?” He paused at maybe twenty paces, broadside, head down a bit, looking uphill, unconcerned…

Leaves crackled and popped with each hoof-fall. The noise stopped at the edge of the area where I perceived my deadly scent traveled earlier in the evening. I heard him turn, then stand, all slow without any hint of alarm. The brittle leaves betrayed the buck’s return downhill. Through the treetop’s veil I saw his legs move out of the corner of my left eye.

Caution tempered curiosity. The buck was thirty-five paces distant when he hesitated, turned to his right, stood and stared at the treetop. He flipped his nose skyward; I never saw him lick his black nostrils. His head gazed to the east, then to the west. He adjusted his stance and faced downhill again, broadside to the treetop. Minutes ticked away, then he dropped his head a bit, turned and walked up the rise and into the darkness.

What Would Josiah Hunt Do?

“I didn’t know there was a top down here,” Tami said, pointing uphill with one of the branches she was using as a walking stick.

“That’s where I was sitting when the buck came out of the river bottom last November,” I answered.

“And you didn’t shoot?” she asked with a bit of a scowl as I walked in her direction.

“It was after shooting hours, and it was too dark. But I suppose Josiah Hunt would have taken that shot in a heartbeat.” The words just slipped off my tongue.

Tami spent some time investigating the fallen top and commented that it offered good cover. She asked what the wind was like, then turned and looked out over the bottomland. Satisfied, she walked around the top, using her two walking sticks, looking from side to side for shed antlers.

Of late I have been repairing my clothes for my trading post hunter persona. The knee breeches have more holes than solid fustian, so a new pair is half-sewn. The osnaburg trade shirt is mended, and I’ve settled on a color for dying the linen hunting shirt, again. I miss that persona.

I got wrapped up in the life and times of Msko-waagosh, Red Fox, the white youth captured, adopted and raised by the Ojibwe. The trading post hunter and I have put a ton of miles on a lot of moccasins together. Josiah Hunt was a key influence on that persona, and I surprised myself a bit when I summoned his name instead of John Tanner’s.

“He [Josiah Hunt] was an excellent hunter. In the winter of 1793, while the army lay at Greenville, he was employed to supply the officers with game, and in consequence was exempted from garrison duty. The sentinels had orders to permit him to enter and leave the garrison whenever he chose. The Indians made a practice of climbing trees in the vicinity of the fort, the better to watch the garrison…To avoid this danger, Hunt always left the fort in the darkness of night, for said he, ‘When once I got into the woods without their knowledge, I had as good a chance as they…’” (Howe, 199)

With the deer going nocturnal, I was in the habit of unloading “Old Turkey Feathers,” my Northwest trade gun, which in Michigan means emptying and cleaning the pan, setting the frizzen up and the hammer down, and sitting after the close of shooting hours to see when the deer were moving.

That was the intent that evening, but the buck came out just at dark, so I didn’t have to wait long. I thought he was by me, but then he stopped uphill, turned around and came back. I believe he picked up my scent, despite tearing up the ground before I sat down, which acts as a natural cover scent.

After making my comment to Tami, I thought about what an 18th-century woodsman would do in that circumstance. I could not see the turtle sight; I couldn’t even see the buck’s tines or the top of the browned barrel. I’ve often wondered how well I would hit if I just aimed by feel, and some night I think I shall try that test. The results might prove interesting, and I dread to think what kind of attention shooting after dark might draw.  Buy still, it would be an interesting experiment, not that far off of candle shoot. 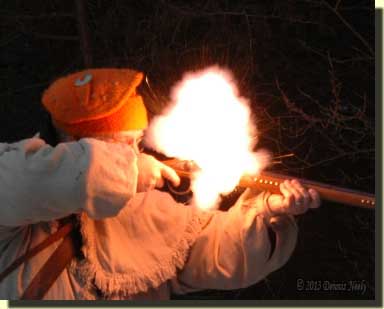 Further, I dislike taking a shot when the light is such that the flash in the pan is obvious, beyond the smoke, of course. There is a fallacy that white-tailed deer “duck” an arrow. From carefully watching spooked deer, they drop down in the shoulders and spring off their front legs when startled. This loading and unloading of the muscles appears to be an intentional “ducking” action, but in reality it is just a normal flight response.

But the dropping down is real and a woodsman must take that into account when crafting a shot. This is why I never shoot at a deer that is looking right at me, choosing instead to wait until the deer is looking away. The hammer fall, the flash and the resulting smoke come before the projectile arrives, and in those split seconds, a deer can react and the desired point of impact moves, often causing a bad hit.

In a low light situation, the pan’s flash is an easy warning signal, and I believe Josiah Hunt would have taken that into account, as well. So perhaps my response was more whimsy than thought-out historical reality. Hunt might not have taken that shot in a heartbeat…

2 Responses to In a Heartbeat…