Posted on May 12, 2016 by Dennis Neely: Traditional Woodsman

The Northwest gun leaned against a small red oak, its girth the same as a brass kettle that trades for five beaver pelts. The open-topped, Ottawa-style shot pouch hung from the muzzle, as did the bison powder horn. Two steps away a finger-long needle slipped through a grayed canvas piece. The fiber cord bound the canvas’ upper edge tight to the bent cherry sapling. 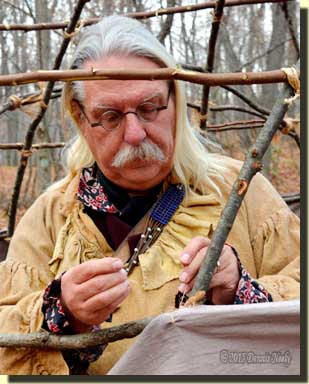 I could hear Ziibi Ikwe, River Woman, my Ojibwe mother, admonishing me for the wigwam’s pitiful shape. Thankfully, she would never see this shelter. The east side saplings bent as they should, the west ones were of a poorer quality with many knots. Their arch was flatter, rather than round.

A chipmunk’s steady chirping echoed throughout the woodlot. The striped rodent sat on a rotted log on a little rise, displaying all the nobility of a captain at the helm of a great ship adrift on a sea of damp leaves. A blue jay’s contented song, “Swip-it! Swip-it!” punctuated the chipmunk’s melody. With some looking, my eyes found the bird perched on the jagged remnants of a broken limb, high up in an oak to the west.

A stout tug pulled the needle through the canvas weave. The cord’s fibers slipped through the eye. The silver needle rolled, then tumbled free, end-over-end into a clump of ankle-deep green grass that grew through two fall’s worth of oak leaves. My eyes marked the spot as if it was the last glimpse of a wounded buck’s flight.

I knelt expecting to pick up the needle, but it was nowhere in sight. My fingers removed leaf after leaf, placing them to the right beside a small grove of two-leafed maple spouts. Twice I looked up and scanned the forest, then the needle fell from between two large brown leaves.

Another chipmunk chirped, off to the west. It ran through a small patch of trilliums and into a hollow log. In a few moments, it popped out of a limb that pointed upward. Then all sounds ceased. The glade grew chilly and spooky quiet. Overhead, the unfolding leaves did not seem to touch each other, yet they rustled as if driven by a steady wind. Without conscious guidance, my elk moccasins stepped to within an arm’s reach of the Northwest gun, pouch and horn. I stood still, watching, waiting.

Off toward the River Raisin’s sand flats, a single goose honked over-and-over—just a single “ke-,” not the full “ke-honk” or “ke-honk, honk.” A bit relieved, I grasped the next canvas piece and held it up to the horizontal rib that was chest high. I folded the canvas edge over the finger-sized sapling, pushed the needle through the weave, looped it twice and tied it off, binding the panel’s corner to the wigwam’s frame. About then a bullfrog started croaking over the rise and down the hill in the stagnant pool in the nasty thicket near the isthmus. I smiled. I was finally hanging canvas…

A Return to the Wilderness Classroom

The past few weeks have been especially strenuous and exhausting. There is no relief in sight. The days grind on and the “must do list” never seems to get shorter. In a fit of frustration, I pushed away from the desk. For my own sanity I had to take a break from the phone calls, emails and appointments. Scribbling time has been almost non-existent, though somehow I have met all of my deadlines. As I bolted out the door, I told myself to hold all calls and all appointments until 11 o’clock. An office staff of one still needs reminders and occasional guidance, at least the historical me thinks I do.

The wigwam’s frame went up in October, my third in thirty-plus years. Msko-waagosh harbored fond thoughts of using that shelter throughout the fall hunts, but that plan never came to fruition. For whatever reason, fruitful lessons in the wilderness classroom sometimes require a long recess.

I managed to hang two pieces of canvas, each 4-foot wide by 12-foot long, but they did not suit my liking. They looked far from period-correct. I secured the top edge first, but the wigwam’s dome shape requires more material at the bottom, and I forgot to take that into account. I got snowed out, so those two pieces of canvas remained on the frame throughout much of the winter.

When the spring classroom bell rang, I began the lesson by cutting each piece of canvas in half, yielding 6-foot sections. The shorter length minimized the distortion issue. Stress melted away with each stitch. My attention focused on securing one piece of the wigwam’s covering at a time, intermixed with surveying the forest for impending danger.

I established a rhythm after the second piece. I imagined an Ojibwe family could cover a wigwam’s frame in a fraction of the time it took me. Like all wilderness classroom learning, hands-on experience and careful replication smooths any 18th-century process. By my twenty-fifth wigwam, my handiwork should meet my adoptive mother’s expectations.

Just being in the woods was a relaxing treat. On the way out I thought about turkey hunting first, but deep down I knew there wasn’t sufficient time to do justice to both. The wigwam, or lack thereof, has gnawed at my innards all winter long. For me, there is a huge difference between learning from a failed attempt, and failing to attempt. Finding time has been a critical factor in the last few months, but still…

Seeing steady progress told me that I made the right choice. I never heard nor saw a wild turkey. Working with my hands took my mind off 21st-century distractions, but to a greater degree, I feel the joy of that morning rested in the little creatures of the glade, as it turned out, the chipmunks. The constant chirping and dashing about made it easy to step over time’s threshold and return to my 1790 Paradise. 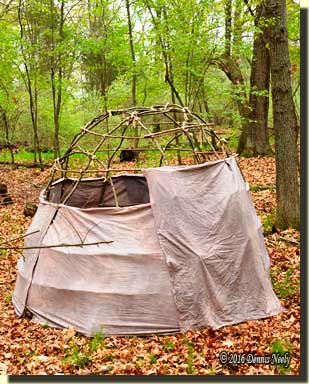 Five canvas panels covered the shelter’s lower bents. I picked the sixth canvas piece up, draped it over my arm and walked around the wigwam. There was no question Ziibi Ikwe would be upset, none whatsoever.

In my defense, I saw the uneven bending in October, and it bothered me then. I untied the horizontal ribs and then the offending bents while the saplings were still green and supple. Try as I might, I could not get those west saplings to bend in the classic wigwam shape. I did the best I could and retied them—such is the nature of some wilderness classroom lessons.

When I finished the walk-around, I felt inspired. I wanted to continue with the next layer, but it was nearly 11 o’clock. With great reluctance, I walked back through time’s portal. But I was finally hanging canvas…