To the right, the slow, rhythmic “thump…thump…thump” of a camp ax splitting kindling punctuated a red-breasted robin’s cheery twill. In the distance, the two-story log blockhouse looked abandoned, yet its presence offered an unmistakable sense of frontier security to the canvas village.

A couple sat beneath a dining fly. The gent smiled and said, “Good morning, sir.”

A wispy white plume snaked westward from his fire pit. A well-used water pot sat on a forged grate above the coals. It was then that I realized the sun was full up, its rays streaking through the maple that shaded the couple’s humble abode in the afternoon. 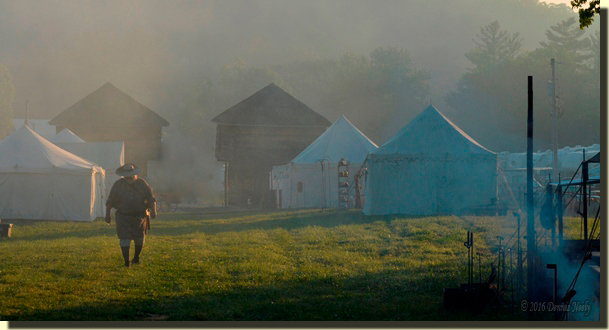 As I do in the forest, I turned a bit to check my back trail. The high gates, the ones suspended from the twin blockhouses to the north of the valley, were now propped opened. Beyond, a murky haze shrouded the sycamores and maples that lined Laughery Creek. Three camps into the commons, an unarmed wilderness tenant walked in peace, following the same approximate path as I.

I recognized David Brattain’s stature and gait. We, along with a number of other hearty souls, defended the fort against attack two Junes ago. David is a rifleman of noted skill, a marksman one wishes on his or her side in a heated scuffle.

As he passed, he waved at the couple. “Good morning,” he said.

“It is a good morning,” the gent responded. “I don’t have my shirt on. Please excuse me.”

“You’re okay, you’ve got fur,” Brattain said with a broad smile and a deep-chested chuckle. With that, the old friends struck up a conversation as a new day dawned at Friendship…

The Mystical Solitude of Friendship

Rounding the sharp curves on the narrow road into Friendship, Indiana, the home of the National Muzzle Loading Rifle Association, is always a challenge. Keeping in your own lane requires concentration, a concentration that shuts the rest of the world out of one’s conscious thought. When the grade flattens out, turns right and passes over Laughery Creek, a mystical amnesia seems to fall upon my being.

It is not that I am a different person; I am the same me. Yet, “Friendship,” the single word used to describe this mythical black powder shooting sports haven, brings to the fore interests that the tribulations of everyday life suppress. For a brief period, be it one day, a few days or a week, the Friendship experience provides a peaceful solitude that is difficult to find these days.

Take the walk up to the block house on the far end of the Curly Gostomski Primitive Campground. Each moccasin step presents the potential for a new adventure. I say that often about traditional hunting, but the adventures at Friendship are somewhat different, because they involve other people, not just the birds and beasts of the glade. There are new friends to meet and old acquaintances to catch up with—and with great sadness, there are some who will never return.

That Saturday morning I ended up sitting under a fly with Brattain, David Higgins and Chuck Ziegler. While David Higgins tended sizzling sausages, David Brattain laid out knives on a trade blanket. Ziegler sat in the shade, spoke to passers by and egged everyone else on. The foolishness and good-natured kidding was non-stop and so was the laughter. The innuendos and nuances were subtle at times, bold and brash at others. Again, one must concentrate in such situations, or risk being left in jovial dust.

A few camps over, a fine longrifle, a painstaking reproduction of an 18th-century Lancaster, was the focus of a deep, historical dissertation. I watched and listened and marveled at the knowledge possessed by the trio as they pointed and prodded the patient. Not wishing to interrupt, knowing I had nothing to contribute, I slipped away.

I admired the craftsmanship of the builder, his devotion to the minutest detail and the understanding displayed by his colleagues, but I also felt a nagging sense of ignorance. My interests are in the trade guns, especially the Northwest gun. Yet, despite my best efforts, I cannot keep my Whatelys and Wilsons and Barnetts straight.

On another occasion a vendor in the “sheep sheds,” the name Merrill Deer gave to the terra-cotta-painted, lean-to buildings of commercial row, invited me to sit with him. His large box fan brought welcomed relief from the afternoon heat, which this Michigan boy does not tolerate well. Our conversations wandered all over muzzleloading; an hour passed in a blink of an eye.

The center of the Friendship universe is a shared love of American history, the black powder arms of our ancestors and the preservation of both. The organization’s venues and disciplines are many and varied, each with its own following. One’s vocation is of little importance or relevance. What one’s brother- or sister-in-law did last week carries no sway, either.

And after a day’s worth of shooting, the evening offers an opportunity to sit around, relax and be with shooters, collectors or builders of a like mind. Even in the June heat and humidity, campfires are the norm. The smell of smoke adds to the ambiance and contributes to the next morning’s haze in a sort of self-perpetuating cycle. Staring into the flames and glowing embers is optional, but practiced by many.

So often, someone at a local club or among a group of traditional hunters will mention that he or she has never been to Friendship. After the “You have to go at least once,” comes the usual statement that “but it’s hard to describe. You have to go and experience it for yourself.”

My meager words barely scratch the surface. For those of us who love the arms of our forefathers, Friendship is like no other place on earth. When I arrive, child-like excitement fills my being, and when I leave, angry butterflies fill my stomach for the next fifty or so miles.

As it stands right now, I cannot attend the September National Championship Shoot. Driving down for a single day does not assuage my addiction, rather it aggravates it. But even then, when I round the bend and cross over Laughery Creek the amnesia returns, as it always has, and I find myself wrapped in the mystical solitude that surrounds Friendship.