Returned to its Rest…

Light snow fell. White, ball-like granules the size of goose shot pattered on damp leaves. Dark clouds, the color of quenched iron, brought a chill that caused a humble fort hunter’s nose to drip. Winter moccasins, lined with two layers of trade blanket, whispered along a doe trail on that second day of May in the Year of our Lord, 1793.

That morning’s course dropped into the little valley north of Fox Hill. The trail crested a rise, then dropped again. The still-hunt paused at a downed oak top that still held the previous summer’s foliage. The only sound was hard snow balls popping all about—no geese on the river, no Sandhill cranes, no blue jays, no cardinals and no wild turkeys. The buffalo-hide moccasins pressed on… 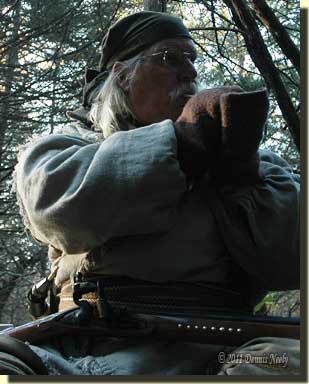 A red oak’s bark cut into the shoulder of my hunt-stained, caped linen shirt as I leaned, watched and listened. The eerie silence continued, brought on by the snow squall, I surmised. Ahead, a twisted tangle that once was an oak tree top, beckoned. Deer paths passed on either side of that fortification. The trail I followed intersected both, perhaps twenty paces from the thickest mess.

Step and pause…step and pause… The still-hunt progressed at half speed. One buckskin-clad leg, then the other eased over a big branch. Down on both knees, I surveyed the woods and the three paths. After a fair amount of silence, a hand-forged ax slipped from its leather sheath.

Suited to More than One Task

I don’t always carry an ax or tomahawk on a traditional hunt; sometimes I leave the ‘hawk at the station camp and travel as light as possible. On that morning, I had the belt ax, the one hand-forged by the late George Ainslie. It was patterned after an ax found in the Pennsylvania area and dated to 1750 to 1830.

The polled head weighs about 12 ounces and it is hafted with a 14 inch hickory handle. Years ago I made a cowhide sheath with a narrow leather shoulder strap, which carries well. This ax lacks “the beef” of the Hudson Bay tomahawk or the Long Lake ax, but it still is a great companion for a trading post hunter’s morning turkey chase. 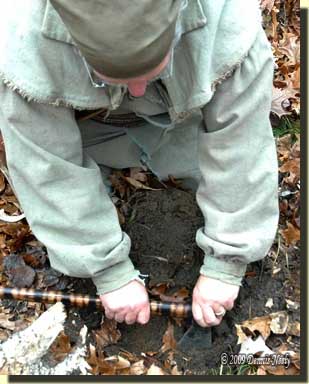 I use my axes and/or tomahawks for a variety of tasks, both in the field and back at camp. Cutting or pounding are the top two uses, but I dig with the blade, use the edge to shave bark or whittle down a wooden implement, like a new haft, or scrape hides. I haven’t been in battle, so none of my axes have found an adversary’s temple—but I have cut bone, mostly hip saddles when field dressing a big whitetail.

The little belt ax’s head is fixed solid to the handle, but the hafts on the tomahawks and the Long Lake ax will slip out of the eye, turning the head into a multi-purpose tool. “Multi-purpose tool” are the operative words there. I view each accoutrement as having many purposes, some I have yet to discover.

About eight years ago, at a Woods-N-Water Outdoor Weekend at the Eastern Michigan Fairgrounds in Imlay City, I leaned “Old Turkey Feathers,” my Northwest trade gun, against our display table. I do that often when talking with guests. As I spoke with a couple of fellows, another gentleman bumped the table with his hip. The gun fell. He was mortified, and kept apologizing. I told him, “You can’t hurt this gun. It’s been used for more than it was intended. I’ve even used it for a canoe paddle, once.”

The last statement led to the story of knocking my paddle out of the canoe on a duck hunt. As I watched the River Raisin’s current sweep the paddle downstream, there was little choice but to dump the pan, wipe it out, set the hammer down and start paddling. As always, Old Turkey Feathers was up to the challenge, but I made it a point not to dip too low and submerge the touch hole.

After that story the gentleman seemed relieved; he shouldered the gun and paid particular attention to all the nicks and scratches, including the missing finish on the forestock. I went on to explain that an unloaded trade gun makes a good measuring stick when laying out a half-faced camp or a wigwam. The smoothbore acts as a walking stick on a treacherous hillside (butt down) or adds balance to getting up after sitting cross-legged on a bedroll. With an empty barrel (checked first with the wiping stick), the lock will send sparks into char for starting a fire, much as Alexander Henry did in the 18th-century (Armour, Attack…, 87).

Any simple pursuit is filled with unexpected circumstances, and at any moment a traditional woodsman may be called upon to use his or her wits and the limited 1790-era resources available. Traveling light further compounds the issue, but at the same time surviving with the minimum of accoutrements helps one look at the wilderness with new and inventive eyes.

Looking at the other extreme, I have a good friend who is mainly a line shooter. Occasionally he shoots “hunter matches” out of the pouch, but his leather pouch is more like a duffle bag—about ten inches by ten inches with a three inch gusset. For the hunter matches he often shoots a nice flint Pennsylvania longrifle, .54-caliber, I think.

If he were traveling light, he needs a powder measure (not necessarily period-correct, but best for safety sake), patches, round balls, a vent pick, a spare flint or two and a gun worm. Depending on the muzzle and the tightness of the patch/ball fit, a short starter might be in order, too.

But then we start stuffing the Thanksgiving turkey with all of the items we might need for the five-, ten- or twenty-shot match.  There are separate cleaning patches, a bottle of “moose milk,” a buckskin sack with a ball puller, spare worm, spare jag, screw-on rod extension, and a linen drawstring bag with a mainspring vice, spare springs, an extra frizzen and assorted lock screws. We have an adjustable powder measure, a brass funnel and two bags of round balls, five-thousands over and under the ones chosen. Oh, and the bronze ramrod puller, a patch knife and extra rolls of patching, different thicknesses, of course, two turnscrews and a small set of needle-nosed Vice Grips®.

Now all of these “extras” can be justified by actual range experiences—my friend has boxes of shiny medals attesting to his marksmanship, accumulated over 30-plus years of shooting competition.

I’ve tried on a number of occasions to convince him to give traditional black powder hunting a go, but he balks. As he says, “I don’t want to lug all that stuff into the woods. Do you know how much that bag weighs?” Instead, he wears camo coveralls with appropriate hunter orange and carries four plastic speed loaders in his pocket. “If I have a problem, I can walk back to the car…” he says, justifying his modern version of traveling light.

One Response to Returned to its Rest…