Ears twitched. Deer flies hovered over a hat-sized patch of mud, dried on a muscled shoulder. A long, black, broom-like tail swished twice, almost reaching the closest steer’s back, the largest one, an Angus/Limousin cross. Three cinnamon-red Herford/Limousin-cross cattle stood just beyond the ringleader. One of the “reds” raised then thrust down a cloven hoof. A small dust cloud marked the spot. 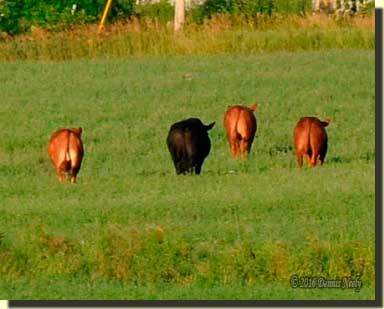 Three Sandhill cranes chortled to the southwest, around the bend in the wagon trail and up on the first hill in the tilled field. A dozen minutes before, that trio stood erect with their slender beaks following the plodding progress as three gray-haired backcountry boys urged the four head along. The prairie grass beside the bean field smelled of dew, burning off in the brilliant sunlight of a humid July morn.

The lower field’s headlands, where the four now rested, showed nary a wisp of greening sprouts, thanks to a late spring drought. There the air was parched, dry and dusty. The only hope of a potential crop was rocks and gravel. Why the cattle decided to stop there defied reason, but cows don’t reason well, do they?

Walt, the farmer who owned the wayward steers, shook a bucket half-filled with shelled corn. The southern-most steer turned and looked at him. It raised its head and appeared ready to start walking again, but the Angus, the one we started calling “That Black Devil,” wouldn’t budge. He faced south, content to just stand and switch his tail and chew and drool.

Not knowing these four, fifteen paces was as close as I dared venture. We all spoke soft, urging then to again strike off on the journey home, but they were not ready to move, at least the Black Devil wasn’t. Patience is a virtue when herding cattle. A steady plodding beats a fast walk, or worse yet, an outright run.

Then, for no apparent reason, the Angus turned and started walking to Walt. The others followed. Jerry, another neighbor, said, “They must have rested enough.” There’s just no reasoning with cattle…

I joked for several days about joining Gil Favor’s cattle drive. “Head ‘em up, and move ‘em out,” “watch those dogies,” and “where’s Wishbone, I need some grub” intermixed in my everyday conversations. Strange looks, what strange looks? One or two of the references wandered into texts or emails. By the weekend my family thought I needed a serious intervention, but I doubt they have ever seen the early 1960s television western, “Rawhide.”

As kids, the whole family sat in front of the Spartan television that Dick Knapp sold to my parents and watched “Rawhide,” “Wagon Train” and “The Rifleman.”  The screen was an icky- green and showed a black and white picture that moved—impressive stuff. The case was solid mahogany filled with neat vacuum tubes that lit up—you could see them through the little vent holes in the back. Hey, there’s a reason I’m easily distracted…

Anyway, as I walked behind the steers, I found myself humming the theme song to that show. I used to do that when I was a kid and helped wrangle the dairy cows. I suppose that is a version of time traveling. I looked up the show and discovered it ran from 1959 to 1965. The scary part is when you stop to do the math and realize that was a half-century ago. Some days living history/time travel has a more frightening side to it.

When we had our little “standoff” in the bean field, I felt myself slipping farther back than just a half century. Before those few minutes, I tried real hard to picture the four head of cattle in an 18th-century setting. Not being dressed in period-correct clothes and not having “Old Turkey Feathers,” my Northwest trade gun, in my hand didn’t help the situation any. I should have known better. A traditional black powder hunter can’t force his or her way back into yesteryear’s cobwebs.

I stared into the eyes of the Angus. He stared back and drooled a bit. In hindsight, at that moment I felt myself drifting, physically moving, or so it seemed. Perhaps it was the heat, but I couldn’t perceive either Jerry or Walt, only those steers before me. I glanced to the south, then to the north. I turned to my right and checked my back trail. “This is how Jonathan Alder became a captive,” I whispered.

“It was now the month of May 1781 [an editor’s note: (March 1782; Howe, Beers) refers to other versions of Alder’s narrative] when the leaves were all out and the woods were very thick. One pleasant and sunshiny morning, everything looked gay and beautiful and my mother called to my brother David and myself and told us that we must go and hunt a mare and colt that had been missing for several days…” (Alder, 29-30)

The brothers found the mare and colt, but the colt would not get up. Alder continued:

“It had eaten the plant called ‘stagger wood.’” As the brothers worked to get the colt up, David “…hallooed out, ‘Run, there is Indians!’…there were five Indians in all, and one white who had been taken prisoner years before…I could not move, and by the time I looked around (for they came up behind me), one Indian was right up to me and held out his hand and took hold of it…” (Ibid, 30)

The mystique of those few fleeting pristine moments evaporated when the steers left the wagon trail and turned north on the gravel road that led back to the Wright homestead and barnyard. But as so often happens, my mind mulled over those pristine moments, especially my looking about, in the context of the 1790ish frontier. 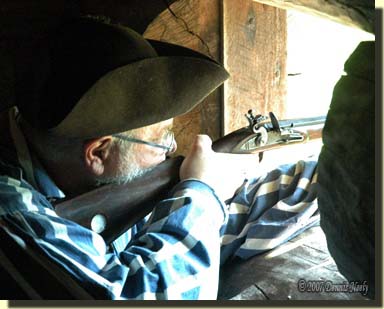 As living historians and traditional hunters, we spend countless hours sifting through primary documentation in search a tiny golden nugget, yet we often fail to recognize the gold dust that exists in our own life experiences.

As I thought about Jonathan Alder chasing the mare and colt, I realized I have a modest amount of background tending farm animals, and further, farming in general. That knowledge never makes its way into my traditional hunting/living history scenarios, and it should.

About four years ago I purchased and read Joseph Ruckman’s book, Recreating the American Longhunter: 1740 – 1790. I picked the book up again and started re-reading it a week before Walt’s steers got out. One passage in particular stuck in my mind and came to the fore while I jogged to get ahead of the steers as they decided to make one last break for freedom. Two read arrows mark that passage; the one sentence is highlighted in yellow and underlined in red:

“…I want to dispel the myth that the longhunters spent all their time hunting or among the Indians. Those whom we remember best as longhunters—i.e., Daniel Boone, Simon Kenton, the Cresaps, and the Gists—were primarily farmers, and to a slightly lesser extent, cattlemen and herdsmen. Hunting and exploring were essentially sidelines, and dealings with Indians were more often than not of a hostile nature. The point is, if you want to portray a believable longhunter, you should know something about farming…” (Ruckman, 7)

As a living historian, I feel I sometimes put too much emphasis on one or two paragraphs devoted to a woodman’s hunting exploit. That may be just me being too hard on myself, but by narrowing my focus, I lose sight of the overall picture, sometimes to the detriment of the authenticity of the impression. There are other instances of farming and animal husbandry woven within the fabric of many a hunter’s tale, but I’ll let those be, for now…