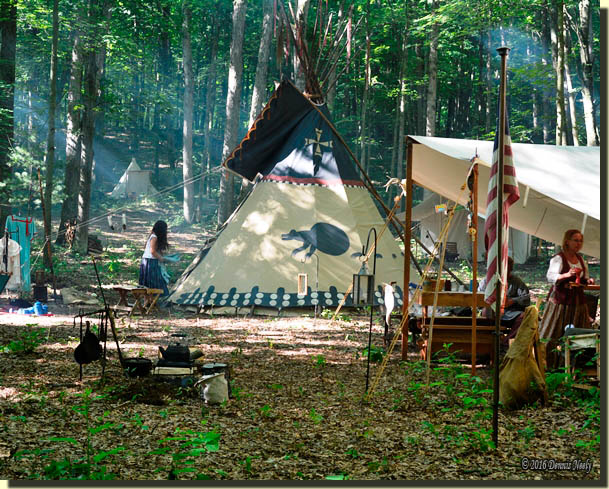 A tranquil Monday morning at the 2016 Old Northwest Rendezvous in Hopkins, Michigan.

The last month or so has been really busy, beyond belief, really. Between the National Muzzle Loading Rifle Association’s Spring National Shoot, covering several Michigan black powder shooting events, including the Old Northwest Primitive Rendezvous, and trying to deal with the utility company’s tree trimming crew, the last few weeks have not been my own.

The greatest disappointment is the loss of over 200 trees on the North-Forty, the majority of which did not and would not pose any threat to the power lines and/or public safety in the foreseeable future. But “…we have to adhere to the standards we set…,” which really means “You don’t own your own property…”

And there is little concern about disrupting one’s writing business or saddling the land’s steward with the cost of cleanup once the last trim-truck pulls out. It’s difficult, if not impossible, to turn the happenings of the last two weeks into a positive 1790-era happenstance. Maybe in a few months or so?

On a more upbeat note, I “signed on” as a trail hand for a cattle drive Thursday morning. At most, my term of employment was only a couple of hours. Years ago, when the dairy cows got out, I used to hum the theme song to the old western “Rawhide” (well it wasn’t “old” back then) as we herded them back to the field.

As the neighbor’s steers turned the bend in the two-track, I caught myself humming that tune. I expected Rowdy Yates to come riding up in a cloud of dust with Wishbone’s chuck wagon clattering and flapping close behind. And although I was “not dressed for the occasion,” I did experience a few pristine moments that dovetailed with one of the points in Joseph Ruckman’s book, Recreating the American Longhunter: 1740-1790. More on that in the near future…

So yes, I’m still alive and kicking, and to hear the utility company employees tell it, ornery beyond common civility…

2 Responses to Ornery Beyond Common Civility…