Dew splashed. Prairie grass swished against buckskin leggins, damping the grimy leather. Elk moccasins veered east four paces, stopped, then turned about. A thick, chilly fog hung over the swale hole on that late-October morn in the Year of our Lord, 1798. The air smelled wet, laced with wild mint and a sweet hint of drying field corn.

Three steps north, two east, then another about face and a long pause. Five paces west, one south and two more west brought another hesitation to this manic, wilderness dance. The Northwest gun’s muzzle pointed up and out a bit, moving in time with each footfall, anticipating at each small respite. A swarm of death bees, packed tight and firm, waited for a freeing blast. And all the while, an eager thumb fiddled with the hammer’s jaw screw.

The zigzagging course advanced through the prairie grass, explored the red willows, skirted the soggy cattail stand and dropped down into the tawny, tangled, thigh-deep sedge grass. The swale hole search completed, the erratic waltz angled east, and into a slender finger of cover that led to another tiny willow stand, then on into a half-acre of shoulder-deep canary grass.

Not far into the finger, the wilderness dance revealed two nest-like forms with fresh fowl droppings. A zig or two left, a short advance and a quick retreat failed to find other evidence of pheasant roosts. A dozen yards to the east, a round ring of tiny white leavings betrayed a modest covey of bobwhite quail, but it appeared days old. Just before an odd-shaped willow stand, the advance paused for a few minutes, more to plan the next attack than for unnerving the fowls…

Michigan’s small game opening day is five weeks away. Anticipation is growing, and this year there seems to be more interest in small game hunting, at least among traditional black powder hunters in this state. Unfortunately for me, the pheasant hunting is non-existent in my area, but I did hear a morning cackle about two weeks ago.

The other night, Tami and I flushed a pair of bobwhite quail as we moved along the edge of the bean field. We are on the northern edge of “quail country,” and our birds are very susceptible to ice storms and severe winter weather. 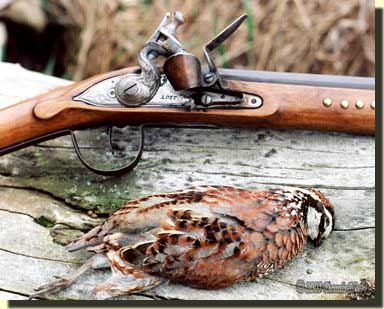 As a kid, I remember having as many as five different coveys on the farm. About ten years ago, our quail population was back up to two coveys, and I took a couple of birds, just to bust the coveys up. The game bird biologists recommend breaking up the coveys to improve their growth and expansion. Then we had two bad winters with prolonged ice.

The increasing interest in small game hunting with black powder smoothbores brings with it the usual questions about expected shot patterns and effective distance. The answers vary with the arm, but the first step is always the pattern board at a local range or on the back forty. But once a hunter develops an efficient load that patterns well there is a second step, which is assessing the penetrating power of that load—and most discussions overlook this important point.

As ethical game managers, every hunter, modern or traditional, bears the responsibility of making sure his or her field load effects a clean and humane kill. Manufacturers of the plastic suppositories do this for the modern hunter, so it is never a conscious consideration. But black powder hunters must realize they develop the load, and they bear the responsibility.

I discovered black powder shotguns when I was a teenager. I don’t remember who first directed me to the Dixie Gun Works, Inc. catalog, but in those days Turner Kirkland’s “General Information” section in the back of the catalog was considered a sound place to start when it came to black powder shotgun information.

After walking a newcomer through the basics of feeding a smoothbore, Mr. Kirkland included a wealth of tables that I still refer back to today. And in the midst of those tables was a small, often overlooked, paragraph:

“How to Tell if Your Muzzleloading Shotgun is Shooting Hard Enough”

“When I was a boy years ago hunting rabbits with a muzzleloader, I figured out one way to see if I was loading heavy enough and I still use this idea as a good one. Start with a powder and shot load slightly under the recommended weight and shoot at a regular tin can at 20 yards. If you are loading too light, the pellets will not penetrate the tin can. If you will try to load a little heavier you will finally locate one in which the pellets will penetrate the tin can and then you are loading hard enough to kill a rabbit or a dove or even a duck…” (Kirkland, 612)

I’m not sure why Mr. Kirkland chose “20 yards” as the test distance, but I usually tell folks to determine a pattern’s effective distance, the maximum distance that the pattern will humanely kill a given game species, and use that as the test distance. In the case of “Old Turkey Feathers,” I like set the tin can out at 28 paces. I use a medium-sized bean can, usually the brand hawked by the golden retriever with no scruples when it comes to safeguarding the “secret family recipe.”

However, of late I have become more specific on what “tin can” to use. Some time ago I passed along Turner Kirkland’s wisdom to a newcomer at an outdoor show. As always, I told him “medium-sized, tin bean can.” Much to my dismay, the fellow tested for penetration using an aluminum beverage can. He was ecstatic when he reported how his shot pattern “ripped that can apart!”

I have had a yellow note kicking around my desk for some time reminding me to address the “tin can” issue, and with small game season on the horizon, now is as good a time as any. The essence of the confusion boils down to the thickness and resulting resistance to deforming of the tin vs. the lack thereof in the case of the aluminum can.

Following my own admonition to conduct testing that another traditional hunter can duplicate with the same results, I started measuring the smooth-wall thickness of the tin cans I prefer with a micrometer. 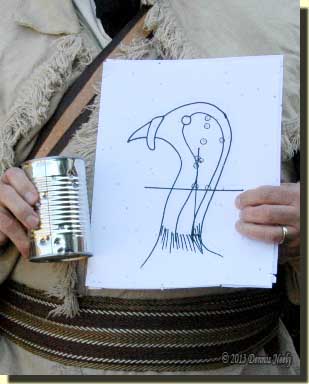 The medium-sized, 28-ounce bean can measures .011-inch, keeping in mind that I am primarily a woodworker who holds tolerances of 1/64-inch—stop laughing, Bob. I sometimes use 28-ounce diced tomato cans, and those measured .012-inch. Obsessed with this wilderness classroom lesson, I began rummaging through several bags of cans, measuring samples at random.

I found the smaller, 10- to 18-ounce, name-brand soup, kidney bean, pie filling and pineapple cans ranged between .006- and .009-inch thick. The generic varieties were .006- to .007-inch in smooth wall thickness. There is a reason they “rib” the containers for added strength and why generic brands sell for less.

Turner Kirkland’s “tin can” was from the 1950s, or before. Out back in the shop, I found some older tin cans that store nails. Most of these cans are from the early 1970s. The four cans I measured are all equivalent in size to the 28-ounce bean cans and ranged from .011- to .013-inch thick, which surprised me. I expected they would be thicker.

The majority of pellets from what I consider a hard-hitting load that strike a bean can straight on penetrate the front and at the least deep-dent the back. Some go clear through. Also, pellets that hit the curved side of the can leave a deep groove or sometimes tear the tin. The result of all this testing is that I will now recommend testing with a tin can with a smooth-wall thickness of .011-inch, give or take .001-inch.

And there is a third step that I follow and have for years: I take care in cleaning all of my wild game. It goes without saying that good meat preparation includes locating and removing all of the shot pellets. When I do that, I study the performance of each shot pellet, keeping a watchful eye on penetration. And when I dress bigger game, like a wild turkey, I skin the head and neck, even though I have no intention of eating it. I want to see what the shot did. I owe that to all of God’s creatures that grace my table.

Comparing these observations to the tin can penetration test, I believe Turner Kirkland devised a good test procedure. The range results offer a reasonable indication of pellet penetration under actual field conditions. And that affords some additional peace of mind, at least for me.

A few paces from the red willow patch, the prairie grass thinned, grew short, then began to blend with clumps of sedge grass. Despite great stealth, a golden rod stem snapped, then two crackled. A single willow switch with two yellowed leaves twitched, not ten paces distant. My left moccasin stepped to the fore. The trade gun’s sear clicked loud as the razor-sharp English flint jumped to attention. The tarnished, flat butt plate moved out and up as a backcountry woodsman’s weight shifted forward.

The rooster pheasant cackled as the near edge of the willows erupted with a thrashing of frantic wings and the unmistakable flash of an iridescent green head and broad white neck band. The cinnamon fowl flailed straight up about three trade-gun lengths, then flew leveled off, gaining speed and altitude with each wing stoke.

The Northwest gun’s turtle sight chased the quartering bird’s tail, pulled through the fowl’s body, and when it passed the rooster’s beak, the flint crashed against the frizzen. “Kla-whoosh-BOOM!”

The death bees swarmed. Orange fire belched from below the turtle sight. A white sulfurous stench boiled into a growing curtain that obstructed the pheasant. Then, at the smoke cloud’s east edge the fowl cartwheeled into the short prairie grass at the brink of the canary grass.

Elk moccasins loped to the lifeless bird. The load of #4 shot had done its bidding. I picked up the bird and realized the circumstance unfolded so fast I never had a chance to pray the hunter’s prayer: “A clean kill, or a clean miss. Your will, O Lord.”

With a humble heart, I corrected that oversight, giving thanks for the blessing of a fine October morning in the Old Northwest Territory.

This entry was posted in Uncategorized. Bookmark the permalink.