Stars faded. To the east, a warm orange glow back lit the dark shapes that lined the hardwood ridge. A serene silence marked the calm that greeted first light. The air smelled clean and fresh and cool, invigorating to one’s soul.

Overhead and out perhaps seventy paces, the individual leaves seemed important beyond measure, more so than the whole of the parent tree itself. And yet, with each moccasin step the perspective changed. A thousand, nay, ten times a thousand dainty, pointed silhouettes lined innumerable twigs and branches.

Silver orbs tipped the ankle-high blades of grass, skewed every which way. A wispy soup hung low upon the rise; this fog engulfed the hilltops, but little else. The valley remained clear, as did the azure, cloudless sky above. All was well in the Old Northwest Territory on that fine morn, late in August, in the Year of our Lord, 1796. 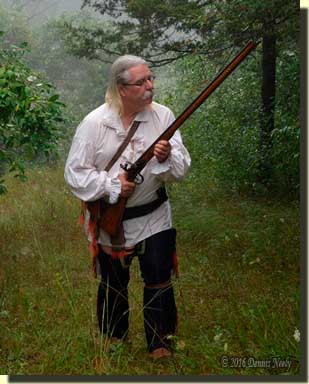 Against historical precedent, the returned captive’s Northwest gun traversed the glade with nary a charge. The course skirted the big swamp and visited the untended scrape at the ill-formed boxelder that grew opposite a favorite November haunt.

To the south, way off, somewhere near the stagnant mill pond, unseen Sandhill cranes chortled in flight. The long-necked birds’ haunting music became louder. In due time three graceful cranes winged overhead, passing low above the south island, then the north, then on to the River Raisin.

From the looks, the sun must have been about ready to peek over the eastern horizon. A wall of cedar trees just below the little hill’s crest blocked that view; the golden spears that highlighted that late summer day’s dawning were but minutes away. Damp elk moccasins, placed with great forethought, advanced up the rise. The still-hunt possessed no objective; perhaps a pristine 18th-century moment…

One Shot or a Magazine Filled with Plastic Suppositories

The 30th Annual Woods-N-Water News Outdoor Weekend is now history. What a great time we had talking with loyal readers and folks unfamiliar with traditional black powder hunting. The days after an outdoor show are always filled with observations that pop up now and again in the midst of unrelated conversations. I try to jot down these little revelations, both to set them in my memory and as inspiration for future musings.

Also, I spoke with more individuals who wish to build their own black powder rifle or smoothbore. Several people have pistols in the works, and from their enthusiastic conversations, I believe the modern-day influx of interest in concealed carry and pistols in general is bubbling over into our hobby.

Another recurring theme was the difference between having one shot or a magazine filled with brass or plastic suppositories. Almost to a person, these discussions centered on the mental attitude associated with “making the first shot count” as opposed to the self-defeating prophesy of “I have four more in the magazine, in case I miss.”

Now I do not wish to ruffle anyone’s feathers, much less embarrass them, if that is possible, but I have tried to make this distinction with one young man in particular. He hunts deer with a black-stocked shotgun and an adjustable power scope. His father tells me he averages four shots at each deer, and misses way more than he kills.

A few days into Michigan’s firearms deer season the father asked me for some shooting advice, in front of his son. After a few questions, I ascertained the first problem was the young man shot five slugs at fifty yards when this scoped shotgun was new. He was sixteen at the time; he was in his mid-twenties when we had this conversation. You, dear reader, can do the math. In essence, he had no idea if his slug was impacting point of aim or a foot off in the hinterlands.

To back up a bit, this young man poked fun at “Old Turkey Feathers” in his late teens. He thought traditional hunting was “behind the times,” which it is by conscious choice, but that is not how he meant the statement.

I suggested some range time and outlined a shooting regimen out to 100 yards. He cringed and looked at his father. Much to my surprise, the son cited the cost of ammunition as prohibitive for such a session. I learned that $25, or there abouts, buys five sabot slugs, not a box of 25 lead slugs as in my youth. I felt the need to point out that twenty or so cents a shot for a round ball and a charge of FFFg black powder was a better deal, but that made little difference. I didn’t think it would, but I had to try.

Anyway, I offered a second piece of advice that I share with great regularity: “Put one shell in the chamber and leave the rest in your pocket.” Again he cringed and looked at his father as if to say, “Is this guy for real?” 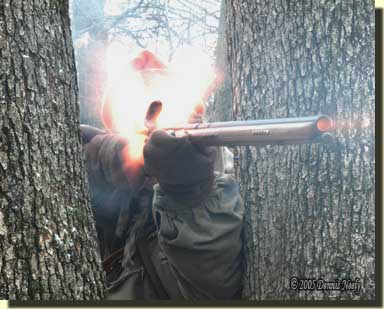 I explained that knowing there is one shot changes a hunter’s attitude both for shot selection and for taking aim. The old axiom, “Your first shot is your best shot,” followed in my attempt to change this young hunter’s attitude, but all he kept saying was something like, “If I miss I know I have more chances.” And that is precisely the reason he misses, because he expects to miss.

The lesson turned to a hunter controlling his or her mental attitude and expectations. As we talked, I realized this young man was shooting at a greater distance than he needed to and not letting the deer move closer before taking the first shot.

And while I was on a roll with the shooting wisdom, I told him to pick a spot on the deer’s side the size of a half dollar—ruffled hair, a discoloration, a shadow or even an imaginary mark—and aim for that spot only. I also told him to practice at the range with a target with an aiming point of the same size.

In the end, the young man pledged to return to the range; I think his father footed the bill for the ammo. His dad said the shotgun was hitting high and to one side. At least both the father and the son gained confidence in the shotgun’s capabilities. From the sounds, they posted commercial targets with a three-inch black center that turn orange when hit—not what I recommended, but a huge improvement over a life-size, full-color deer with big, distracting antlers.

And with great reluctance, the son said he would load just one shell and keep the others in his coat pocket. When I followed up at the end of the season, he told the story of three “near misses” on the same first-year buck—three shots, four shots and three shots; so much for imparting the wisdom of one-shot.

Well, as it turned out, a couple dozen show guests fell into this story line—most swore by making the first shot count, while a few others said they could never hunt with a muzzleloader, much less a flintlock, because they wanted the security of extra shots, “In case I miss…”

Make your first shot count, be safe and may God bless you.