“West, maybe a tad southwest,” a wilderness tenant whispered to his hunting companion. To the east, a hunt-battered Northwest gun leaned against a lichen encrusted jack pine. The smoothbore’s butt rested on the damp leaves and pressed against the woodsman’s right leather moccasin. 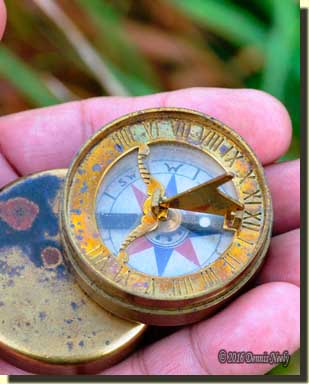 The compass’ needle still quaked some, but the reading appeared true. An index finger folded the sundial’s vane down. The lid covered the instrument with a slight twist. Nimble fingers slid the tarnished-brass compass into the open-top, buckskin shot pouch. With the trade gun’s prime checked and the muzzle pointed due west, the returned captive’s moccasins still-hunted into the dense undergrowth of an 18th-century time capsule.

A tall white pine, standing straight-on a hundred or so paces distant, served as a bearing point. The air smelled of hemlock and musty mold. The canopy overhead dimmed the daylight. Slippery holes, exposed roots and layers of dead branches accentuated the erratic, zig-zag course that hoped to flush a confused partridge.

At a pause, creamy-white, buckshot-sized mushrooms, sitting atop dainty stems in a small hollow near the roots of a maple, garnered the woodsman’s curious attention. A few footfalls to the north, yellow fungi speckled the forest floor. Thirty-five paces north, a fort hunter decked in strange garb studied orange and red mushrooms. He commented on their brilliant colors in the subdued light.

Twenty minutes later, a rotting white pine stump, twenty-some feet tall and riddled with woodpecker holes, hosted a parlay of sorts. The two veteran hunters discussed the lack of squirrel sightings, the absence of rabbit leavings and/or the creatures themselves. The reason for not putting up a single partridge seemed obvious—the poor quality of the site’s habitat.

The two woodsmen trudged a ways to the north, then paused again with compasses in hand. A needle-width north of due east seemed to be the best course as they separated and began the still-hunt back to the wagon trail…

I find it somewhat unbelievable that the Michigan Outdoor Writers Association Summer Conference is over. MOWA members meet twice a year—winter and summer. The organization includes some of the best outdoor communicators in the country who strive to maintain the high standards set by their many predecessors.

This year’s summer gathering was hosted by the fine businesses of the Lake Gogebic area in the far western end of Michigan’s Upper Peninsula. The September date was chosen so hunters and dog handlers could partake of the outstanding grouse and bear hunting that end of the UP offers. The fishermen in the group took to Lake Gogebic, hoping to hook a walleye or limit out on panfish. A local sports shop sponsored ATV trail rides, and the waterfalls and natural scenic beauty of the region kept hikers busy.

Such events act as placeholders in the midst of a busy year. Anticipation grows as the conference dates approach, to say nothing of the chatter in cyberspace. The “summer rendezvous,” as many MOWA members call it, kicked off on the opening day of Michigan’s small game season. 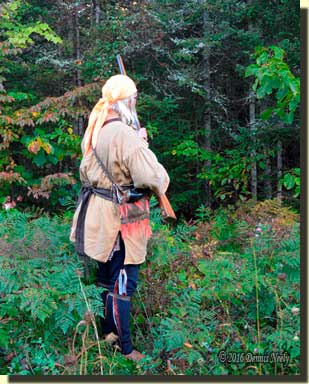 Noted outdoor writer and radio host Tom Lounsbury wanted to hunt grouse with his Thompson-Center New Englander 12-guage percussion shotgun. Tom swears by this gun, and he prefers it for hunting ring-necked pheasants. I’ve tried to convert him to a Northwest trade gun or a French fusil de chasse, complete with linen and leather hunting togs, but to no avail—so far.

In the days leading up to the gathering, Tom extended the invite to other MOWA members to join us on a “muzzleloading grouse hunt.” Not sure of who might take us up on the offer, we packed a couple of “loaner” black powder smoothbores. I took along a 20-guage fusil de chasse and a reproduction, 12-guage percussion double barrel.

The first day Tom and I hunted alone in an area suggested by the owners of a local bait shop. As it turned out, Tom Pink, a popular free-lance writer who pens a column for Michigan Outdoor News, wanted to try a black powder grouse hunt so he hunted with us on Saturday, using the double-barreled 12-gauge percussion shotgun, but that is another story…

The vast majority of my traditional black powder hunting stories take place on the same plot of ground, my beloved North-Forty. That limits me to the game, or lack of game, available in any given season or year. But from time to time, I travel to other locales and sample the hunting on public land. When I do, I make it a point to carry a brass compass that I have owned for thirty years.

This compass found its way into the hunting bag carried by my trading post hunter persona in the late 1980s, when I started turkey hunting in Michigan’s Alcona County. A number of those early pursuits centered on the dense woods of the Huron National Forest. In preparation for the first sojourn, I called the Michigan Department of Natural Resources field office for that county. The attending officer suggested areas to try, which I marked on my county map. He finished his recommendations with, “Be sure to bring your compass.”

Not being familiar with hunting on a plot of ground that didn’t have fences, I never gave a compass a thought. The only vendor that I knew of that sold a compass was James Townsend & Son in Pierceton, Indiana. I had seen them among his goods displayed for sale in the “sheep sheds” at Friendship the September before, so I called their store.

Mr. Townsend answered my questions regarding authenticity—the brass compass was not an exact copy, but close to an original that dated from the French and Indian War era, which predated my 1790s post hunter persona. The price was fair, and the compass arrived in the mail a few days later, in plenty of time for my grand turkey hunting adventure.

My compass skills are rudimentary at best: the instrument held flat in the hand, the magnetic north pointer set to north on the dial, then note the direction of travel out and reverse it coming back. I’m sure that description will make experienced hikers and mountaineers cringe, but it works for me, at least so far.

Along with noting a bearing direction, I also pay close attention to landmarks such as distinctive trees, ground formations and the like. The first time on a parcel is always a new experience, but by the third or fourth outing a woodsman gains a sense of familiarity.

John Tanner makes no mention of a compass in his narrative. I haven’t checked my note tabs for all of the journals I reference, but I don’t believe any of my hunter heroes mention using a compass. Tanner grew up hunting with the Ojibwe who knew the forests, rivers and hunting grounds; there simply was no need of a compass. The same holds true for post hunters, but in both cases, that does not excuse the necessity of developing woodland navigational skills based on observations of nature coupled with a keen awareness of the terrain.

Although the compass served as a safeguard, it also pointed up both personas’ lack of basic woodland navigational skills. In essence, Msko-waagosh has a lot to learn if he hopes to return to the sanctity of his humble wigwam…

4 Responses to The Still-Hunt Back