Time slipped away this week, modern time that is. The same happened three weeks ago. Thoughts of grouse cartwheeling from a glorious cloud of white sulfurous stench oozed into oblivion with nary a flush, but perhaps with the utterance of a naughty word. Msko-waagosh would never do that, but I did. 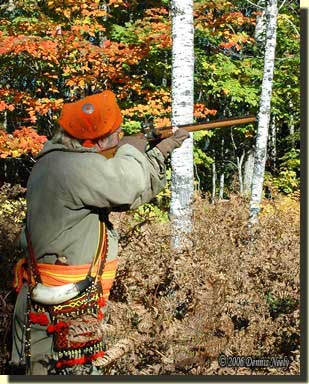 The anticipation of the trip to Lake Gogebic in Michigan’s western Upper Peninsula exceeded the event, at least on the grouse hunting front. The correct 18th-century preparations make little difference if the “partridges” (the name my hunter heroes used to describe the ruffed grouse) don’t cross time’s threshold, too.

Grouse hunts aren’t that common for either of my personas; the last one was in late September of 2006, or I should say 1796, near Onaway, Michigan. The trading post hunter flushed eight or nine birds that day and got off two shots. A ruffed grouse is one of the few game birds or animals that “Old Turkey Feathers,” my Northwest trade gun, hasn’t brought to the family dinner table.

Several avid bird hunters told me how great the grouse hunting was in and around Lake Gogebic, which swelled my hopes. In his mind, my alter ego expected more flushes than in Onaway…

Tami and I traveled to Lake Gogebic for the Michigan Outdoor Writers Association summer conference in mid-September. MOWA writers come together twice a year, and I had to miss the February meeting at the Ralph A. MacMullan Conference Center at Higgins Lake. When the dates were announced, a scheduling conflict put a dark cloud over this conference, too. Mark Sak and Tom Lounsbury kept pestering and finally convinced me I needed to attend. I’m glad I did. Thank you, fellas.

Tom Lounsbury—a good friend, radio host, and noted outdoor scribe—and I shared several grouse chases. We had a wonderful time. Tom Pink, a popular columnist with Michigan Outdoor News, joined us on Saturday, and the three of us enjoyed another great day afield. He hunted with a 12-gauge percussion double-barrel shotgun I brought along, just in case someone wanted to try hunting grouse with a black powder arm.

But MOWA conferences are more than hunting or fishing trips. Such outings offer a tremendous opportunity to learn, ponder circumstances and improve one’s writing and photography skills. We share breakfast, lunch and dinner and the pressing outdoor topics of the day are foremost in our discussions—along with some good-natured kidding. In the evenings, some pull up a chair and rehash the day’s doings. 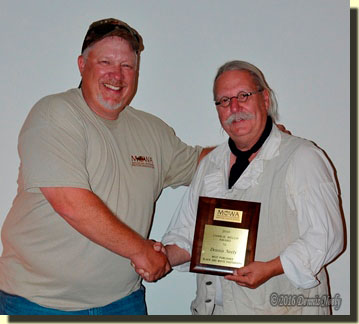 At the summer conference, the Saturday night dinner ends with the presentation of the MOWA Excellence in Craft Awards. I was shocked, humbled and honored when my name was called, more than once. I was truly blessed, receiving four first place honors: the 2016 Cliff Ketcham Award: best hunting outdoor feature, a traditional black powder hunting story, “Fooling ‘Old Lady Gray’;” the James H. Hall Award: best outdoor feature highlighting non-hunting, a black powder shooting sports missive, “An afternoon African safari;” the James A. O. Crowe Award: best contribution as a columnist for the “Black Powder Shooting Sports” column published in Woods-N-Water News: Michigan’s Premier Outdoor Publication; and the Charlie Welch Award: best published black and white photo for “I have knives,” an image that appeared in the February 2015 issue of Muzzle Blasts: Official Publication of the National Muzzle Loading Rifle Association.

MOWA was founded in 1944 and is a non-profit organization that includes outdoor writers, editors, photographers, broadcast journalists, lecturers and public relations specialists. MOWA members are dedicated to the preservation and conservation of the state’s natural resources and the practice of stewardship and good sportsmanship in outdoor recreation. Mort Neff, Ben East, Fred Bear, David Richey and Gordon Charles, to name a few, were all MOWA writers, as were the folks the awards are named after.

For me, one of the major takeaways from these awards is that the black powder shooting sports and traditional black powder hunting are relevant to Michigan readers, and that this handful of stories were judged by some of the best writers and editors in the country as  being topnotch. I doff my headscarf in thanks to the many folks who take their valuable time to answer my questions and help me with the photos and quotes that accompany my scribblings. Thank you, all!

Updating my author web site, dennisneely.com, has been on my “to-do list” for some time. However, life always seems to get in the way. At any rate, I’ve spent the last week and a half updating the site—spurred on by several conversations at the MOWA conference. There’s more to do. There always is…

The portfolio format is changed, and I’ve posted several of these award-winning articles. They are not new to regular readers of Woods-N-Water News, but I hope some might enjoy the feature stories.

In addition, I made a pledge to “make it to the woods every day in the month of October,” and I’ve only missed one day, and that was due to the wagon trails being too wet. I don’t need more property damage to repair.

And I’m down to sanding the stock of the Northwest gun that’s been lurking in the closet all these years, too. With any luck that smoothbore should be ready to shoot by the first of next week, then the final finishing can begin. To accomplish one project, others have to take a backseat, which is why I haven’t posted a new story to this site in the last two weeks. Dear reader, I trust you will bear with me…

Until then, make it to the woods, be safe and may God bless you.

4 Responses to “Make it to the woods…”