Black powder rose in the brass measure. The charge tumbled to the breech of the pristine barrel. Excited fingers rolled a few strands of wide-bladed green grass into a ball, equal in size to the hand-cast round ball. An index finger pushed the wadding into the muzzle. The leaden sphere rested on the matted grass. The rammer slipped from the Northwest gun’s shiny ribbed thimbles, turned end-for-end, then guided the wad and ball down the bore. Firm pressure seated the grass and ball upon the powder charge. In a moment, the rammer seated a second, smaller wad over the ball, for safety sake.

Moccasins plodded all of sixteen paces. Once sitting, a thumb over the horn’s spout distributed a thin layer of fine black powder granules in the open pan. With the frizzen in place, the hammer at half-cock, the bright brass butt plate eased to an anxious shoulder. A muffled click brought the English flint to attention. The turtle sight’s base visually rested upon the protruding tang bolt; the top of the blade held steady on the target’s black cross. Eager air exhaled. The trigger crept. The English flint lunged. Sparks showered. Powder flared.

White smoke boiled beyond the Northwest gun’s muzzle. The afternoon breeze pushed the sulfurous stench back in my face. I took a deep breath and sighed, then looked downrange. A black holed stared back, sitting in the lower left quadrant, 3/4-inch left of center and 1 3/4-inch low.

“It sounds like a trade gun,” my wife, Tami, said. “And that’s not bad for the first shot. Can I shoot it?”

The Thrill of a Flintlock’s First Shot

Life progressed in slow motion on that fine Sunday afternoon. Each step in the loading process, at least for that first shot, seemed to take forever. To be fair, I was trying to make sure I made no mistakes. After all, I wasn’t shooting for group or to post a 50-5X target. My only concern was testing the function of a new Northwest gun before I began the final finishing.

I said I was only going to shoot three shots, but I had to force myself to quit after five. I was having too much fun. Even after forty-plus years of shooting muzzleloaders, the thrill of the first shot from a new gun, be it fresh-made or well used, is still there, along with the nagging desire to do better on the next shot.

Tami got a little impatient after the third shot, so I let her shoot two shots before I finished. The length of pull is too long for her, plus she struggled getting the sight picture, but her eyes lit up just as much as mine did after her initial “Kla-whoosh BOOM!” 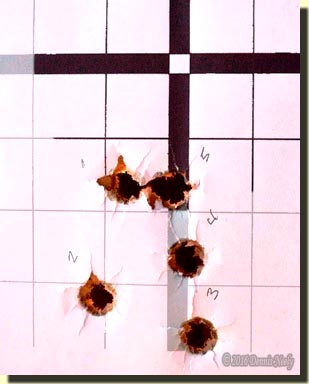 She retrieved the target while I swabbed the bore and wiped down the lock and pan. The barrel showed little fouling. A few black fingerprints on the cream-colored maple stock added some “just-used patina.” Unfortunately, sanding and whiskering will erase the evidence of the musket’s initial test firing.

The third, fourth and fifth shot aligned on the vertical axis, walking closer to the center each time. The end group from that first session was better than I expected: 1 3/8-inch wide by 2 1/4-inch high, centered 2 5/8-inch low and 1/2-inch left. If the new owner uses the same sight picture I use with “Old Turkey Feathers,” this gun will shoot dead on.

Starting with a slab of wood, a barrel, a flint-ignition lock and a few assorted pieces and ending up with a reproduction of a 1789 Northwest gun made by Robert Barnett of London is a major challenge, at least for this traditional woodsman. And this particular gun has involved quite a journey over time, both modern and yesteryear. But that odyssey is almost at an end, and as fate would have it, another waits.

As I ran a dry patch down the bore, I offered a prayer of thanksgiving for being blessed with the skill, dexterity and patience to manufacture the artifacts I need to engage in this crazy obsession with the 1790s. There I stood holding a Northwest gun, the fruit of many hours of enjoyable labor. A while earlier I loaded a round ball cast by my own hands. The shot pouch and most of its holdings I made, with the exception of the brass powder measure and the ball bag slipped under the Christmas tree by my good friend and fellow traditional hunter, Darrel Lang.

And then there are the hand-sewn leggins, breechclout and trade shirts that add texture to my humble time travels. The feel of linen rivals the exhilaration of a new gun’s first shot, at least for me. The gentle scratch of wool under snugged, trail-worn buckskin garters adds to the ambiance, as does the cooling gusts that flirt with the bare skin of an upper thigh.

Like an intricate puzzle, the 18th-century pieces must fit together as elk moccasins whisk along the trails that crisscross both forest and fen. If not, there is little hope of passing through time’s portal, little chance of experiencing daily life in a bygone era.

From moment to moment the emphasis on the three elements of traditional black powder hunting—the historical word, the arm using black powder as a propellant and the simplicity of a fair-chase pursuit—varies. Sometimes a few words from a hunter hero’s written recollections take the fore, other times the one-on-one intrigue of a backcountry woodsman pitting his or her wits against a forest tenant takes precedence, and sometimes the feel of a fine flintlock trade gun is all that is needed to slip back in time.

Unfinished maple and dull metal contribute little to the journey back to the 1790s. Stained stock-wood, browned steel and tarnished brass are another story. But despite that caveat, holding a new Northwest gun, smelling the burnt black powder and seeing those five holes on paper sure do pump up one’s excitement level.

Within the confines of the traditional hunt there is no thrill that compares to that of taking the first shot with a flintlock trade gun of one’s own manufacture. And the joy is compounded when a best friend comments that the gun “sounds like a trade gun.”