Light snow dusted a myriad of deer tracks. The comings and goings offered promise, tempered with the knowledge the hillside recorded the past, not the future. Ice crystals clung to mustache hairs. Fingers tingled. A purple raspberry switch tugged at the dangling corner of a red trade blanket. In the distance, at the next homestead to the east, a heifer bellowed. The woeful sound echoed over the big swamp. That cow became an unwanted distraction that evening, in the Year of our Lord, 1796. 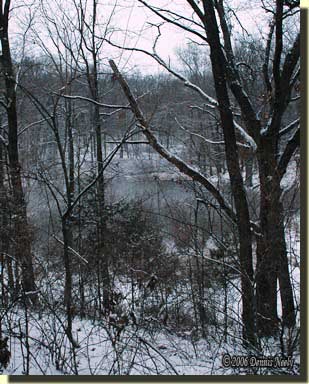 The afternoon’s circular stalk meandered around the downwind side of the cedar grove, skirted the meadow and then progressed off to the steep, hardwood-covered ridge that overlooked the long expanse of sedge and canary grass. What appeared to be a single downed oak top turned out to be a dead oak that toppled hard against a live one and broke the main south branch. The tangle begged for a sit-down pause before the still-hunt might continue.

The south side of that woodland tragedy seemed like the best alternative for a make-shift fortification. A whisper of a southwest breeze teased a gray rat-tail of hair. A winter moccasin scuffed away ankle-deep snow. The wool bedroll dropped into the nest and after a careful look-see, Msko-waagosh adjusted the folds of the trade blanket that wrapped about his body and sat cross-legged upon the bedroll.

A fox squirrel chattered behind the debris pile. A gray squirrel scampered high up in an old red cedar tree to the south. Two blue jays chased from bough to bough on the far side of the swamp near the poplar trees. Nary a deer ventured close.

Pulled tight, the four-point blanket offered warmth as the temperature dropped and dusk approached. A faint hint of orange crept up from the horizon, signifying time to continue on with the still-hunt. To the west, off near the River Raisin’s open water, a goose called, “Ke-hoonnk, yee-ooonk.” My alter ego chose to wait.

“Ke-hoonnk!” The crisp decisive tone came from just over the far tree line. Not a minute later a solitary goose passed just above the treetops, straight up, winging hard to the east. Long black primary feathers whooshed. Another “ke-honk,” this one resounding in the hardwoods, foretold of imminent good fortune. My nose dripped. My eyes searched for movement. Arteries pulsed. Sore hips scooched side-to-side. An eager thumb fiddled with the Northwest gun’s hammer.

Tiny white snow balls began falling. Some stuck to the blanket’s nap, while others bounced off. The heifer resumed bellowing, but this time far enough north to belie its untimely escape. More geese rose up from the river, or so it sounded. The ke-honking pressed eastward. In time a long string of the wild, long-necked fowls crossed over the hidden lake sequestered in the tamaracks to the north.

“It’s going to be a cold walk out,” the lead holder scribbled on the folded paper. “A magnificent end to daylight—beautiful, yet stark and deadly—peaceful solemnity. I shall sit at the behest of a lone goose…”

The moon grew brighter and visibility ebbed. Off in the distance, a coyote barked. To the west an owl hooted. “Who cooooks for yooou,” it asked. And indeed, the walk out of my alter ego’s wilderness Eden was cold and difficult. The temperature seemed to drop with each step. The wind picked up, and I thought of Jonathan Alder, himself a white captive who returned to the settlements in later years.

Alder was too young to hunt on his own, so he accompanied Big Turtle on a day hunt. They killed a deer, skinned it and hung it, then started back for the camp. Along the way, Big Turtle killed a turkey. When they came to the prairie they had crossed earlier in the day, Alder realized he was cold.

“Presently, we struck the prairie and the difference in temperature was so great that even if I had stripped off half of my clothes in the timber, I could not have felt the cold more intensely…” (Alder, 67-68)

Young Alder began to get numb and “threw down the turkey.” He fell “three or four times in the snow.” Big Turtle recognized Alder’s state of dismay, retrieved the turkey, then turned his attention to Alder:

“…We had about two and a half miles to go before we got to the timber. He took me by the hand and told me to run and he ran with me, carrying his gun and the turkey and encouraging me to hold out and help myself if I could. As soon as we struck the woods, there was so much difference in the temperature, it was as if there had been a blanket wrapped around me…” (Ibid)

The choice to spend the rest of that hunt seated within the confines of that treetop was a conscious one. I knew the walk out would be uncomfortable, but often times, so is the glorious pastime we call traditional black powder hunting, uncomfortable, that is. But that decision was not based on sound reason, rather a foolhardy notion that dates back to my youth—and geese that fly overhead.

Eighteenth-century memoirs are filled with superstitions—and tried-and-true axioms that are based on what appears to be superstition.

“The Indians have a great many superstitions and prejudicial notions about things and one is in regard to the wolf. If all kinds of hunting, you are liable to shoot at game and miss. If an Indian shoots at a bear, deer, or buffalo and misses, he thinks nothing of it, but if he shoots at a wolf and misses, he thinks that the wolf has put a spell on his gun that will last for five or six moons—your gun will shoot wide for about that length of time before the spell wears off. You are liable to miss and lose a great deal of your game in that time unless you un-breech your gun and scour and wash it thoroughly clean…” (Ibid, 95)

In my youth, deer were scarce near the headwaters of the River Raisin. I did not consider this area part of the Old Northwest Territory, at the time. Seeing one doe might be the highlight of the day. Now, after the outbreak of epizootic hemorrhagic disease (EHD) in 2012, my deer hunting has gone full circle, to the point that seeing one deer is again a treat.

By my late teens, I noticed a correlation between seeing deer and the flights of Canada geese. If geese flew close, I saw deer far off, and if geese flew directly over me, deer came in close by. And if a lone goose happened over, then a buck was not far behind. Really, do you have to laugh? 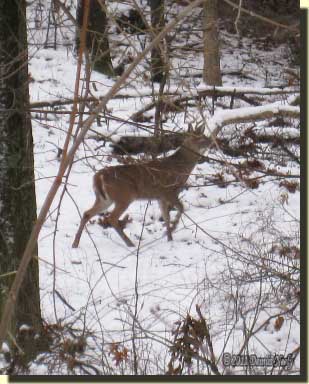 Anyway, even in those early years, the thought seemed foolish, but it worked a majority of the time. At one point, I suspected the correlation was due to the time of day and the natural movement of God’s creatures, but that did not explain a single goose at mid-day and the nice buck that followed.

As I walked out that night, I realized this notion (notice, I can’t bring myself to use the word “superstition”) was ingrained in my hunting practices. I never gave sitting tight a conscious thought after the lone goose flew over. And yet, the idea was contrary to my plan for the rest of the still-hunt, a still-hunt based on deer movements I had observed over the days previous. In essence, I changed a well-reasoned plan based on questionable conclusions from chance happenings.

In my own defense, on more than one occasion I have observed champion shotgun shooters chase down one errant death bee that spilled out when the rest of the swarm clattered down the bore. It’s called “saving the golden BB,” and it is assumed that that one projectile is the one that will break the bird. Tami laughs at me when I do the same, but it works—especially with wild turkeys! Honest, it does…

And on that evening, a deer never showed up, at least not while I sat tight. I suppose some might think that disproves the theory, but maybe a fine buck wandered by after I left? There are, after all, unexplained mysteries associated with these simple pursuits. The old journals are filled with them, and as living historians, we stumble into plenty of our own. For my part, on that December eve in 1796, I chose to remain in the treetop—at the behest of a lone goose that happened by…

Oh, and if you start paying attention to what happens after a wild goose flies over your alter ego in the midst of a deer chase…shame, shame, shame…

One Response to “…at the behest of a lone goose…”