Geese rose from the River Raisin. Three became nine, then fourteen. The broken string winged south, then swung east. None spoke or looked about as they flew. The bottomland, the gentle west-facing hillside and the white ash tangle held nary a hint of activity, not even a frolicking fox squirrel. A lone crimson cardinal perched on a witch hazel’s upper twig, but remained silent. 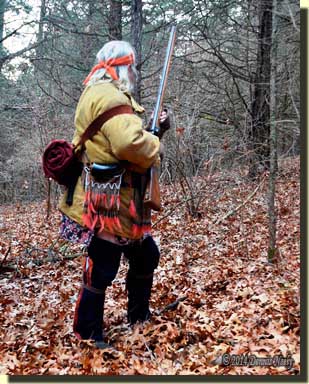 Buffalo-hide moccasins proceeded on with the evening still-hunt. The earthen path snaked through the oak-leaf carpet and skirted a muddy bog. Admiring the golden tamaracks occupied two pauses, maybe a dozen paces apart. A few steps from being able to see over a small rise, a doe’s ear twitched, bedded one bush inside a barberry tangle, sixty-plus paces distant and upwind.

A linen-clad shoulder settled against a white oak tree. The Northwest gun’s tarnished brass butt plate eased to the ground. The doe spent most of her time glancing away. After fifteen or so minutes of careful watching, I felt this deer was alone.

Like the geese, I chose to swing around this whitetail. My moccasins retreated a bit. My course dropped back down to the edge of the bottomland. The still-hunt continued with the rise acting as a makeshift shield. I could not see the barberries, and the young deer could not detect my stealth. Such was that evening’s wanderings in late-November in the Year of our Lord, 1794.

Sometimes my words miss their mark, not unlike an errant round ball from a favorite smoothbore. The magazine article in question spoke of coming onto a doe during a still-hunt, stopping to observe her, discovering more deer and then taking a seat behind a scrawny red cedar tree as the deer approached. This sequence of events is common to a still-hunt, at least for the historical me, be he a lowly hunter for a backwoods trading post or the returned white captive who won’t abandon his Ojibwe hunting practices.

When a loyal reader says, “I didn’t get it,” this writer cringes and jumps right into “introspection mode,” examining how or why the pen went awry. A part of the problem rests with my assumption that most hunters are familiar with still-hunting, which is not the case.

I grew up stalking and still-hunting, because I didn’t “know any better” when Frank Hubbell described how the Ojibwe woodsmen in the Upper Peninsula stalked deer. I tried the methods Mr. Hubbell told about and they worked—once I perfected my sneaking skills a bit. There is, after all, a learning curve to all outdoor endeavors.

The second obstacle that I often overlook is the cult-like acceptance of lurking in trees or “people boxes,” as Tami calls the explosion of deer-hunting houses. To hear some modern tacticians tell it, strolling through the forest looking for game is an archaic idea with no merit whatsoever. The only possible way to kill a deer is by hiding in a tree or shanty.

Oh, and the “scent boys” are overcome with “the vapors” at the very thought of wandering about field and fen in linen and leather. One local family in particular has a mowed two-track that connects all of their outhouses and owl perches. An hour before dawn, the fellow who drew the shortest straw drives the others around and stops at each deer house or tree stand.

“That way,” the logic goes, “the deer don’t know which stand is occupied and there is no human scent going to or from a given stand.” Really, did I not see a truck’s headlights drive through the field? I suppose a flashing neon sign broadcasting “We’re out hunting”…oh, never mind.

The notion that drives any still-hunt is, “see the game before it sees you.” In the case of the published story in question, I wrote:

This situation presents itself, in varying forms, on many still-hunts. Msko-waagosh, the Red Fox, saw the deer before it saw him, which is the goal of any ramble through the glade. Not only was that day’s still-hunt a success, the circumstance came close to resembling one of John Tanner’s 18th-century recollections:

“…As I was one day going to look at my traps, I found some ducks in a pond, and taking the ball out of my gun, I put in some shot, and began to creep up to them…” (Tanner, 60)

Like Tanner, Msko-waagosh intended to take full advantage of coming up on the deer without their knowledge. At that instant, the returned white captive weighed several options: he could continue on and attempt to pass without spooking the deer; he could continue to stand until the deer moved on; or he could seize the first opportunity and seek better cover. The latter choice offered the greatest probability of remaining undetected.

A number of years ago I found myself in a similar predicament. I came upon a mature doe, bedded thirty paces distant in a light snow squall. As in the magazine article, I stood still for a fair amount of time. Another doe, what looked like that summer’s fawn, rested about ten paces downhill from the first doe. When the opportunity arose, I stepped behind a cedar tree to break up my deathly shape.

The smaller deer looked all about, then tucked its snout under a hip. Its eyes drooped half shut. The bigger doe showed a similar lack of concern as bigger flakes fell. Instead of surveying the hillside every six or eight seconds, this deer kept an almost constant vigil looking upwind, away from me.

One of the first lessons learned for stalking is to “time the animal.” Most deer will check their surroundings with consistent glances up and about. The trick is to learn how often those glances occur, which is the basis of my “every six or eight seconds” comment above. Once that time is established, the woodsman has a better idea of when he or she can move and when to stand fast.

That bedded doe timed out at 20 or so seconds, if I recall. Sitting on a bedded deer is not productive, unless that deer is a buck or one of the group is a buck. I have done that, too, with good success. But on that morning, I chose to continue the still-hunt. It took little effort to back away, angle up and over the ridge and pass those two, which is why that incident is so memorable.

The second option is a little trickier and carries a greater probability of spooking deer. In the above story, I “stepped behind a cedar tree to break up my deathly shape.” Standing in plain sight is not a good choice if one wishes to avoid detection on a still-hunt. Yes, you saw them first, but when they see you ten seconds later, snort and flee, you did not accomplish the goal of the still-hunt. Thus, a part of any still-hunt is choosing a path that keeps the hunter in as much cover as possible.

As easy as it sounds that is not always the case. When caught in the open, with no cover close by, I usually chastise myself for the poor choice of path, and then, at the first possible opportunity, I sit. This turns a two-legged interloper into more of a “bush-shaped blob.” And with that in mind, I often lean forward and move my arms out a bit to accentuate the image. If it is cold and I’m wearing the blanket that helps, too.

To be fair, the “caught in the open” scenario occurs most often when deer are moving through an area. They come into the hunter’s line of sight, pass through and continue on, which works to the still-hunter’s advantage. 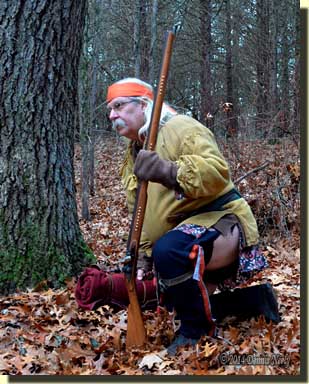 The third option, stopping the still-hunt and taking a stand in available cover, “treeing” if you will, is a natural extension of the notion of seeing the game before it sees you. Instead of sitting in a people box and waiting for the deer to come to you, the woodsman attempts to find the deer. Once that is accomplished, the next concern is getting in position to wait on the deer, and with any luck take a humane shot.

This is the course of action Msko-waagosh took in the magazine article. One reader asked why I didn’t put a popup blind in that location in the first place, another wanted to know if there was a tree stand close by. One chap asked if I had a scent-blocking suit on under the “old clothes.”  In essence, the modern hunters who commented on that 18th-century tale have little idea of what a still-hunt entails and the benefits that can be derived from such a ramble through the glade.

In the end, the historical me returned to the woods and continued on still-hunting right up to the last day of Michigan’s muzzleloading deer season. The folks around the North-Forty kept climbing trees or peering out a thin opening in a people box. Thank heaven for time traveling…