It’s All Based on Experience

Grayed, brittle branches offered scant cover. That red cedar tree toppled eastward many winters before; a heavy wet snow uprooted it. Back then the boughs were thick and lush and provided a formidable palisade. A few judicious whacks with a sharp-edged tomahawk cut an ample nest. Again, on a cold December morn, a brisk northwest wind necessitated a second chopping on that tree’s opposite side.

The following spring the death bees swarmed from the first lair; a fine, long-bearded tom turkey died that morning. An old hen met her demise in early November; the year escapes me right now. The upturned roots, still packed with sandy soil, hid a trading post hunter’s entire body, all but the Northwest gun’s muzzle.

A few years later, in the midst of a snowy deer hunt, eighteen or so wild turkeys surrounded the tree. Tamara sat in the north hollow and I in the south. The bronze beauties had nary a clue death lurked so close. After pecking a while, they circled south and flew up to roost. Big wings flailed and thrashed, lost feathers floated and one or two squawked their displeasure when we stood up. We both laughed and neither of us will ever forget that night.

Oh, and two falls ago a dandy buck with a broken left beam rubbed a stout autumn olive branch bare, then angled uphill through the thick cedars that pepper that little knob. Between the roll of the hill and the placement of trees, the trade gun’s tarnished butt plate never rose.

On that morning in 1795, trail-worn winter moccasins shuffled on in darkness. The root ball’s dirt was washed away, the trunk had settled to the ground and the dead branches no longer aided a hunter’s purpose.

The bedroll plopped down beside a large cedar, maybe a dozen paces downhill from the old haunt. “Gob-obl-obl-obl! A single, abbreviated gobble resonated up the knoll as I sat cross-legged against the cedar.

A few minutes later a hen spoke from a roost tree not that far to the south, “Ark, ark, ark, ark.” Another answered to the north, and I found myself thinking about that snow squall in November and all those birds pecking around us. As it grew lighter, a turkey’s silhouette appeared to the east. Its head fidgeted from side-to-side and up-and-down as it tried to evaluate the blanket-clad lump that sat beside the cedar tree. 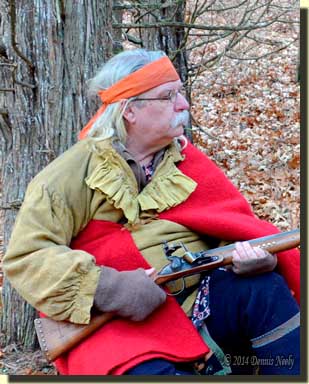 Upwind, ears flipped just over the rise. The antlerless deer seemed in no hurry. The ears dropped, and in a matter of seconds popped up again. A second pair of ears joined the first. Both deer lingered in that spot for about fifteen minutes before vanishing.

In time an older doe and two yearlings walked north on the lower trail. The three slipped behind a massive, fallen oak limb that still held its browned summer leaves. The last deer kept glancing back. The Northwest gun’s muzzle eased in her direction.

The three re-appeared. I watched them out of the corner of my eye as I divided my glances between where I had seen the first doe and where the lower trail emerged from behind the rise.

A short while later, another pair of ears flipped and flicked. This deer sported two slender, forked beams, each curving upward perhaps eight inches. This young buck did not linger. In a handful of heartbeats, he dogged the lower trail with his shiny black nose just above the earthen ribbon.  He moved with a slight air of caution and stopped four times, each offering a doable shot for “Old Turkey Feathers.”

Perhaps forty minutes later, the scenario repeated itself. This young stag had a three-point beam on his right side and a stub broken off just up from his left brow tine. His movements matched those of the fork-horn, but when he appeared on the lower trail, his pace quickened, presenting only one shooting opportunity before passing behind the brushy oak limb.

The buck paused, shrouded behind the mass of curled brown leaves. If not for a twitchy left hind leg visible through an opening in the tangle, a woodsman might have thought this buck turned east and disappeared in the big swamp’s sedge grass. The pause seemed temporary, but provided enough time for that same woodsman to turn his body in anticipation of a shot, if he so desired.

Minutes fell like autumn leaves, enough so that there was no question something was amiss, at least in that buck’s mind. I wondered if he sensed my presence or scented a wayward whiff. When he advanced he did so with great caution, broadside chance after broadside chance. Thirty paces distant from the limb, the trail jogs west a bit. He stopped there, raised his snout high and jerked it up-and-down, indicating the reason for his concern. In time he put his nose to the trail and walked on.

Discussions of late have centered on deer hunting. A number of times the questions gravitated to knowing when to take a shot. I find it interesting how thought patterns seem to flow along similar lines. I often wonder if the impetus for such inquiries is a post on one of the social media, a magazine article or television show or if the commonality of a given subject is spontaneous.

The adage that jumps out of my mouth is: “Your first shot is your best shot.” Now there are two ways to look at that statement, the first being, “make your first shot count,” and the second being, “take the first good shot.”

In both instances the unsung hero in the advice is experience. On the surface, hunters, modern and traditional, interpret “experience” as actually taking a shot and learning from the resulting consequences of that shot. For me, as a traditional black powder hunter, that is not the case. By viewing the glade as a wilderness classroom, every encounter with game is a learning experience, or should be.

Of course, the first consideration is the woodsman’s ability coupled with the limitations of his or her chosen black powder arm. After determining an “effective distance,” one must factor in the probability of completing a clean and humane shot placement. The closer the shot is, the higher the probability of success.  Balanced against this is the reality that the closer the game gets, the greater the chance of being scented or detected. And once again, the discussion returns to actual experience as a deciding factor.

Setting aside deer that approach or will pass downwind of a chosen lair, the goal of any traditional woodsman is to become an active tenant of the forest. In essence, each tenant goes about its own business without hampering or spooking the other tenants. So when the first deer’s ears told of its presence, the challenge for me was to go unnoticed by my peers—those deer. Over the course of their passing, I achieved that goal.

Now years ago, I took this task to a different level, at least on a somewhat selective basis. As deer entered “Old Turkey Feathers’” effective distance, like the various deer that morning, I would mount the trade gun and watch over the barrel as the creatures passed. As they came closer, I decided which shot or shots were “the best,” and I did the same as they left my area. If the deer slipped by unaware, I achieved my goal, and if they didn’t, well, I learned a valuable lesson.

I no longer follow this practice, because I don’t need to. I understand the problems of getting the smoothbore up, moving with the deer and picking the best shot. Yet, as on that morning, I still evaluate every move every time I encounter deer or turkeys or squirrels. In so doing, I spook my share of critters, and definitely more than hunters perched in a tree or sitting in a people box.

This practice is a version of my game of “Spies and Scouts,” but that will have to wait for another post. The point that I try to make is learning when to take a shot is an ongoing woodland experience. The lessons are out there, and they start the minute game is spotted and they don’t end until that game passes through or runs off. There is nothing magical about it, no mystic formula is involved—it is all based on experience.

The same lessons hold true for deer passing downwind of the woodsman’s humble ambuscade. Knowing where one’s scent is traveling is an acquired skill, founded in trial and error learning in the wilderness classroom. Scent currents follow different paths in different locations. On that hillside, the large cedar tree where I sat is more “scent neutral” than the oak that is ten paces to the east—again, learned by experience.

In this situation, the trick is to balance the effective distance against the deer’s approach against the point where scent detection is probable. The result of this evaluation process is the selection of a location for taking that first, best shot. The key is to view each encounter as a classroom exercise, rather than sitting and waiting for the deer to pass and gaining no new knowledge.

Give traditional black powder hunting a try, be safe and may God bless you

2 Responses to It’s All Based on Experience